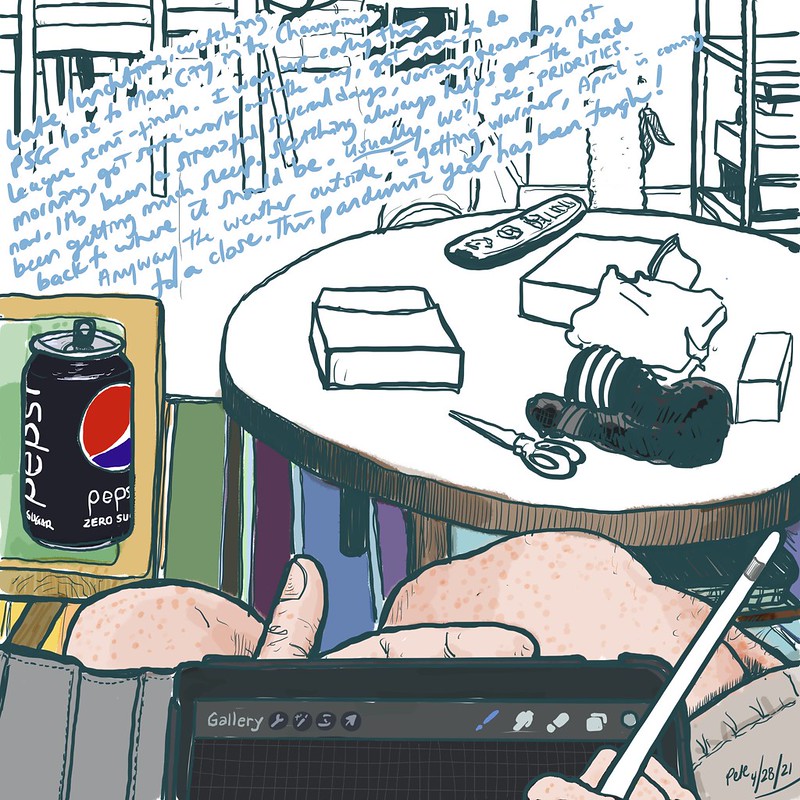 I mean, this is my main view a lot, looking over the top of my iPad, on the couch, a can of Pepsi Max (sorry, Pepsi Zero Sugar), my knees. We saw all the drawings of my house a year ago (see petescully.com/tag/uskathome/ for some of them). I was having a bit of a tough week, touch couple of weeks, I think we’ve all been getting a bit like that, but there are days when you just want to focus and get the head straight. I wasn’t sleeping too well, and on this day I got up super early and started doing some work. By lunchtime I was already exhausted again, so I sat on the couch while Paris St. Germain played Manchester City in the Champions League. That was the first leg, when PSG had a great first half but fell apart in the second. I liked James Richardson’s description of the game, that “Parisians were losing their heads like it was A Tale of Two Cities, which in a way it was, the worst of the halves and the best of halves”. I wish I could have thought of that. I think of funny things sometimes but I forget them, and other people do too. Sketching often helps, it’s where I go when I need to go somewhere. That was the case at every age. I like drawing on the iPad to just mess about. I use Procreate to draw, but I use Notability a lot to write notes with, and doodle like I would on a notepad in a meeting. Constantly doodling. Ahhh, I need a sketching trip, a proper trip where all I do is go around by myself drawing everything, but right now even the thought of it exhausts me.