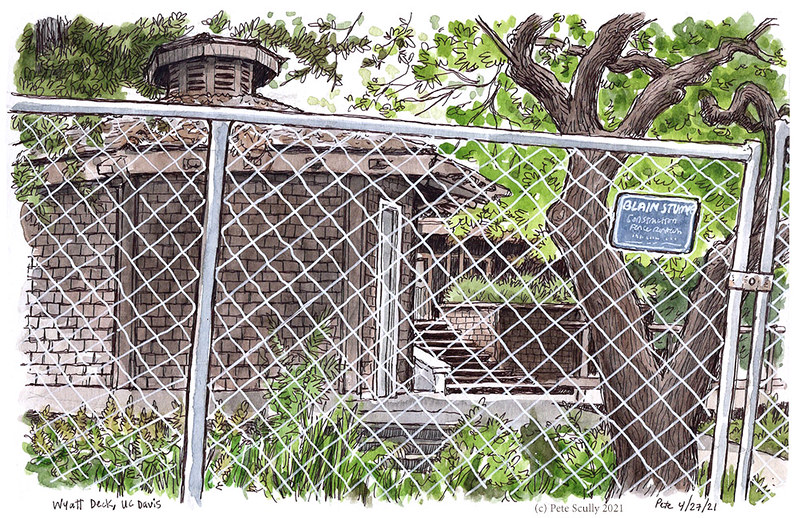 Wyatt Deck, in the UC Davis Arboretum, is going to be refurbished. Or is it Remodeled? Or Rebuilt? Renovated, that’s the one. I couldn’t remember my “re-” word. At least it’s not “reimagined”. That’s the buzzword right now, everything is being “reimagined”. Russell Boulevard in Davis is being reimagined. The workplace is being reimagined. I’m half expecting all those celebrities from that awful video last year, when the pandemic was only a couple of weeks old, to come out with a sequel, “Reimagine”. That was terrible wasn’t it, an early embarrassing low. But while the world is reimagining reality, Wyatt Deck is being renovated and the fences have gone up already. I’ve drawn Wyatt Deck before, a few times, we’ve had sketchcrawls here. I did a two-page panoramic in 2014. This renovation will be a long project, with the two decks actually being demolished and replaced by Winter 2022. According to the Arboretum’s website, the original redwood boards are rotten and may be unsafe, and it’s not particularly accessible by modern standards. So, renovation it is. I do wish I had come in for a longer last sketch, but I always have that one from 2014 and now I have this one with the fence, which tells its own story. It’s been here for over 50 years, and is named for Fred S. Wyatt. In fact when it first opened it was called ‘Wyatt Snack Bar’. Nearby is Wyatt Pavilion, which I drew in 2016 for the UC Davis Magazine’s Art Map (it used to be a livestock judging area located over near the Silo, but was moved here and converted into a theatre on the 400th anniversary of Shakespeare’s birth; actually I went to see Richard III there in 2013). Anyway, I came down here during lunchtime when I was on campus this week (working from home I still have to come down to the office a couple of times every week; we’re planning on a full return in the Fall, but we are ‘reimagining’ how we all do things, so we’ll see what it looks like). I needed to sketch. I think I missed the window for most of the colourful plants that burst out in March and April but the weather is getting warm and May is knocking on the door. As I write, here it is; welcome in, May, it’s nice to see you. The past week was a bit crap for me, and I was feeling pretty down on Tuesday, hadn’t been sleeping much. People, again it’s people, they make things so stressful. Sketching helps, a bit. Just being on campus does too, over the past year it’s felt like a familiar place of retreat, not simply a place of work, somewhere I’m genuinely part of. So I drew this, a beloved old place I always liked going to, for the last time. And I made sure to include the fence in the foreground going right across it. A beloved old place I always liked going to, I can see it but I can’t go to it. I mean, there’s a story right there. Isn’t there just. I’d really like to get back to England some time soon, to see the family, but I can’t. This pandemic, man. I’m vaccinated now at least, but the stress involved in flying for eleven hours, and then there’s long waits at Heathrow, plus self-isolation, quarantine, and then nothing being like it was, and that’s before the emotion of family stuff. A lot of people I know have passed away since I was last there, and the world is a different place. Fences are up, more than I’ve ever known. But there is hope. We will be back on campus this Fall, we’ll make it happen, we’ll all do our part. Things will be different. Hey, that’s the point of life isn’t it, change. Eventually, the solid old wood beneath our feet starts to get rotten, things that we thought worked once need updating for a new inclusive way of living, new places are imagined, new stories not yet written. It’s going to be ok. I think it’s going to be ok.