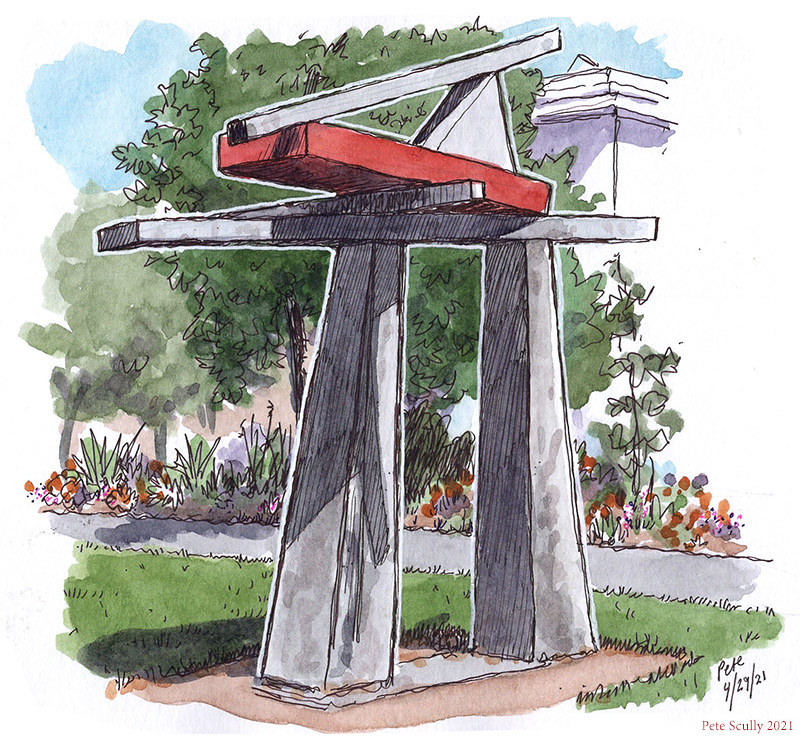 I’ve drawn this before. I’ve always thought it looked like a magic portal. Where would it go? This sculpture is actually called “Shamash” by Guy Dill, and was made in 1982. I’ve always wondered. 1982…I always say that my memory pretty much goes that far back, although I know I have memories from earlier, flashes really. In 1982 I was six, and I remember some things from that year clearly. The FA Cup Final replay, Spurs v QPR. I remember my older brother Johnny, who was at the game, came back from Wembley shortly before our neighbours, who were also at the game. We are spurs fans, they were QPR fans. My brother went to every home game at White Hart Lane in the 1980-81 and 1981-82 seasons. So my brother got the Chas’n’Dave songs on his record player, “Tottenham Tottenham, No One Can Stop Them” and “Spurs Are On Their Way To Wembley”, turned up the volume full blast, hung the speakers out of the bedroom window, and waited for the neighbours to get home. Everyone in the street came out, not to complain, but also to watch the QPR neighbours get back from Wembley. It was all good fun, we were a pretty close street. I do remember the Royal Wedding, Princes Charles and Lady Di, and that was 1981. We had a street party. Us little kids running around waving flags and everyone’s dinner tables lined up in the middle of the street with sandwiches and fizzy drink. There were games, and I distinctly remember my dad winning the “dad’s piggy-back race” with me on his back. I do have vague memories of the 1981 FA Cup Final win, the great Ricky Villa winning goal. I certainly have even earlier memories, I remember my Grandad, and he died in 1980. All I remember is him at his house on Blundell Road in Burnt Oak with my Nan and my uncle Billy, and I remember when he was ill, before he died. He was from Belfast. I have an old photo of him with me sat on his knee when I was about two, I’ve had that photo all my life. I have other memories from 1980. I had a small part in a BBC TV serial called “A Little Silver Trumpet”, and I remember going to the big round BBC TV Centre every day, I remember the sets, having greasy make-up put in my hair, I remember going to film in Brighton, I remember them just letting me draw and they just filmed me drawing, holding my pen in the same funny way. I have even older memories than that, I definitely remember visiting my Dad in “the Big House” which was where he lived until I was 4, and he’d always get a milk and a Yorkie bar. I remember walking around Burnt Oak with my big sister Jacqui and going through fields behind the houses with stingy nettles. I remember my uncle Billy taking me to see a film at the pictures that might have been Spider-Man. Memory is a funny thing, there are so many photos in albums and stories from others of events I have not really any memory of, but these things I always remember, things that belong to me. I’d say that from about 1982 though, when I was six, memories become a little clearer. I remember getting stuck in the snow with my mum down in Hendon, and it took a long time to get home, and we had oxtail soup when we did, and to this day I think of that when I taste oxtail soup. I remember that was the year we got central heating in our house. I remember getting chickenpox that year. I remember cutting up my pyjamas and pretending to be the Hulk, and getting into trouble because “my days of being the Hulk are long gone”, whatever that meant. I remember seeing pictures of the Falklands War on TV. I remember reading all of my brother’s Beano and Roy of the Rovers comics. I remember in 1982 going to meet The Tweets (the ones who wore bizarre bird heads and did “The Birdy Song”) with my friend Daniel, and I remember they wore big leathery gloves and did not talk. I even have a photo of that meeting. I remember my uncle Billy singing Come On Eileen in our kitchen. I remember playing in the sandpits at Welwyn Garden City. I distinctly remember going to see the Dark Crystal with my Dad and my next door neighbour Barry, and dropping all of my popcorn when Fizzgig appeared. At school the next week my friends all played Dark Crystal. “Another world, another time.” I am still obsessed with the Dark Crystal (I loved the recent Netflix series so much).  1982 was the last year when I was the youngest in the family, my little sister Lauren being born a year later. In my life 1982 was a really long time ago, and this sculpture has been around since that year. I’ve drawn it before. I’ve always thought it looked like a magic portal. Where would it go? Back to 1982? I mean, at least Spurs won a trophy that year. I always forget not to write posts like this, those “I remember when I was a kid” posts, but I suppose it’s part of getting older isn’t it, trying to keep remembering. Another world, another time.