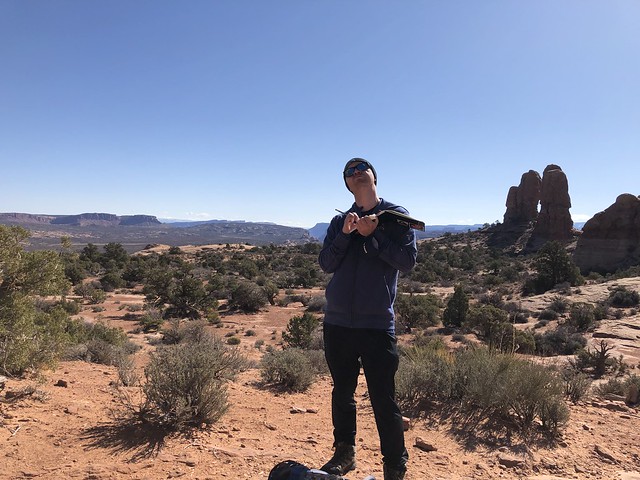 A couple of weeks ago, we took a Spring Break road trip to Utah. It took two days to drive from California across the mountains and high desert of norther Nevada (which is a much wider state than I thought; you look on the map, there’s a town or two but a lot of nothing, but in reality there’s a lot of grand scenery) (plus a few prisons; we saw signs for ‘no hitchhiking’) We stopped off in the Elko for the night, which seems to be a popular place for sleepovers when travelling across the country. I-80 goes from coast to coast, even through Davis. We passed into Utah the next day, crossing the expansive Great Salt Lake Desert, followed by a lunch of Belgian waffles and frites in Salt Lake City, before crossing snowy passes and sandy valleys to reach Moab, in southern Utah. I feel like I’ve seen a bit of America now, outside of the Sacramento valley. If we’d have flown, we’d have missed all of that. (But next time we will fly). Moab is the gateway town to the two national parks of Canyonlands and Arches, and there are even more amazing parks in southern Utah to explore, such as Zion, Bryce Canyon and Capitol Reef, not to mention various state parks. Now that we are officially hikers (we have the boots to prove it) we plan to explore more of these parks some day. On this trip, we started with Arches. We got into the park early, as all the videos say to do, and headed for the Windows section. That’s me above sketching one of them. My plan was that alongside our hiking and exploring I would stop occasionally to do quick pencil and watercolour sketches of the arches, taking no more than 10-15 minutes. This worked out well, so that we could have good rest stops. I practiced a lot of quick sketches before our trip, trying to find the right palette, the right approach, because this isn’t the same as drawing buildings at UC Davis. I started off with a quick sketch of the ‘Turret Arch’: 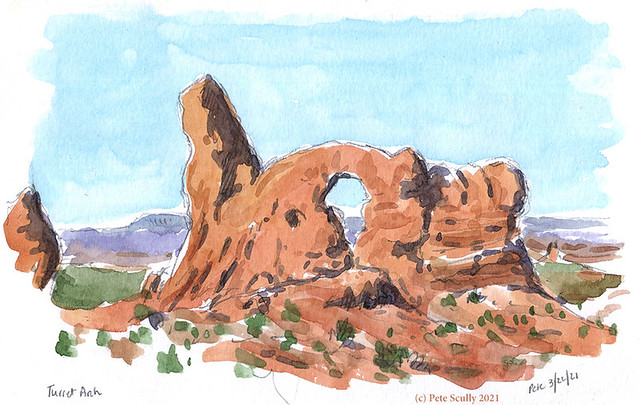 Next I sketched the ‘North Window’. There are two big arches next to each other, ‘North’ and ‘South’ windows, with incredible views over the plateau that makes up arches National Park. We learned a lot about how the arches were formed, that there was once a great sea here, and as the face of the planet shifted it was lost, but the salty waters evaporated to create a vast bed of salt, that for millions of years lay below the layers of rock, before it eventually evaporated causing the landscape to collapse into a world of arches and unusual rock formations. This is roughly what I remember. I want to study geology a lot more, looking at the rocks was illuminating. We are indeed fleeting specks in the lifetime of the planet; but what specks we are. I’m glad the National Parks exist to help protect these landscapes. They call the National Parks “America’s Best Idea” and I can’t really disagree there. It’s right up there with democracy, s’mores and having Diana Ross take a penalty at the 1994 World Cup opening ceremony. The Windows section was a good way to get oriented with the park, do some fairly easy short hikes, and take in the breathtaking landscape of red rocks and petrified dunes. 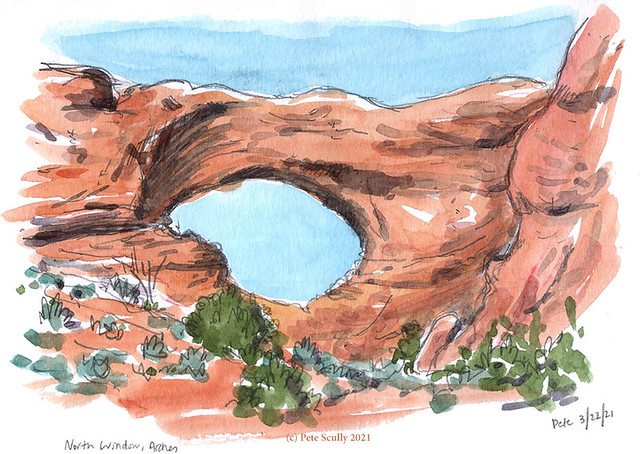 We then walked over to the nearby Double Arch. There were a lot more people in the park by this point, and the parking lots were filling up. We looked at a site that showed us the busiest times of day for each parking lot and planned accordingly, I’d say we couldn’t have planned it better. The Double Arch (not to be confused with the “Double O” Arch on the Devil’s Garden trail) was one that I had practiced sketching, but of course being there in person the real thing raises the heart rate. I felt like Anakin Skywalker would come whizzing through them in his podracer, chasing down that slimo Sebulba. I drew this in pen (the only one I did in pen). There was a family from India we spoke to, some of the kids went into the arches and played some music to make big echo sounds. The acoustics were surreal. I didn’t climb far into these arches myself, but could have spent all day looking at them , drawing and cacthing the light as it evolved through the day. But we had many more arches to see. I’ll write about Delicate Arch in the next post, that is the one everyone knows. 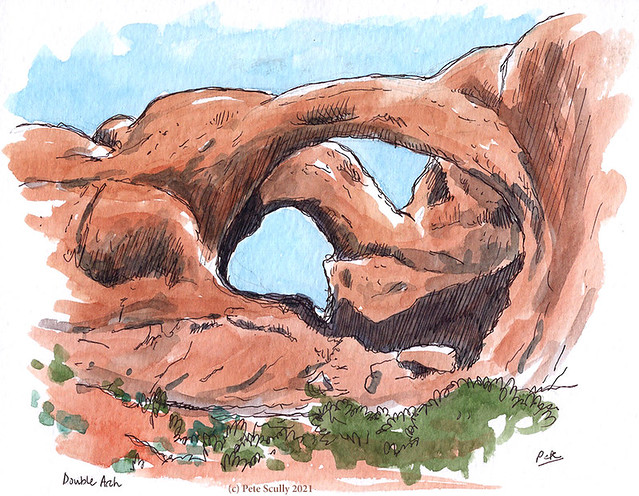