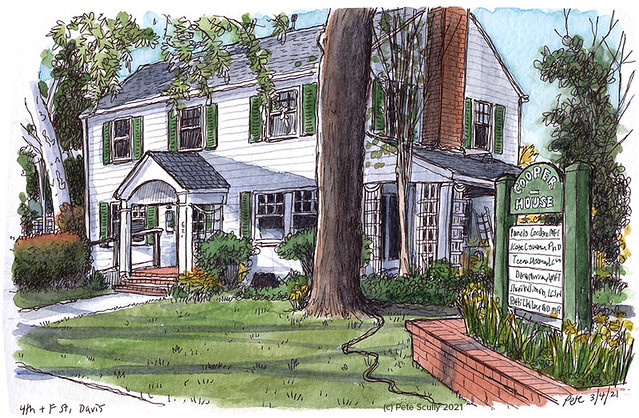 And so March 2020 finally ended and March 2021 began. It’s what it felt like, right? That’s what we all say. That super long March, remember back in May 2020 when we’d say “oh, today’s date is March the 70th” or stuff like that. That’s what people say, in their Tweets and their Witty Remarks. I am writing this in late March 2021, the day after receiving my second Covid vaccine, over a year after the pandemic officially began. I’ve learned of a word (from Rick Steves), “vaccication”, the first vacation you might have after being vaccinated. We had a road trip to Utah last week to go hiking in Arches national park (I’ll post the sketches soon, what a place), but flying international might still be a way off for us, with how things are, though I hope it’s not too long before I can get back to see the family in London. In the meantime, more Davis. This is Cooper House on the corner of 4th and F, I have drawn it before, but I really liked how the shadows were falling on the white wood as the sun was setting. What was I listening to when I drew this? Probably something about football, or history. There is so much football these days. I remember this time last year when the football stopped, the floodlights went out, and football podcasts were suddenly free to be more creative, and not just go on about the latest VAR incident in Newcastle vs Crystal Palace or whatever. they would talk about old seasons, great teams from history, they would have fun football quizzes, and maybe talk a bit about the Belarus league which was still going on. When the German Bundesliga restarted, earlier than other leagues, we all became Bundesliga fans and far more interesting in the goings on at Schalke or the tactics of Julian Nagelsmann than ever before. Now it’s game after game after game after game. As for history, well I suppose there is just as much history as ever, but last year we would get more episodes about the Black Death, or the Plague of Justinian, or the 1918-19 Flu Pandemic (given the misnomer at the time ‘Spanish Flu’, as they were the only ones reporting on it since other European countries suppressed their news during World War I; in fact the flu outbreak apparently began in Kansas). Just what you want to hear. Speaking of which, who is looking forward to all of the films or TV dramas set during the pandemic? No, me neither. In fact I suspect there won’t be that many. Looking back to Shakespeare, there were disease outbreaks in his time, when people were quarantined, theatres closed – the plague outbreak of 1592-1594 for example, and another one between 1603-1604. Some of his plays like King Lear may have been written while on lockdown, though they didn’t have Zoom in those days so thankfully he never got his company of actors to sing “Imagine” line by line, or whatever was the equivalent back then, “Greensleeves” or something. Shakespeare may have made plague references that his audience would well have understood, but he didn’t come right out and make a Plague Play. Though if he did, perhaps it would have involved social distancing or self-isolation: The One Gentleman of Verona, for example. Richard ill. Julius Sneezer. Coriolonavirus. “The Comedy of Errors” speaks for itself with how certain governments handled things last year. Thinking about it, Romeo and Juliet’s balcony scene was pretty well socially distanced. Shakespeare was also a fan of masques of course. I did watch a number of the Globe Theatre’s productions on YouTube during the early months of the pandemic, they offered them up free (I did send donations). Back then, FIFA were also posting a lot of full-length classic football matches on YouTube as well, which I watched gleefully (that Argentina-England 86 game, well not as much of a close classic as I remember, England were dreadful and deserved to lose, even if Maradona scored with his hand). I also watched a lot of old Formula 1 races, while the motor races were also stopped. Sport is back, but theater not so much yet. Cinemas are starting to return, slowly, tentatively, and I can’t wait to get out to the movies again, as much as I love being sat on my couch. I also sketched a lot at home, drawing every room in the house, but now at least I’m back drawing outside and glad for it.