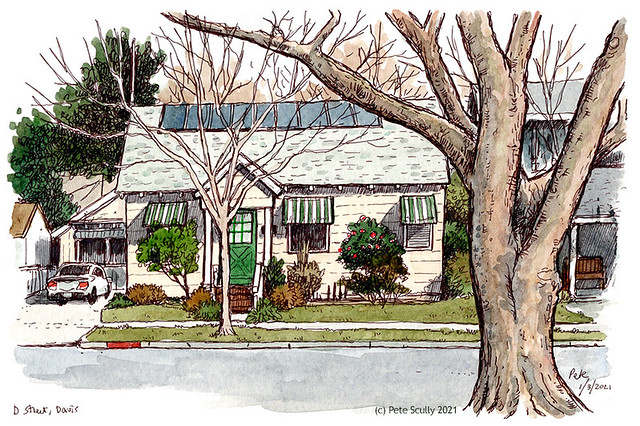 First outside sketch of 2021, which is just like 2020 but with a “1” instead of a “0”. Classic Pete format for a Davis sketch, straight-on look at a building across the street, tree on this side of the road as a foreground framing it, there you go guv, that’s what we do. “Hi, would you be able to draw a picture of my grandchild?” “Does he or she look like a house on the other side of the street with a tree in the foreground on this side of the street?” “Um, no.” “Sorry guv, no can do.” It’s a bit like a three chord song, or a Hollywood action movie, or a Christmas episode of Eastenders (minus the ‘shocking’ main character death), or Mourinho going a goal up and then defending until the other team scores an equalizer from a set piece in the 88th minute, it’s a formula I can hang on to when I am out sketching and am not sure what to draw, or don’t feel adventurous enough to draw from a slight angle up close. It’s comfort food, like baked pasta, or noodles on toast. I feel like I’ve drawn all of Davis hundreds of times but actually I’ve barely scratched the surface. There are so many houses and streets I would love to draw but admittedly self-consciousness of being a guy on a quiet street drawing outside houses gets in the way of all the places I would love to draw most. So I tend to choose my spot to draw more subtly, not standing right outside someone’s front yard to draw across the street, but here I stood in the public grounds of the Davis Community Church, the D Street side, downtown side of 5th, and drew the nice little place opposite. I love the look of this one with its colours, the touches of green, the little bit of red in the tree, it may not have been covered in Christmas decorations but it still made me feel festive. The buildings around this part of Davis are so historic, many going back to the very beginning of the city. I’ve considered doing a long panorama sketch of Fifth Street, like the one I did on campus a few years ago. I still might, though maybe not in an annoying accordion book, maybe just on different spreads of a Moleskine that I can stitch together digitally. As I drew this sketch, from a slightly elevated position away from the sidewalk (I was able to take my mask off; I find it hard drawing with my mask on as my glasses fog up more when I am looking down at my book, but right now sketching in a street where people will pass by you need the mask, and besides my masks have prints of my drawings on them) (by the way if you want a facemask with one of my drawings on it, go to: https://society6.com/petescully/masks, they come out really well and are very comfortable), I listened to a history podcast about bizarre books. And I kept thinking, surely it’s about time I put together this book of Davis sketches I’ve been threatening to do for years? So my new year’s resolution is to keep telling myself to start thinking about planning that. New year’s resolutions. “Don’t get stressed out by the news” was one, and to be fair, I thought that might last a bit longer than January 6th. What an exhausting bloody day that was/continues to be. “Exercise more” was another, and to be fair I have been back out running and doing long walks, but the gym is still closed. “Write more” is always one, I always get a lot out of writing even if it’s just nonsense like this on the blog. At least words are being placed next to each other in some sort of order. “Draw every day”, now I know you’re thinking I do that anyway, but this past year has seen a lot more gaps where I’ve chosen not to draw, because I’ve drawn everything in my house or not felt like it. But at least for as long as I can I will try to draw something every day. Preferably drawing life, but if I have to draw from photos or do another big virtual journey via street view than so be it. So that’s at least what I’m doing, trying to draw more. It’s harder while working from home, because on campus at least my lunchtime was the dedicated drawing time, while at home I tend not to leave the house for lunch. Oh the final one, “improve my foreign languages”, that is get better at the ones I know, read and learn more in them, and also maybe try to learn a new one. As a kid nothing excited me as much as discovering foreign languages, not even football or drawing. Well maybe they are all tied. I have plenty more not to discuss here, like family stuff and work stuff, learn new skills that sort of thing, plus a random resolution I have had to actually let my microwave food sit in the microwave for one minute after cooking (I’ve never done that, who does? Maybe I should start) but I like to think of resolutions as things you can start any time, not just when the year changes the little number on the end of it. Oh, and my last resolution is to edit my posts down more before I post them so they aren’t such long and unreadable clouds of words; obviously that one starts tomorrow.