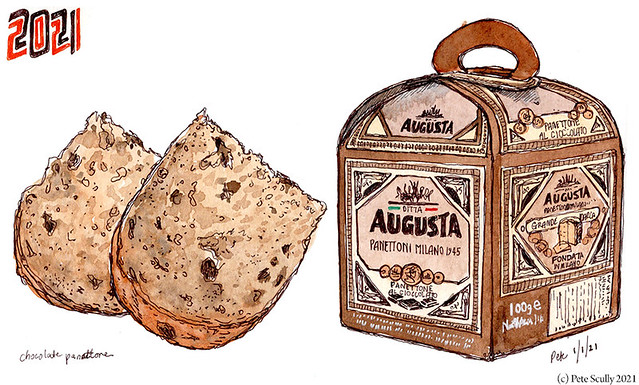 And so to 2021. I was really hesitant this year to send out wishes of “Happy New Year” as the clock struck 12. After the 2020 we all had, and let’s face it we are still having, a lot of people are still very much suffering through, the wish of “Happy New Year” seemed a bit hollow. I want people to be happy, but it might seem like I’m telling them they should be happy, and people have a right not to be if they can’t be or just don’t feel like it. I usually just don’t feel like it. So I nearly said, “Have a positive new year,” thinking, that sounds better. And then I realized actually that sounds a lot worse, given the current circumstances, the word positive has a negative meaning. “Hope 2021 is better than 2020” seemed alright, but like, this seems a bit tongue in cheek, even though it’s true. In the end I decided, I won’t send out Happy New Year messages, I’ll just pretend I forgot because of the time difference. To be honest, so some fireworks went off on telly, and I have to write a “1” at the end of the dates instead of a “0”, and maybe put up the new calendar (I got a Tottenham calendar for Christmas; Dele Alli is January, which probably means he is going to be sold). Years ago I used to like New Years, something about it meant you could talk to complete strangers, which in Britain is illegal for the rest of the year as you know. These days we just stay home doing our best to stay awake for midnight, which isn’t ever a problem every other day of the year. But either way, wishing everyone a Happy New Year this year probably is for the best, at least it’s a bit of non-negative cheer. The Christmas season for me doesn’t stop until January 6th, when the decorations come down and the last of the Christmas Calorie Food has to be eaten. This includes these lovely pannetoni that I picked up from the local Italian deli, Zia’s (one of my favourite Davis shops). This particular one, a small pannetone you can cut in two and share over a cup of tea, as I did while watching the Neil DeGrasse Tyson show Cosmos, has chocolate chips in it. It was pretty delicious. The little boxes they came in though were so pretty and I had to draw it, while watching Neil DeGrasse Tyson pretend to be on a spaceship orbiting Saturn and saying things like “Uranus is a giant gas cloud”. I keep accidentally calling him Neil DeGrassi Junior High Titan too, I blame the effect of the Christmas Calories. One of the best things I ate over the Christmas was also Italian, a huge “Tronco di Natale”, kind of a Christmas log covered in chocolate, but also nothing like what you’d expect from a Buche de Noel or a Yule Log. It was much lighter and tastier than expected, I need to get one next year. I did get some imported mince pies, huge and mostly crumbly pastry, but I also made some of my own with some ruby port mincemeat I picked up in England last time I was there. Nice but a bit rich, and spilled everywhere, I need a bit more practice cutting the pastry. I got a Dundee Cake too because really, why not, but haven’t eaten that yet. We decorated the usual cookies too, and got some homemade cookies from my mother-in-law, and lots of other chocolates here and there, all the Lindt balls and peppermint bark and Hershey kisses and chocolate macadamia nuts and Cadbury’s fingers and Turkish Delights and Milka bars, plus the little chocolate reindeer I traditionally hide all over the house to be found on Christmas morning, all the choccies and candies I put in my son’s advent calendar, not to mention all the cheeses I feel it’s necessary to have on hand. This might seem like a lot, but Cost Plus in Davis was closing down in December and lots of things were massively reduced, so I stocked up. Because of that, I didn’t end up getting the big pannetone from Zia’s like last year, but I got several of these smaller little ones instead, and that was a great choice. Now the post festive season weight loss plan kicks in, before Birthday Cake Season starts. Heavy New Year!