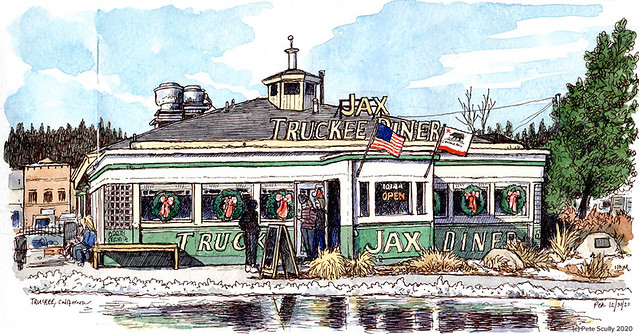 Last week, after not leaving the house for what felt like a lifetime, and taking a few days off work to eat and look at a screen, we got out of the house and drove up to the snow. It doesn’t snow in Davis, down here in the Sacramento Valley, but a couple of hours to the east of us is one of the snowiest parts of the contiguous US, in the Sierra Nevada mountains. The first time I ever went there I had never imagined snow like it, whole cars and the lower levels of houses swallowed up entirely, icicles like something from Hoth, and so cold my eyeballs were freezing over. It wasn’t like that this time, I don’t know they get quite that much snow up there any more, but there was still a good amount of snow, and lots of ice, though it wasn’t very cold. We went up to Truckee, walked around the town for a bit, got a pastry, ate our pre-packed sandwiches in the car. I really like Truckee and it’s been more than a decade since we stopped by there. I liked the look of this diner, Jax Truckee Diner, which of course wasn’t seating people inside right now but was allowing people to get take-out. Definitely somewhere I want to go to properly once all this Covid is behind us. I posted this on Instagram and my cousin said she had actually eaten there last year. I didn’t have time to draw it on site but I really wanted to draw it, so I took a photo and drew from that when I got home.

We had a nice time walking about in the snow. We went to a country park we’d never been to before close to Donner Lake (named after the Donner Party, the tragic historical incident which thankfully was given a name that many jokes can be made out of). It was like walking in a winter wonderland. When I say that, I don’t mean it was full of little stalls selling mulled wine and mass-produced hand-carved ornaments and expensive scarves, with Bing Crosby piping out of the speakers. Nor do I mean it was like walking in Woolie’s Winter Wonderland, which if you ever shopped at Woolworths in December you will know what I mean, back before Woolworths was finally laid to rest in 2008. I mean it was full of trees and snow, a perfect place to take photos. It was just nice being somewhere that looked different to Davis for a change. I don’t think I could live full time in a place which snowed regularly, but I don’t care, there is something magical about the world being blanketed in this white cold stuff. When it would snow overnight in London as a kid, which was way less often than you might think, looking out of the window and seeing the rooftops, the ground, the tops of cars, the branches of trees all gleaming white is still something I get excited about.

In the car, we listened to the Adam Buxton podcast, his interview with Paul McCartney. That was a good interview. At one point Paul talked about when he met with John Lennon in New York in the mid 70s and they discovered they were both really into baking bread. I imagined what if they had decided to get together again and form a baking partnership together. I imagined they had a bakery in the West Village called “Love Me Dough”. (They would probably have had to invite George and Ringo in if they wanted to call it “Il Fab Fornaio”). They would sell products with names like “Got To Get You Into My Loaf”, “All You Knead is Love”, “Baguette Back”, “Bake in the USSR”, “I’ll Be Bap”, “A Croissant The Universe”, “Here Comes the Bun”, “While My Guitar Gently Wheats”, “Ticket To Rye”, “I Should Have Known Butter”, “Please Mr Toastman”, “Being Fro the Benefit of Mister Cake”, “All My Muffin”, “Garlic Twist’n’Shout”, “You’ve Got To Hide Your Loaf Away” and “Yeasterday”, to name but a few, I will think of more over the next rest of my lifetime. Flour Power. Rock’n’ Roll. Actually I’m already done with this idea. That was a loooooong journey home.

2 thoughts on “snow day in truckee”