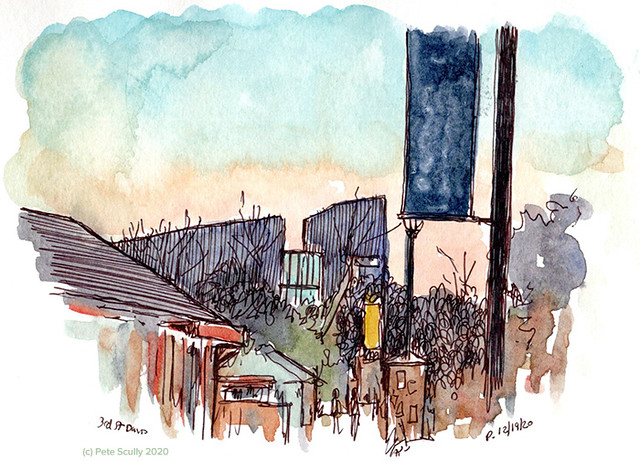 One from mid-December 2020. I didn’t sketch much in December, I found it a tricky month to get drawing. I mean, that’s not unusual. Looking at the chart I made from before, Decembers typically make up only about 3.7% of my annual drawing. Ok I will be honest, I made that statistic up, but it sounds about right. If I ever get the inclination I will actually do a statistical study of when my sketches were made and where, and with what pen or sketchbook, indoors or outdoors, in Davis or elsewhere, with or without colour, sketches per week, if there are trends with certain times of year or days of the week. And then I will use this data to create the perfect urban sketcher. Then I can predict what my year will look like to some degree of accuracy. You might be thinking, oh he is joking here, Pete says this stuff but isn’t really serious. To which I will say “exhibit (a), look at my previous post showing my chart of sketches from 2013-2020”, and “exhibit (b) I have spent almost a third of my life working for top-level statisticians. Not that I understand even one speck of dust of the sort of statistical work they do, I stopped doing maths at 16 with my GCSE (I got a grade C, which was the highest possible for the class I was in) (when I was at school, prior to the GCSE years I was in the top class for maths, but hated it, as I was taught by a certain Mr.Blindt, who was old school before there was old school, and his classes terrified me almost as much as the subject matter itself. So I asked to move down into the second-tier class, Miss Barker’s class, which was less stressful, but it meant I could feel alright about my grades (I even came top of the class in several tests), but it meant that the highest possible grade for my final GCSE exam was a C. I think it left out all the really hard stuff like sin/cos/tan and long division, and adding and subtracting and numbers and things. Grade C was a pass, and that was enough. I was more interested in art and languages.) (Incidentally, I actually only got grade A in two of my GCSE subjects, Art and German. In GCSE Art I got an “A” for every single piece of homework over the course of those two years, with one exception – the very first piece of homework assigned, for which I got a “D”. I didn’t mind, I didn’t expect a good grade for that joke. The homework assignment was “draw a part of your body” so I drew my eyebrow. I remember the boy passing back the homework assignments was a fairly mouthy kid who hadn’t been in any of my classes before, and he said loudly “hahaha, you got a D? You’re rubbish at drawin’!” That alone made it worth it.) (A-Level was a different story. I actually got a D overall for the whole thing. I was a bit more disappointed with that, but frankly my interest in the subject of art itself had waned so much, as had my interest in school life in general. I also got a D in A-Level German, a subject I had previously won annual school prizes for, while I ended up giving up A-Level History halfway through. I didn’t really get on with the History teachers, or at least two of the three we had anyway, the third was alright but looked a bit like Bob Geldof. One of the other history teachers seemed to despise me, because she would regularly turn me away from class for being even 30 seconds late, despite the fact nobody else had taken their jackets off; it didn’t help that I would go to my German class right afterwards complaining about her constantly, not knowing that my German teacher, a usually sympathetic guy, was actually married to that same history teacher – a rookie error on my part, to be sure. The other history teacher I had left teaching at the end of the first year to go and be a Welsh-language pop star (if memory serves, it was a band was called “Ian Rush”), but not before stating to the class that “certain people in this class will either fail or not finish this A-Level”, obviously meaning me; our class wasn’t very big, only about seven or eight students. I did enjoy his classes though, learning about the Italian risorgimento, reading Harry Hearder, studying Garibaldi and Mazzini and Cavour, doing the 1848 revolutions, German reunification, Bismarck; I really thought I was doing alright in his class at least, but evidently it wasn’t how the Ian Rush singer felt, and I remember feeling really disheartened by that at the time. My D in art though was honest, and I could have appealed it (if I recall my art teachers may have even suggested it, or maybe it was my head of year, I don’t remember), but I felt that I had really hit a low ebb in life by that point, and my school work was long gone; I hated being 18. I got a place in an art foundation course that didn’t require a very good grade to get into, but then I decided I was done with art and went off to college to do two more years of additional A-Levels, in English and French, with a retaking of German for my third one. Much more successful, and then I went off to university and did French and Drama.) (The decision to study Drama came out of absolutely nowhere, by the way)

Anyway I was talking about statistics. I think the reason this came up is not because I work with statisticians or because I need to chart my sketches, but because I came across a website this week of football (soccer) statistics called FBRef, and I can’t stop poring over the numbers. I love it, it has everything. Not just xG but xA as well. I never knew I needed to know Moussa Sissoko’s xA score before (“expected assists”) but 0.01 still seems low. Ok maybe I still need to get my head round those particular stats, but I like learning that over the past four years for example he has an 85.4% pass completion rate (3542 passes out of 4041 completed), 3317 of which were with his right foot, 382 with his left, 169 with the head, 96 from throw-ins, and 22 with “other body parts”. I could go on, I’m not obsessed with Moussa Sissoko or anything, but that’s just one example. So maybe I need to up my stats game when analyzing my sketches over the years. How long did each one take me? Was it morning, afternoon, evening? Temperature? Did I finish off at home or do all on-site? Waterbrush or paintbrush? I could get obsessive. (I do get obsessive for example with my running, I make charts detailing this stuff). But to be honest, this isn’t how I improve as a sketcher. This isn’t how I analyze what I’m doing that doesn’t feel right, what I could improve to make it how I actually want it. sometimes you just have to keep doing. Little by little you think, well ok this didn’t work last time, I’ll try that this time. It’s also not a trajectory. I’ve drawn myself into cul-de-sacs before, using one style so much that I realize after a while it’s not the style I really want, and try to pull back to an earlier way of drawing, but my fingers need exercising. Sometimes it is fun to just see what comes out, take the thinking out of it and jump in. Don’t worry about inspiration, just get the pen moving and the inspiration will come. Things such as value and perspective are important technical abilities to learn, but like when I’m coaching soccer I say that the game is the best teacher, with drawing I say that going and looking and doing is the best teacher. So the sketch above, it’s not technically a great drawing, it’s probably not the best sketch I could have done given the temperature, time of day, length of time I had been standing, but I liked it, it was quick. Whereas the one below, on 3rd Street, which was what I had originally set out to draw, I stopped because I wasn’t enjoying it. I felt rusty, it required a bit more thinking than I felt capable of at that moment (and I have drawn this building many times before), so I just turned myself around 180 degrees and drew the view toward campus. Maybe in that sketch I was ‘rubbish at drawin’ and that it was ok, not every sketch has to be an A. So that is the statistic that I can barely quantify, my state of mind, my mood, and my reason for sketching something. I like the sketch above because it represents me saying no to something I’m not enjoying and just jumping in somewhere else instead. And I will keep the one below because, unfinished or not, you can fill the rest in yourself using your imagination, so there’s no need to finish it, really. A bit like my History A-Level. I didn’t really fail at it, and I didn’t really need to finish it, because my imagination filled in the rest. Which is probably why I thought World War 2 was won by Captain America and Bucky, the French Revolution ended when Godzilla ate Napoleon, and Italian unification was achieved by Garibaldi, Rich Tea and a packet of Chocolate Digestives. Well you live and learn. 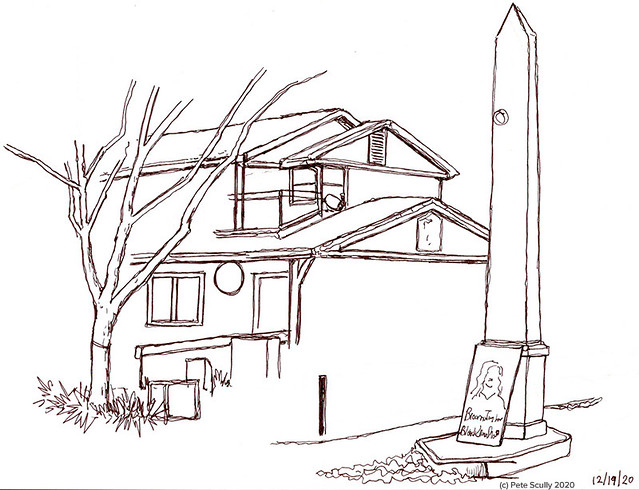