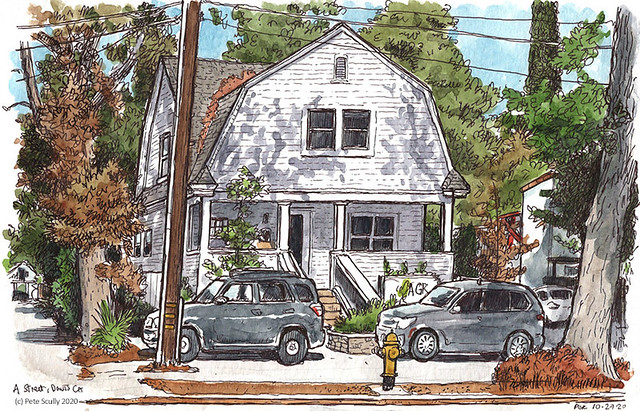 We’re nearly there, aren’t we! The longest week since that week in March that went on until June. I’ve not watched this much news since, I don’t know, 9/11, the death of Diana, JFK, Battle of Hastings, Vesuvius. IF I EVER go to Allegheny County or Maricopa County I will kiss the ground and hug the trees and sing like meeting an old friend. I actually do none of those things when I meet my actual old friends, that would be weird. But last night when I saw the update from Georgia I immediately had a vision of Lucas Moura celebrating after THAT goal in Amsterdam for Spurs vs Ajax. To be fair though the real heroes are the people on the news channels next to the big screens trying to calculate maths in their head, drawing numbers with digital pens onto red and blue maps of this county or that to tot up what the new score is, trying to beat the clock before the number actually calculates on the screen, like Carol Vorderman on Countdown figuring out the Numbers game when the two contestants have only managed to get two away, getting praise from the news anchors, all the while never letting a single second of broadcast go without a moment of audible speech. It’s like those productions of Shakespeare where they don’t want to cut out any text but want the audience to get at least half an hour in the pub afterwards so go at breakneck speed through the Merry Wives of Windsor… I’ve always said that Shakespeare and Scissors should be friends, and I love overly long and uncomfortable pauses in theatre. Which reminds me of my second favourite joke, A polar bear walks into a bar and says “I’d like a………pint of beer please,” the bartender replies “why the long paws?” There are various versions of that joke, sometimes it’s a grizzly bear, sometimes the pause is between the beer and the packet of crisps, sometimes he doesn’t drink beer at all but prefers lager so not to confuse the words bear and beer, but either way the long pause is funnier when longer. Once I told the joke and I actually went away and came back before finishing it. I actually left the country one time. Sometimes you have to do the right thing to get the joke right. And then if the other person doesn’t get it you have to say it again. My third favourite joke is similar, A polar bear (or a grizzly bear) walks into a bar and orders a beer (or a lager) and another for his lawyer who insists on the barman signing a contract to provide indemnity against any damage caused by the polar bear (or grizzly bear) as a result of drinking said beer (or lager). The bartender says “why the long clause”. Right that one probably isn’t my third favourite joke and I’m remembering it wrong, which is pretty impressive considering I only just thought of it, but after this week of endless election coverage I think all of our brains have melted. But we are nearly there folks, we are nearly there! We are nearly there. Nearly there.

I drew this as the second sketch in my new Moleskine and it’s a lunchtime drawing of a familiar building on 1st street. NOT on “A Street” as I have incorrectly written on the sketch. Fifteen years in Davis, drawing A Street loads of times and 1st Street quite a few times, and I make this rookie error. I’ll need to cross that out and write “1st” next to it. I have drawn this building at least three times before. It has a Dutch Colonial style, I think someone told me in a comment on one of the previous posts years ago, now I tell people like I’m an expert in reading American architectural styles or something. I just like the shapes, and the shadows on the walls.

I just remembered, it’s “why the big paws” not “why the long paws”, that’s why it didn’t seem as funny earlier. Oh well, next time I’ll get it right.