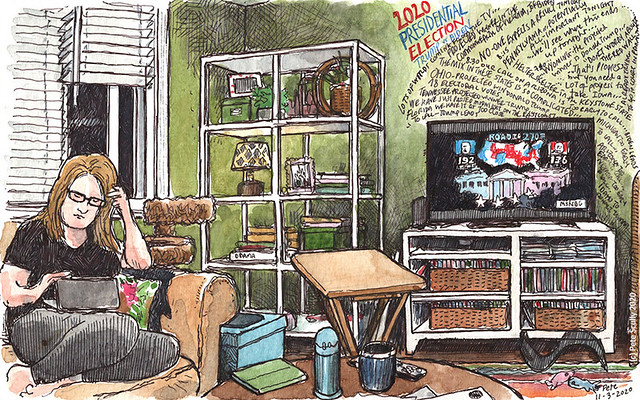 Election night 2020, it’s been a long year, it’s been a long night, I think it could be a long week. Been a long few years to be honest. The TV has words spewing out of it, the “Road to 270” is still very tight. It feels like watching a Spurs match where we’re holding on to a narrow lead but we keep giving away free kicks on the edge of the box. What a year this has been, and it ain’t over yet. Here’s another living room sketch, done in the new watercolour Moleskine (“sketchbook #38”). Fingers still crossed, but I’m not the optimist in the room.

The last page of this sketchbook, the last of the Seawhite of Brighton books I picked up in London last year, so on to a new book. This one was “Sketchbook 37” under the new numbering system I started last year. I need to actually put the numbers on the spines of the books and put them on a shelf sometime (right now I keep them in a box). This view is at the entrance to the UC Davis campus on 3rd Street, along A Street. The large interestingly shaped building is called the Death Star. Actually it isn’t called that officially but everyone calls it that. It’s the Social Sciences and Humanities Building. Imagine if the Galactic Empire called their Death Star something like that. The ‘Planetary Geological Redistribution Department’. On the right you can see a marquee set up, this is actually an outside classroom, set up to deal with the very few in-person classes during the pandemic. There are a few, but most classes are taught remotely. All of ours are, in our department. It was a windy day, we had some very high and dry winds that week, thankfully no fires were sparked in our area this time. I enjoyed drawing this one, I like how it turned out. I’ve drawn so many scenes in Davis but this is a slightly different angle and I like the noticeboard pillar to the left, those were installed when 3rd Street was completely revamped over the last couple of years. This drawing is another gateway, not just the end of a sketchbook, or the entrance to campus. While drawing this I got the phonecall that our house purchase was finally closed, so I started this drawing as a renter and ended it as a homeowner, which feels like a life milestone for me. I like the neighbourhood I live in up in north Davis, and am glad to stay there (plus I hate moving). So a chapter closes, a new chapter begins, and I’ll keep on drawing the same stuff, watching it slowly evolve as the years pass by. It’s important to remember that, on historic days like today, nothing really stays the same. (Actually some things do stay the same, nice sentiment though). For the record, I hope there is a big change today in the government. I’ve spent too long stressing about this election, but I’m not getting my hopes up. This has been a bloody stressful enough year as it is, time to open a new sketchbook. I’ve drawn this town for fifteen years, and I’ll keep on drawing Davis, and all its small changes.