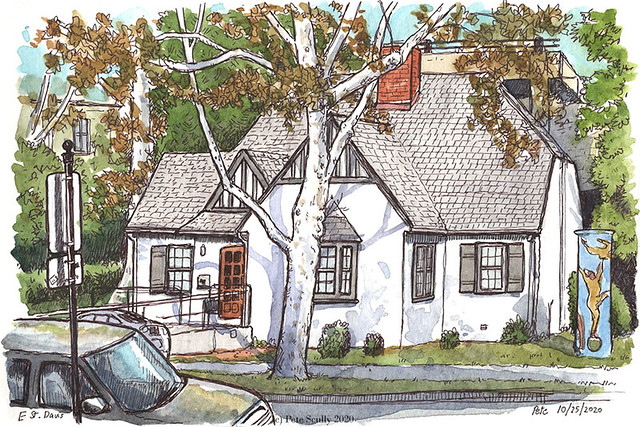 I started a new sketchbook. It’s a watercolour Moleskine, and I’ve used quite a few of those in the past, but looking at my list of sketchbooks it is actually the first one in almost five years. Five years? Wow. These were my go-to books, but then I started using more of the Seawhite of Brighton books (pretty cheap, picked up at Cass Arts in London) and the Stillman & Birn Alpha landscape books (really nice, I usually save those for when I’m making big trips to Europe). The watercolor Moley is thicker watercolour paper, less smooth, and slightly smaller, but I think I forgot just how much I love drawing in them. The first one I ever used was back in 2007, and  even though I had a couple of other ones before that here in the US that I used a lot, I call this one “Sketchbook #1“. That one in 2007 was the first landscape book and that has generally been my format since, so under my new numbering scheme, the latest one is “Sketchbook #38“, and my fifteenth watercolour Moleskine. I know, it feels like there should be more, but I do draw a lot. The last watercolour Moleskine (the fourteenth) was in fact “Sketchbook #19“. One reason I go through the Seawhites more quickly is that I usually don’t draw on both sides of the paper, as it’s a good bit thinner and I really lay on that paint (it’s not really meant for that), whereas in the Moley I’ll usually draw on both sides, no problem. Except that with the Micron Pigma pens I used to use all the time, the ink would rub off on the other side and make the other picture dirty, so I try to avoid that. I use the brown-black Uni-ball Signo UM-151 now and that does it a little less.

Ok, that is a lot of words. Sorry, I’ve been listening to the election coverage pretty much 24/7 over the past 48 hours. I know that makes no sense, 24/2 makes more sense, but there are so many words flying around, people on TV really like to talk a lot and leave absolutely no gaps while they go over all sorts of numbers and counties and ohmygodwillthiseverfinish… in a way I’m almost glad it’s taking a long time, it’s a little bit funny, like a really long Stewart Lee joke. You know the ones, you’ve seen them, the Stewart Lee jokes we have these days, they go on for ages and repeat themselves a lot, the Stewart Lee jokes, you’ve seen them, the Stewart Lee jokes. Etc and so on. It still feels like watching Jose’s Tottenham, but at least there the crowd noises are fake. It’s like that one Wimbledon final that one time which never wanted to end, but at least there nobody’s allowed to speak or they get shushed by the umpire. I wish a certain orange rage-tweeting rich prat would shush, no chance of that though, whatever happens. Let’s wrap this post up.

This sketch is of a building downtown on E Street that I have drawn before. This time I stood on the stairwell of a building opposite, socially distanced from any people going up the stairs. It was nice having a slightly elevated view, to see over the vehicles parked on this side of the road. It was a Sunday afternoon, and there were quite a few people out and about downtown.