In October 2010 I organized the first in a monthly series of sketchcrawls called “Let’s Draw Davis!”. We met in Central Park in the morning, drew all day, had lunch together, and met up again in the mid afternoon to look at each others’ sketchbooks. I had been on sketchcrawls in Davis before, advertised on the workdwide sketchcrawl forum, but after going to the Urban Sketching Symposium in Portland in the summer of 2010 (up to which point I had really not been getting ‘out there’ as an artist, except for being one of the original urban sketchers when that website launched) I scribbled thoughts and ideas into a notebook on the plane, one of which was that I needed to connect more with the local art community, meet other artists, encourage people to get out sketching, like Art Brut telling everyone to form a band. I wrote the words “Let’s Draw Davis” into my notebook and was struck with all sorts of ideas, the main one being that we needed a monthly gathering for people who wanted to draw, that would be free and organized with a start and end point, that would not be a ‘club’ or ‘group’ you had to join but an event anyone could feel part of, regardless of ability or experience. I had been on too many sketchcrawls where if you arrived late you wouldn’t know where the final meeting would be, or if you missed the middle point and they changed the final meeting you would be standing around wondering where everyone was (I’m looking at you, sketchcrawls in Berkeley years ago). It needed to be accessible, somewhere you could cycle to if need be, and IN DAVIS – this isn’t “Let’s Draw Davis And Sometimes Woodland Or Vacaville”, though they can definitely be things that should happen. I would put up posters in shop windows, make a website, put fliers in the local galleries, add things to social medias. I did all of that. I still make the posters, but someone else handles the Facebook group, and I’m not printing posters and putting them in Newsbeat like I used to. I am still making stickers, and recently I even tried to make badges. On that very first sketchcrawl I even made a few mini-sketchbooks, and brought extra pencils, so that if people asked what we were doing I could give them a book and a pencil and say, why not give it a go? I know of at least one person that actually worked for, and they went off and started drawing. The sketchcrawls haven’t always been monthly – been a few hiatus periods, such as this year with the pandemic, and also other years when I kinda stopped wanting to draw in groups (we all get like that; even now on sketchcrawls I still prefer wandering off on my own), but I have met so many great people, great artists, prolific sketchers that it’s been so totally worth it. It even kicked off a series of sketchcrawls when I organized a big sketchcrawl down the Fleet Street area in 2012 called “Let’s Draw London”, to celebrate the start of the new London Urban Sketchers chapter. They are still holding them monthly like clockwork there, big events with crowds of artists in all sorts of locations, called “Let’s Draw Trafalgar Square” or similar. I’ve had several other sketchcrawl ideas in California that haven’t been able to happen, such as my Sacramento Sketch Saturdays plan, or my big San Francisco Sketching and History Tour. But we still keep finding things to draw in Davis, even if it’s the same stuff in a different year.

So after a year of pandemic and shelter-in-place and wildfires and election stress, I was determined to celebrate ten years of Let’s Draw Davis with a sketchcrawl in the same place, a decade and a day later.

This was the poster, incorporating many of the posters I have designed (thrown together) over the years. Many fun ones; my favourite sketchcrawl might have been the 2017 City of Davis Centenary one, with the map of all the places that were there in 1917 and earlier (now go and draw them). So on this Saturday, we met at Central Park after most of the Farmers Market was packing up to go, and drew around the surprisingly busy park. It was a nice group of sketchers from around the region, a few new faces and several familiar friends. I drew the panorama at the top of this post. It was a hot day, with temperatures hitting 90 yet again, but pleasant. I stuck to the shade. I drew the compost heap area in the Central Park Gardens, an interesting little spot. 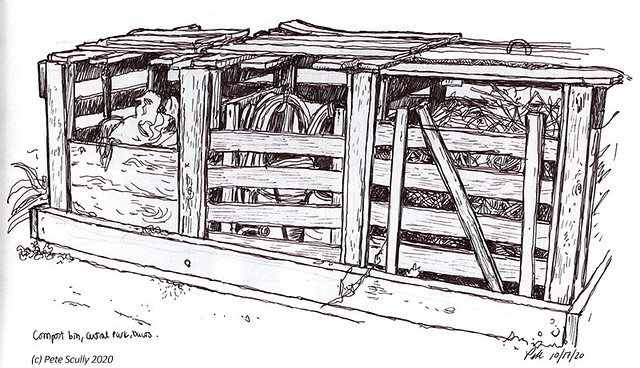 I was going to draw the Carousel, but it looked a bit too complicated, so I chickened out and drew the statue of Gandhi instead. then we all met up and shared our sketching stories. Being a special sketchcrawl I had some prizes at the end, for the ‘sketch of the day’ (William Lum got this), for the ‘most sketches’ (Misuk Goltz won this), and a long-time sketcher award for Marlene Lee who’s been coming on these since Jan 2011 and has come to almost every one since. (I did have a couple of long-time-sketcher prizes for a couple of others but they had left early, so next time!) 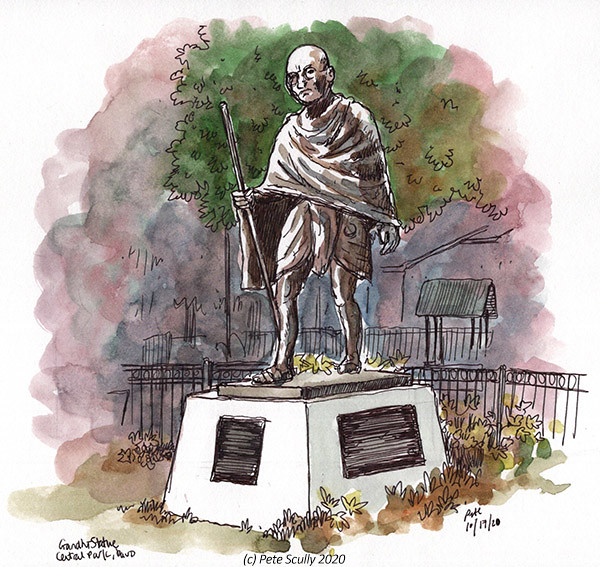 And that was that! The next Let’s Draw Davis sketchcrawl will be a scavenger hunt on Saturday November 14, I’ll update the Facebook page  soon. In the meantime, here’s to more drawing Davis!

One thought on “A Decade of Let’s Draw Davis!”