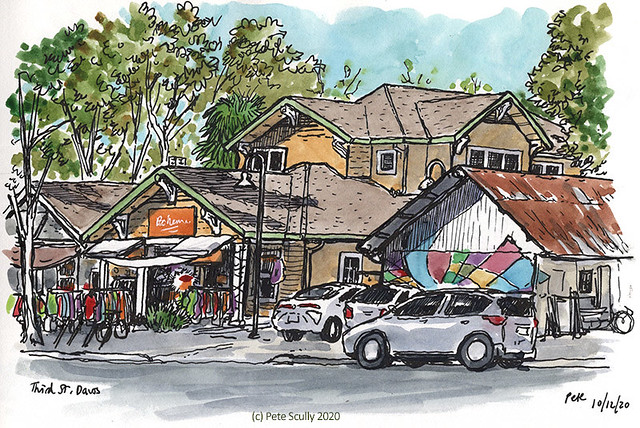 I’ve had this Lamy Safari fountain pen for about a year or more I think, I don’t use it very often. I wanted to draw with a fountain pen, but I might need an extra-fine nib to do what I’m used to with the Uni-ball Signo, but the other day I decided to brush it off and take it downtown for a quick late-lunch sketch. I had decided it was time for me to draw outside again more. this year I am so many sketches behind my usual haul, for fairly obvious reasons, even with sketching at home and virtual sketch-trips. Working from home I’m not getting myself out to draw during lunch like I do when I’m working on campus, like a routine. I’m eating at home rather than popping down to the Silo or downtown. The things I want to draw are further away as well, I haven’t really been inclined to draw my own neighbourhood much. There’s a lot of park scenery, trees and grass, it doesn’t leap out to me as much. It’s where I run. I haven’t run much this past couple of months due to the unbreathable air, although yesterday I did manage a couple of miles on the Green Belt. But on this one Monday I cycled down to 3rd St downtown and stood outside the little post office, to draw the buildings across the road. I have drawn these before of course but it’s a colourful scene. As I sketched, mask on and off to the side, people tried to get into the post office, but it was closed. I think it was for Columbus Day / Indigenous Peoples’ Day, that’s what I overheard anyway. People kept on coming up and trying to open the door, and then looking through the window, then leaving, wave after wave. I would be lying if I said it wasn’t a bit entertaining, I felt like I was watching a prank show. One couple pulled up in their car and dragged out five or six big parcels. I had to say something, but I don’t think they heard me through my mask, and by the time they were desperately pulling the handle with a pile of boxes around them it seemed a bit pointless telling them again it was closed. Another young guy looked forlornly through the window with his packet in his hand, and an older man in an SUV offered to take the young guy’s packet to the bigger post office for him, and the young guy agreed and handed over his item to the complete stranger. At this point I really did have to say something, and pointed out that if this one is closed for a holiday then the big one probably is too, so maybe you should call ahead first. They both made ‘oh, I guess you might be right’ faces, and the young guy got his packet back from the old guy, who said he would go there anyway and offered to drive the younger guy there, like there’s no global pandemic going on. I mean sure, kind samaritan and all, but maybe check if it’s open before driving a complete stranger out there in your SUV. Through my mask I made a ‘yeah, not a great idea guys’ face, and they shrugged and went on their separate ways. I presume. Maybe they went around the corner and met each other again and made “screw that red-headed sketcher bloke” faces and drove out to every post office in the county together high-fiving and singing Shania Twain songs to each other, that’s what I imagined anyway; it’s been a long year.

This is the corner of 3rd and B in Davis. B goes in one direction, 3rd goes in another. On the corner there on the right is “Pizzas and Pints” and I’ve not eaten a pizza or drunk a pint there. It’s pretty new, and I don’t eat downtown all that much these days obviously. Plus drinking pints of milk and eating pizza? It’s related I think to the place a block down the road, “Burgers and Brew”. Now I like a cup of tea with a burger as much as anyone. Actually I don’t eat burgers, as I don’t eat beef. I eat chicken burgers though, and those new Beyond Burgers are nice as well. More than that though I really love alliteration, which as an Anglo-Saxon poetry non-expert I can appreciate. I did write a little bit about the Alliterative Revival in my Master’s dissertation though. There might be more of these places, like “Fajitas and Flagons” or “Sausages and Sodas” or “Tacos and Teacups”, I don’t know, this is why I’m not a restaurateur. On the other side of the street is the US Bicycling Hall of Fame. The actual Hall of Fame. I wish they would have the names of famous cyclists on stars all around it like Hollywood, it wouldn’t have to take up too much room because you could remove them when they are disgraced. It’s easy to be disgraced these days. I’ve never actually been into the US Bicycling Hall of Fame, except to use the toilet. To think of the famous cyclists who have used those toilets! Wait, I’m not suggesting they did anything other than have a wee or a poo, blimey no. I do ride a bike though, and I recently got it serviced at the Bike Barn, a long overdue tune-up. Wasn’t cheap but they replaced a bunch of parts. I did ask them specifically to fix the kickstand, but for some reason they couldn’t do that so they instead loosened it and made it worse, not it can barely stand up by itself, it’s like me on my stag night. My stag night, that was a long time ago, and some great memories, if only I could remember them myself. I still lived in London then, we went out around Chalk Farm. Those were the days my friend, you never get those back. Now, beyond that building is Central Park, no not that one, this is the one in Davis. It’s significantly smaller with significantly fewer appearances in Law and Order. That’s where we held the tenth anniversary Let’s Draw Davis sketchcrawl last Saturday. The first one was there in October 2010, ten years later we held another one there and I’ll post the sketches from that soon. Time flies…