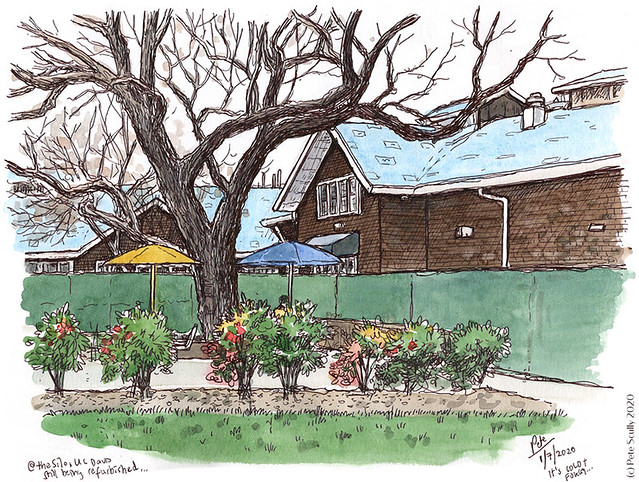 Let’s go back in time again to January. January was when we were nearly at war with Iran, and Australia was burning, and Trump was in the middle of his impeachment, and we thought wow, the 2020 season is starting strong, lots of big news, maybe the rest of the year will be quiet. Well here we are. When I thought ‘quiet’ I didn’t mean ‘stuck at home for months, no travel, no sports, school from home, working from the bedroom, uncertainty and unhappiness, paranoia and panic, anxiety and antagonism’ but here we are. Oh well. Above is a sketch I did of the Silo at UC Davis, scene of a million sketches of mine, place of having lunch. They were redoing the roof, it’s all done now I think. It was freezing cold that day; a few days before I had been swimming in the middle of the Pacific on Maui, so chilly Davis was a comedown. Fast forward to June, Davis is 100 degrees Fahrenheit now and I’m stuck in my bedroom. 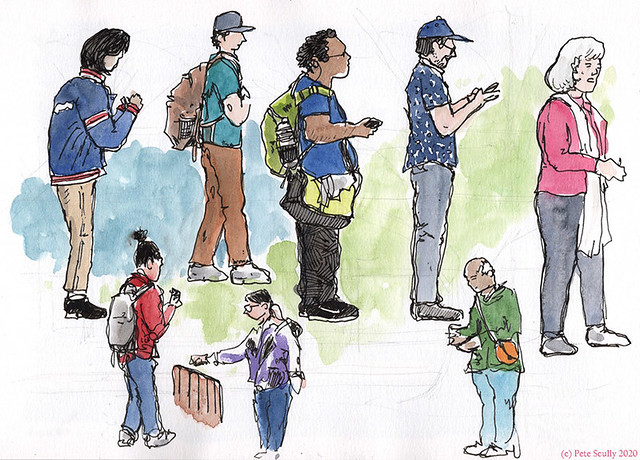 Here are some people, sketching around the Silo in January, along with the following obligatory comment about “ooh they aren’t social distancing, we didn’t even know what that was back then, oh how the world has changed” etc: Ooh, they aren’t social distancing. We didn’t even know what that was back then! Oh how the world has changed. But this is not a drawing of a crowd, each of these people was drawn individually at different moments. I could have drawn them standing on each others’ heads but they weren’t. So don’t worry about it, it’s not a photo of Bournemouth beach or anything. That said, yes it was back in January, and while none of these people have them on, a lot of our students and faculty from China were already wearing masks, having experienced outbreaks of contagious disease before. Fast-forward to now, I like wearing my mask, personally. I can’t use it while exercising, which for me is running, but I wear it when I’m outside even walking the neighbourhood. I rarely go into shops but I wear it there. I did have to run some soccer tryout events this past week, following strict protocols on social distancing, and I had to wear it at almost all times in my capacity as a coach (I took it off to run during the warm-up – it was 100 degrees out! – and to drink my water, but kept it on while attempting to give loud but muffled instructions). The mask means I can do funny voices more, like Bane or Doctor Doom or Brian Clough. (Can you imagine Brian Clough as Doctor Doom? “Oh that FOOL Revie, oh he may have beaten Galactus but it doesn’t count because he did it by CHEATING. If superhero battles were meant to be fought in space God would have put New York city streets in the sky. Now I wouldn’t say I was the best scientific mind/super-villain/supreme god-emperor in the Marvel Universe, but I’d say I was in the Top 1.” Brian Von Doom. They both liked wearing green. I can’t imagine Cloughie wearing a mask though, but I bet Don Revie wished he did. 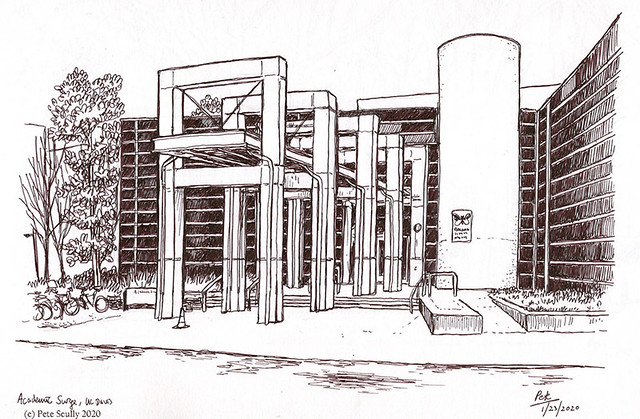 I drew this, the Academic Surge building next to the one where I work, during a lunchtime in later January. They really like large rectangular arches. There was a sale on at the large rectangular arch shop, and it was buy one get one free at the dark window store, so with the money they saved there they got the biggest massive cylinder they could find at Massive Cylinders R Us. 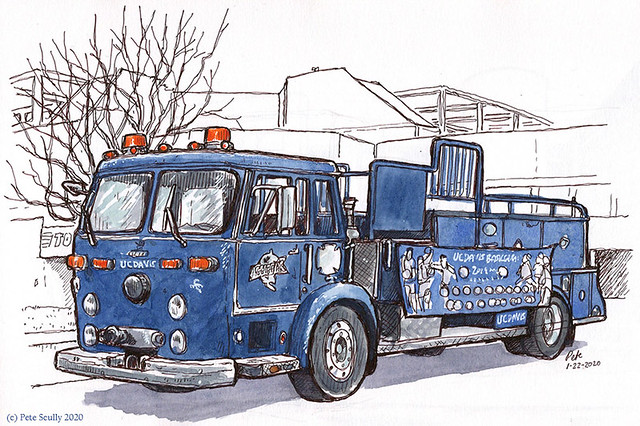 The day before I went to the gym (remember the gym?) which at UC Davis is the ARC, where I would go regularly while exercising and losing weight. Now the only only exercise I am doing is running – I set myself goals in terms of miles per month that I have been hitting, although now I have to run early in the morning or not at all, to beat this damn heat – and eating doughnuts. Technically that last thing isn’t exercising but there’s a global pandemic on, what you gonna do. But I would love to get back to the routine of going to the gym, going on that elliptical thing (where I watch Netflix Formula One shows or that amazing Dark Crystal series), doing the rowing machine, squashing all my stuff into a small locker. This is the blue Aggie fire truck. It’s not an in-use fire truck any more, but belongs to the UCD Athletics dept. I have drawn it before. They sue it in the big parades and to promote sports at UC Davis. Kids love fire trucks. My son went through the whole fire truck phase, it’s when I started drawing them loads. He loved visiting the fire station, meeting the firefighters who were always happy to meet the local kids, they even had special ‘baseball cards’ with each of the firefighters on which kids could collect. They were fun days, when you could make their day by just walking past the fire station and seeing the doors open so you could see the ladder truck and all the others. Those really were the days. I’ve a lot of respect for firefighters, especially in the past few years where fires have been such a terrible thing in California (and elsewhere), but I do really like to draw a firetruck. 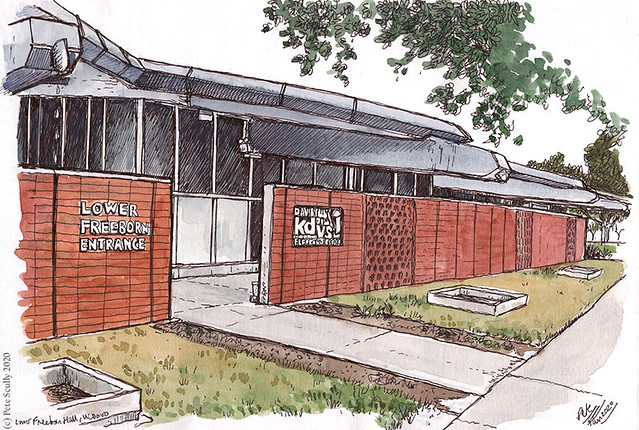 Moving around campus, it was a very rainy day when I stood under a tree and tried to draw this end of Freeborn Hall, home of the legendary local radio station KDVS. I have known several people involved with KDVS over the years, it is a proper institution, and I’ve always wanted to go and sketch their record room, where they keep all their huge supplies of music, it looks amazing. However I must confess, I don’t listen to the radio. I haven’t listened to the radio in years. When I was a kid I would listen to the radio a lot, in fact when I was 10 I wanted to be a radio DJ. In 1986, a radio DJ was approximately the number 1 job in the country, right up there with The Queen or Gary Lineker. I liked Capitol Radio, and used to listen to Steve Wright, and I would record songs from the radio and then with my twin cassette player. You remember those! One of the tape decks would be just play only, the other one had play and record (hold them down together), and don’t forget to put the little tab out of the cassette so you can’t tape over it later. Come to think of it, I only had a single tape player, my mum had the double player, I used to borrow it all the time to copy-record tapes.  Remember having to do that, to record a tape or make a playlist you’d be playing the whole thing, listening as you go along, a much more organic way than nowadays with your digital playlists. Look how much we have gained, but what have we lost?! Anyway I would record myself talking like I was on the radio, no idea what I would have said back then. I probably put on that radio voice too, the one where all “t” sounds become “d” sounds, my mum would listen to Capital Gold. Remember Capital Gold? This is one for Londoners. It played all the old songs from the 60s, which to me then as a kid in the 80s seemed like a million years ago. Tony Blackburn was on it, and David Hamilton. One of my favourite radio-themed things though was a board game I had, Mike Read’s Pop Quiz. It may be one of the most 1980s things you ever see. I also wanted to be a football commentator. It’s funny because I really don’t like listening to recordings of myself speak. Fast forward to 2020 (and we all remember how slow fast forward was on those old cassette players) and we have Zoom and so on, and I had to record a presentation where I gave a virtual sketch tour of Davis for new students, and I really say “um” and “er” a lot, even when I’m scripted. I have considered making YouTube videos about my Davis sketches, a tour of the town and a little sketch demo, but I can’t listen to myself talk right now. Maybe I need to do more funny voices. So, no radio DJ career for me, but that’s ok, I haven’t turned on a radio in years. I do listen to a lot of podcasts though. 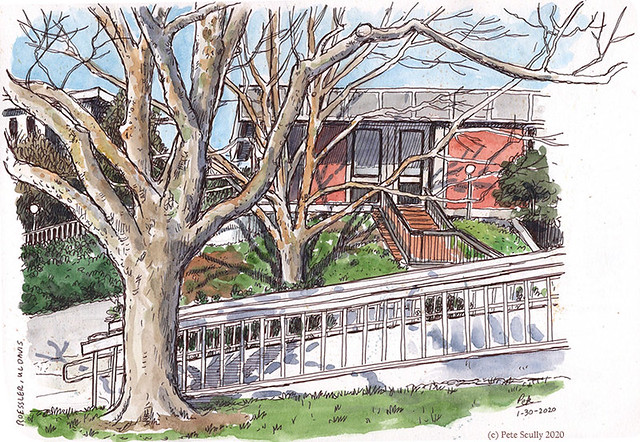 Ok nearly done with January campus sketches now, this is Roessler Hall, as drawn from next to the Physics building. Always reminds me of the brilliant East German striker Uwe Roessler, who used to play for Man City back when they were heroic and rubbish, but had amazing Umbro and Kappa kits. I think that 97-99 Man City kit is one of the greatest kits of all time. They also had this player from Georgia back when foreign players were still a bit new, and Georgia was a new exotic independent country: Georgi Kinkladze. He was on the City team at the same time as Roessler, and they were exciting to watch, but ultimately terrible, getting relegated in 1996. Roessler and Kinkladze stuck around as they failed to get promoted, but eventually City came back up to the Premier League a few years after they both left, in the year 2000 (this is like talking about the 60s to a kid in the 80s, I feel like Tony Blackburn) (Wait till you hear about Blackburn Rovers!), but then went straight back down again, because City were really bad, like way worse even than Spurs were at the time. Now they have tons of oil cash and Pep Guardiola and Noel Gallagher has a secret portal to their dressing room, but I quite liked them when they were heroically shite. 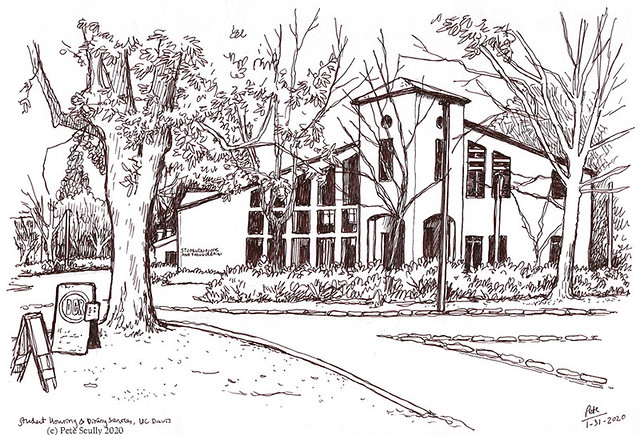 And finally, a quick sketch of the Student Housing building. I drew a lot in January. Right I’m off to play Mike Read’s Pop Quiz, with my mask on.

One thought on “january on campus”