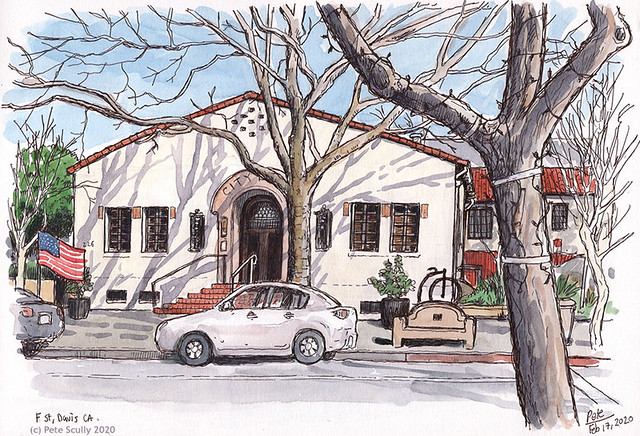 Social distancing. Masks. Second wave. Spike. Testing. Contact tracing. We’re entering that odd phase where things are reopening, kind of, but we aren’t all in the same sort of ready yet. I know I’m not particularly ready for the world yet, but I don’t know if I ever was. This next few months will be hard. Still staying in, working full-time from my bedroom, yet occasionally having to be around groups of people for various things (such as youth soccer tryouts), everyone having different levels of social comfort, and different expectations, it’s a bit uncomfortable. But I will get back out with a sketchbook. I’ve already started, but working from home I’m less inclined than when I work at the office, because I can spend lunchtime on the couch watching the restarted fake-crowd-noise Premier League. I’m teaching my son French too, which is fun, as my French is very rusty. I suppose absolute beginners French I can still just about handle, although I told him to learn the French numbers rather than the Belgian ones, even though the Belgian numbering system makes more sense and is easier to remember. Come on, ‘nonante-neuf’ is easier to explain than ‘quatre-vingt-dix-neuf’. This will be a summer without travel to places where we can practice it though, so no real-life ordering pains-au-chocolat for breakfast at the boulangerie. I thought about using Tricolore to teach him, you remember Tricolore, the textbook we all used at school, where we learned our way around La Rochelle. In the end I went with another simple book, and I’m also creating a bunch of handwritten exercises on my iPad using cartoons of cats that I am drawing. A cat called “Ronron”. I think I’m enjoying it the most, but then I loved learning new languages as a kid, this whole idea that other words and ways of thinking existed beyond just the ones I experienced. German is still my favourite foreign language that I learned, and I’m getting back into learning Italian, which I did a GCSE evening course in while we still lived in London. Enough about language. I’m still watching Shakespeare at the Globe on YouTube, the Midsummer Night’s Dream production was funny, as was the Merry Wives of Windsor, one bloke in both was Pearce Quigley, he was very funny and his comedic northerner style of performance worked great in that intimate Globe setting.
But back to Davis. I suppose I should post here my pre-Covid sketches, of which there are plenty. I may be totally slowed down on the sketching front now, and officially months behind the same point last year, but I started fairly furiously. However I will just post one here now – the Old City Hall, Davis, also known currently as the City Hall Tavern. Well I say currently – it was announced recently that this bar, along with the longer standing restaurant Bistro 33 on the other side of the building, will not be reopening. I’m sure the coronavirus is partly to blame, but the building did get new owners recently and the lease for the restaurant and bar was expiring anyway. Still it is always a shame to see local businesses close. I have drawn the building many times, and I’ve drawn inside the bar a few times too, although it’s been years since I ate at the restaurant (I liked their creme brulee). I wonder what it will be next. Knowing Davis, a frozen yogurt shop. Or another bar and restaurant. I do know that it used to be a police station, and a fire station, and this part was used as a gallery space when I first came here. Oh and of course it was the old city hall.