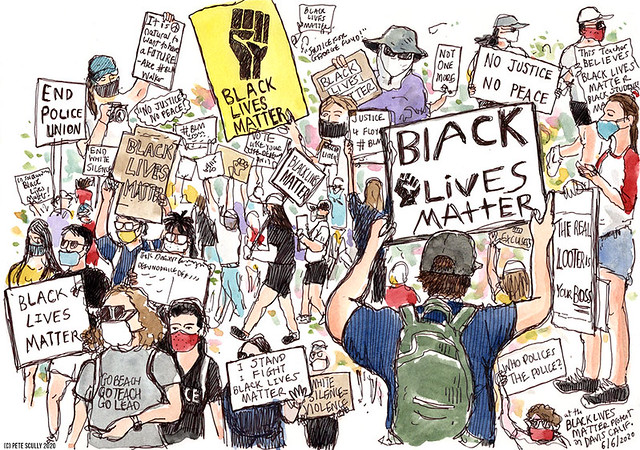 Yesterday I went downtown for the first time in three months, joining the Black Lives Matter march from Community Park. There was a sizable crowd that seemed to increase by every block, all wearing face masks (I social-distanced as much as possible – this was the most people I have been around since the shelter-in-place began), with many hand-drawn signs in support of justice for black people recently killed by police officers, particularly George Floyd and Breonna Taylor. Cars and buses honked in support as they went past. We marched down F Street, and I tried to sketch as I went, but that was actually very difficult, all I managed were some scribbled figures, so I added in a lot more details and signs later on from the pictures I took. We circled round to Central Park, before circling about the downtown streets. The crowd then went on to march outside the Davis police station, though I ended up staying downtown (I stopped into the Soccer and Lifestyle shop, now open to the public again, to see how they are doing – the shelter-in-place has been very hard on small businesses). I’m so glad I went along on the march, it was very heartening to see so many – young, old and those of us in the middle – out expressing their voices in support of our black friends and neighbours. Yesterday afternoon, the Davis police chief announced a change in their use of force policy, a very positive step. This past couple of weeks have been a big moment in this country and the constant shock news has been often very difficult to process. It’s been emotional for everyone, feelings of anger and sorrow, on top of everything else this year is throwing at us. Marching even for that short while, just being around people again, and hearing so many voices speak out in solidarity with the black community, was the right thing to do. 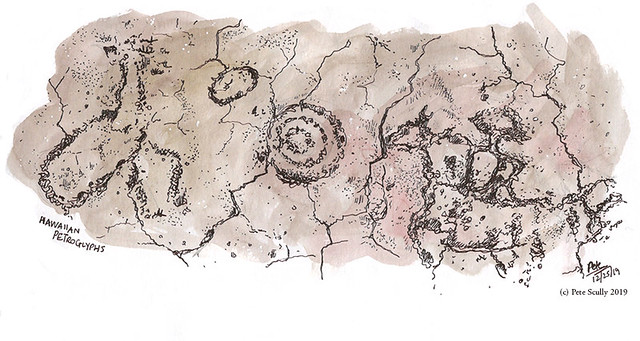 Mele Kalikimaka! It’s Christmas Day in Hawaii. We got up and did all the Christmas stuff, and then went to meet up with some others for a bit of lunch and some Christmas day drinks, followed by an afternoon in the ocean. It was cloudier, even a bit rainy, but in a Hawaii way, not a British way. Swimming in a warm ocean is definitely not something you do in England on Christmas day, nor even in California. Hawaii’s pretty nice. I didn’t bring my sketchbook into the ocean. I did do a little bit of sketching at the ancient Hawaiian petroglyph preserve at Waikoloa, a sacred rocky ground filled with carved patterns on the stone. 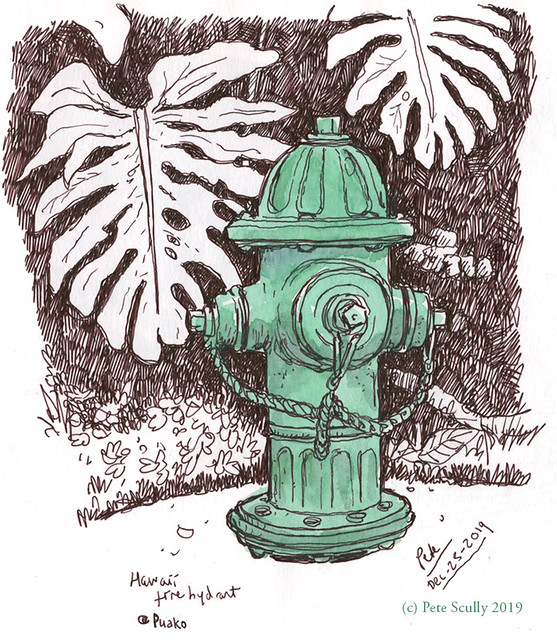 I also drew this green fire hydrant nearby to our rented house, it’s lovely isn’t it.

On Boxing Day (which is not what Americans call it but I’m British) we took a drive down the side of the Big Island, going to Puʻuhonua o Hōnaunau national historical park (https://www.nps.gov/puho/index.htm), which was fairly spectacular. It is an ancient Hawaiian place of refuge, where those broke a law (or ‘kapu’) could flee to evade punishment. Some beautiful old Hawaiian kii protector statues and tikis, as well as demonstrations of traditional Hawaiian building and craftwork.

Here are a few photos from the preserve. The rocky black lava fields that meet the sea were home to so much wildlife, especially the big honu, the beautiful sea turtles that are so symbolic of Hawaii.

Afterwards we spent a rainy day along the Kona coast, visiting a coffee plantation, stopping off in a little town called Kealakekua, having lunch at Annie’s Burgers & Beer (the beer was delicious, the vegan ‘taro burger’ I had was much less my cup of tea), looking at ukuleles in a little music shop, and trying chocolate covered ‘donkey balls’. Not real donkey balls of course, they’re actually nuts. Not those sort of nuts. Check them out here: https://donkeyballstore.com/

We finished off the day with a beer at Kona Brewing in Kailua-Kona. It was pretty crowded there, and looking back in this time of social distancing, it seems like a long time until we are in such close quarters and having pints and pizzas again. I like the Big Island. The last thing I drew there on our trip was this hibiscus flower, one of many blooming around our house. Mele Blooming Kalikimaka! 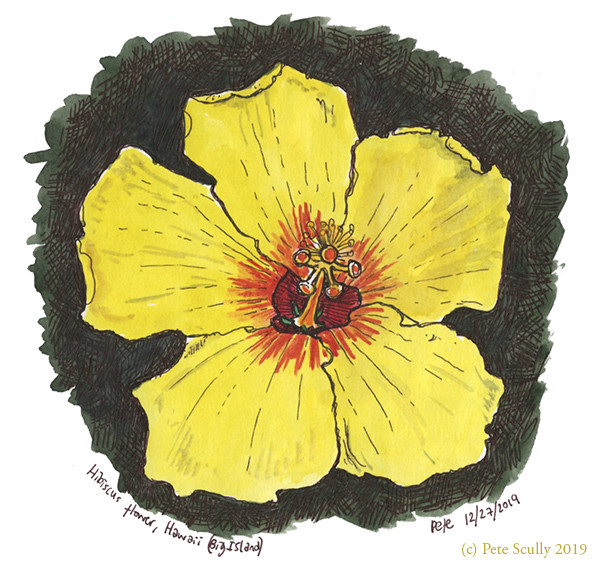