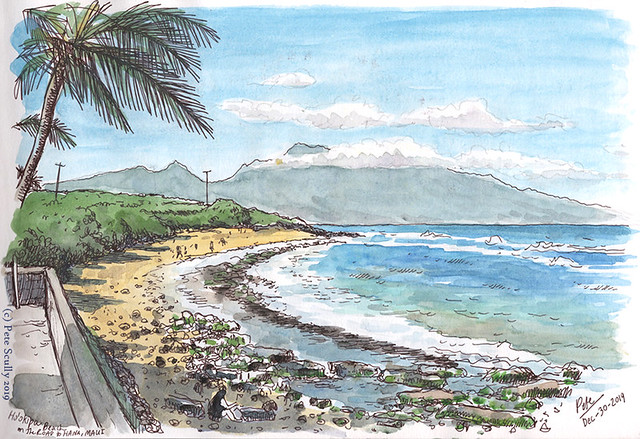 After Christmas on Hawaii, we flew one island to the  west to spend New Years on Maui. What a beautiful place! It’s pretty spectacular. I still can’t believe that 2020, the most rubbish of years, started for us on this tropical paradise. It’s like we used up all our good year points in one go just by being here a few days. Well it was worth it. We stayed at a beautiful resort – the Grand Wailea – enjoying the pool and the beach and the amazing scenery. On the second-to-last day of 2019 we drove over to the east side of Maui, along the Road To Hana. The Road To Hana is a famous winding road alongside spectacular coastline and tropical jungle. Near the start of The Road we stopped at the beautiful Ho’okipa Beach to watch enormous waves. I mean, look at that view. It’s one of the most jaw-dropping places I’ve ever been. I love watching all the surfers, though even these waves were pretty wild and not for the faint hearted. There were a few sea turtles lounging on the beach, this is a well-known spot where the honu hang out.

We returned there on there way back, and saw many more, majestic creatures. I also drew this coastguard’s hut, typical of those along the ocean fronts here. 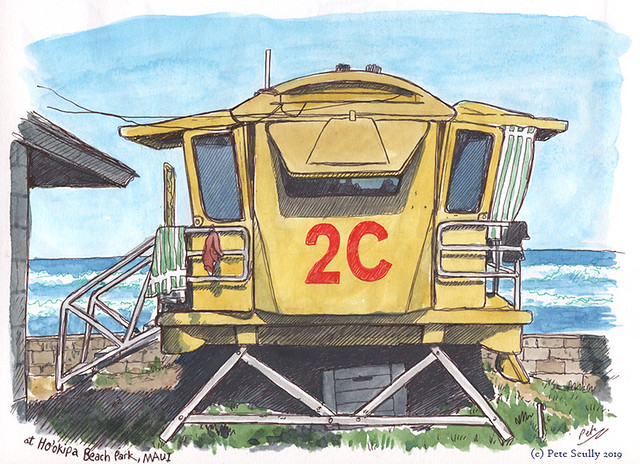 So the Road to Hana was full of twists and turns, like a twisty turny thing, and we actually only made it about halfway before it was time to turn back. This being December it would get dark before we could return if we went all the way to Hana itself, so we’ll save that for a future visit. However we made a couple of other really fun stops along the way. Firstly we stopped at Twin Falls, hiking a little way to see some interesting looking waterfalls along a river. I loved the sound of the bamboo trees knocking together in the breeze. We had fruit smoothies and coconut at the farm shack afterwards.

But I think our favourite stop of all was at a lush tropical arboretum called the Garden of Eden. We spent a good while walking about its paths, enjoying all the colourful flowers and tall bamboos, its sudden vistas of waterfalls or drops into the ocean, its huge banyan trees with knotted roots. The park was designed in 1991 by arborist Alan Bradbury and really feels like a beloved family-run place. Well worth the visit, every second of it. https://mauigardenofeden.com/ 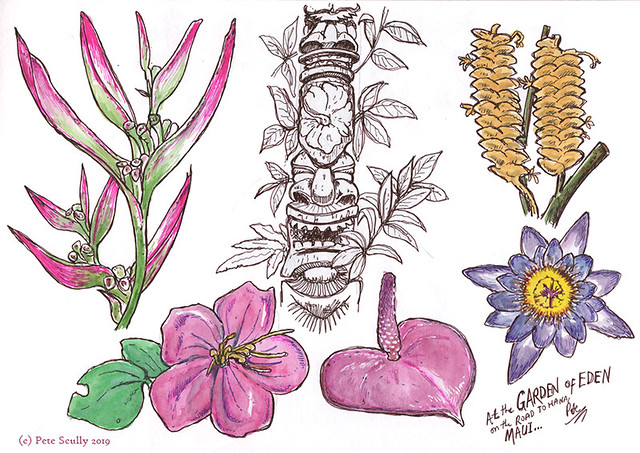 And this view right here was seen in Jurassic Park (the first one, still one of my favourite films), when they first arrive by helicopter.

We did have some food before leaving though. Right next door was the smell of some tasty barbecue, so we stopped and had what I can only describe as proper Hawaiian comfort food. Dudes, this was a platter of meats (chicken for me, my wife had the pork) and veg served on leaves on a massive chunk of bamboo, with barbecued banana topped with whipped cream to finish. That banana was heaven, it really was.

And finally, on the way back we stopped in the small beach town of Paia, for some delicious shave ice at Tobi’s Shave Ice. I tell you, this was the best shave ice I had in Maui. Everyone talks about Ululani’s, but I much prefer Tobi’s.

I’ll put the rest of my Maui sketches and pictures of food in a different post I think, because this one particular day was Maui enough. Needless to say, we went to a luau, we saw a lot of golden sunsets, played in a lot of waves, had a lot more shave ice, and more than enough cocktails to make up for the fun that would be 2020. Yep, Maui’s very nice.