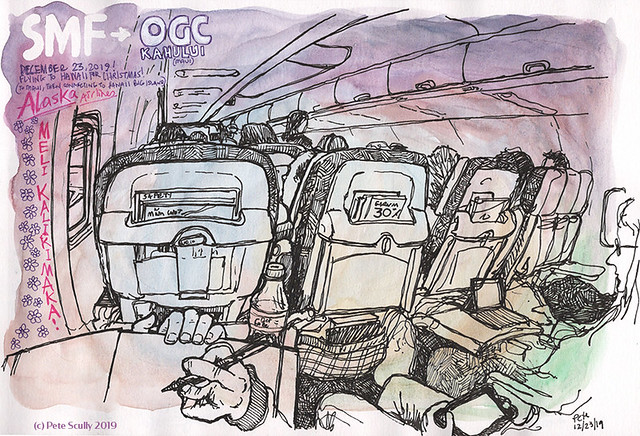 2020 has been a big pile of farts wrapped inside a cake of poo mixed into a giant bowl of wee. And just when you think it can’t hold any more beer, every day just keeps asking it to hold its beer. Why will no day this year hold its own beer? Is it too much to ask to maybe just put your beer on a table or maybe don’t do the thing you were going to do that requires you to not hold a beer? Go home 2020, you are drunk. But you’ll have to walk because there are no cabs, and you better be in before the curfew starts.

2019 ended so well, at least for me. We spent the final days of the year in Hawai’i, in a tropical paradise sipping cocktails in the pool and playing the ukulele in the ocean. It seems like an extravagant piece of fantasy fiction now; if you try to visit Hawai’i these days you have to quarantine for two weeks, and your hotel gives you a one-time-only key that lets you into your room but not back again if you deign to leave it. Cheers 2020 you utter *!#*%!. Happily I did start the year with my feet in the ocean. It was only ever going downhill from there.

So, finally I’ll post some of the sketches I did while there. I didn’t do too many, as I was pretty busy sipping cocktails and playing the ukulele in the ocean, but of course I draw whenever I can so here are a few. Above, sketched on the flight to Kahului in Maui, where we would change before flying to Kona on the west side of Hawai’i, the Big Island. We were spending Christmas there – you can see I have spelled “Mele Kalikimaka” wrong – that’s Hawaiian for Merry Christmas – with my wife’s family also flying in from California, and from there we were going to spend New Year’s back in Maui, just the three of us. Hawai’i is pretty great, but I might occasionally leave the apostrophe behind and just say Hawaii if that’s ok. 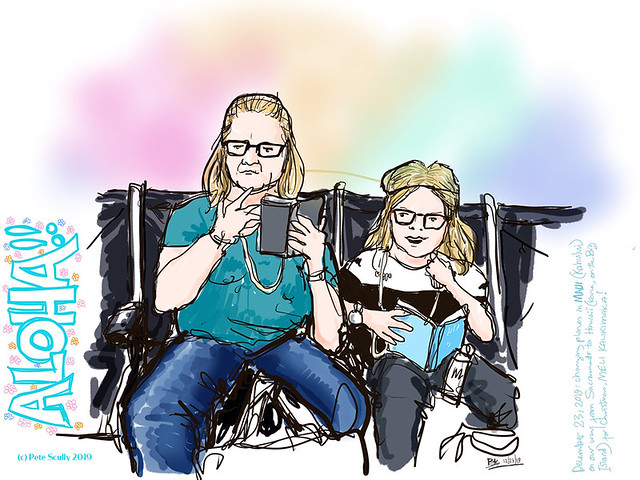 An attempt at drawing digitally, which I was still getting the hang of, waiting to change planes at Maui airport. We took so many flights last year, going all over the place, that it’s probably for the best that in 2020 we’ll be taking so few. I’m not a fan of airports, at least they are small in Hawaii and have lots of those lovely chocolate covered macadamia nuts to eat, expensive though they are. 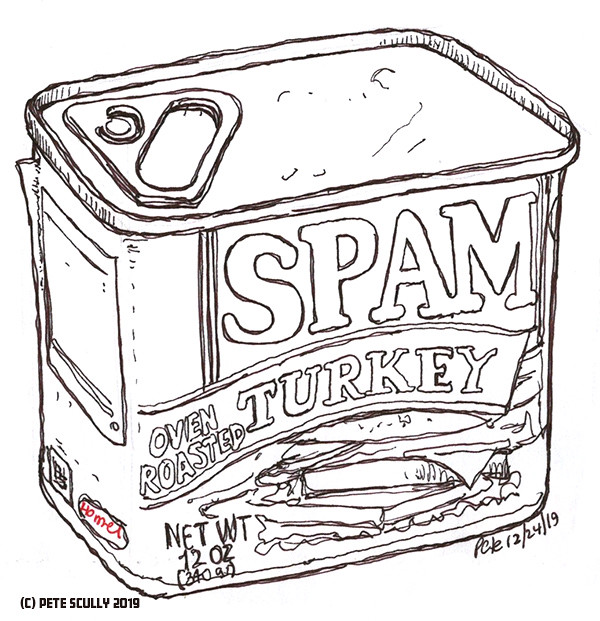 I’ll tell you what else they have a lot of in Hawaii – Spam. They love it there! Loads of different varieties in the stores. Also, custard pies, proper big custard pies, like the ones clowns or the phantom from Tiswas would throw. (Actually I’m not sure the phantom had actual custard in his pies, come to think of it he threw flans of foam, which I always remembered as custard pies) (Why is this a thing? Well in the supermarket I was texting back and forth with my big sister about having found actual custard pies and we were talking about that). Anyway Spam. I don’t actually eat most of it (not being a pork/beef/that sort of meat eater) but they did have some delicious turkey spam so I cooked that up for breakfast. 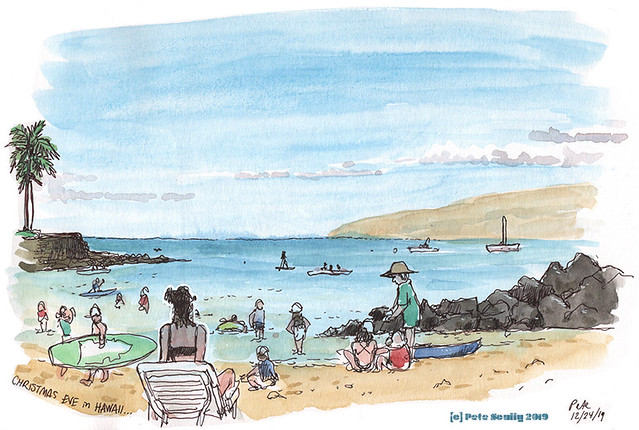 Christmas Eve sat on a tropical beach is pretty alright though, huh. I’ll say that is quite a nice way to do it. With delicious shave ice and cocktails at the little beach club at Mauna Lani, this was perfect. The ocean was warm, the waves not very strong, and my brother-in-law went snorkeling further out (I didn’t, but maybe next time I’ll give the snorkeling a go). I loved just spending time in the water. My sketch does no justice at all to the scene, but it’s fun to unwind on the sand as well. 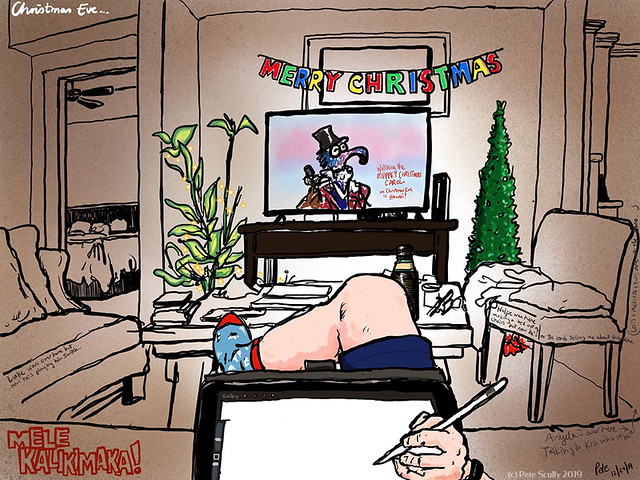 But the Christmas traditions are important in our family, and one of the most important is sitting watching Muppet’s Christmas Carol on DVD on Christmas Eve. The best Christmas film. Michael Caine’s best film. The best version of this story (and I love the Albert Finney version). I drew it on the iPad with a nice cold beer. We also watch Blackadder’s Christmas Carol every year as well, another tradition, and The Snowman, but admittedly we’re not paying as much attention to The Snowman by that point. I also like watching It’s A Wonderful Life, but since 2020 feels like the Pottersville timeline it’s a bit on the nose. We were staying in a house near Waikoloa, with great views of lava tubes, about a 10-15 minute walk to the beach. Not a bad place! The Big Island is very different from the previous island we had visited, Oahu. At least, our side of it was. It’s much bigger, and much rockier, being part of an active volcano. The lava field landscapes were incredible, immense plains of sharp lava rock stretching down to the ocean from the enormous peaks. And you drive what feels like a short way and suddenly it feels like the jungle, everything is green and wet. We went on a kayak trip down the old flumes of the sugar plantation in Kohala, that was very interesting, something I will remember for years. We didn’t explore the Hilo side of the island this time, nor did we have time to go up to the volcano (plus it rained), but I want to go back on a future trip.

But maybe not in 2020. I’ll post some more of my Hawai’i sketches in the next posts.