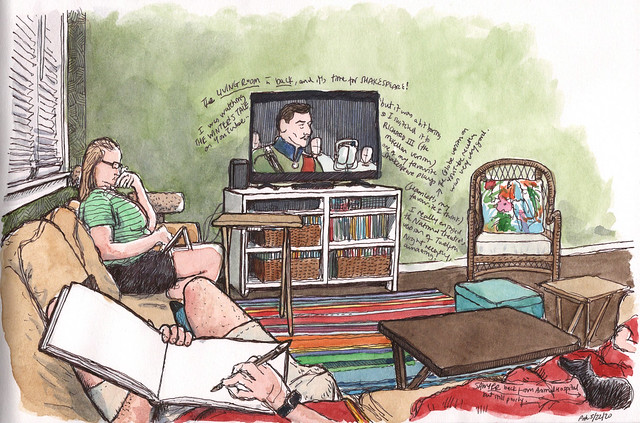 Well after the flood thing we finally got a new floor and repaired walls and a return of the living room. Good opportunity to move a few things around. I’ve since put shelves back next to the telly and the coffee table back in the middle, I’m going to get a new dining table and have a think about the desk situation. Meanwhile cat furniture is being moved about, our poor cats just want the living space back. Our cat Sawyer was sick again, and had just come back that day from another stint in the hospital, needing lots of rest and recuperation. I celebrated getting both the couch and the cat back by watching some Shakespeare online – I’ve been enjoying the Globe Theatre’s productions aired on YouTube, so I thought I’d watch The Winter’s Tale. Unfortunately I wasn’t really into it, and my family thought it was a bit boring, so in my Winter’s Tale discontent I switched on one of my favourite bits of Shakespeare, the Ian McKellen version of Richard III from the mid 90s. Brilliant from start to finish, and I’d forgotten how many names were in that film. A younger Robert Downey Junior playing himself as Rivers, an about-the-same-age-as-ever Jim Broadbent playing himself as Buckingham, and an ageless Maggie Smith playing herself as the Duchess of York. So many more big names. Been years since I saw it. I did take part in a production of Richard III in my first year at university, not acting, I was on the art side of things, I helped with the props and drew maps and took part in making a huge floor for the stage, covered in newspaper clippings. I then helped with the stage management and getting actors’ costumes ready, just doing what I was told. The stage manager was a third year student who was a little bossy – I suppose you had to be – but she really liked yelling at us first years helping out (there was one moment where she did say “you’ll be like this when you’re my age”, though I pointed out I was older than her). She was alright though and the whole production was really well done and a fun experience, though I’ll never forget trying to pull a large wooden table I borrowed from the Territorial Army along with other props all the way down Deansbrook Road, and then I never used it (was I expecting to bring a table with me on the tube across London to Mile End?) I can’t recall the art director’s name now but she was really nice and I loved helping with all of that stuff. I did quite a few other productions at university during my time there but that was the biggest and most properly done. Unlike the version of Caucasian Chalk Circle by Brecht which I co-directed. A very fun experience, all acting in German, but this time it was my turn to be the bossy one. I was at first just playing Azdak the Judge, maybe the best role ever written, and perfect for me. In the first half of the play (before Azdak appears) I decided not to act in other roles but did all of the artwork instead. Since we had very little budget for a set, I took an overhead projector, some sheets of acetate and five coloured pens, and drew out entire sets to be projected behind the actors. I also drew a few people to be extras, moving around alongside the actors, and operated the projector from the front row. It was very Brechtian, I suppose. And then some people would always miss rehearsal, or show up way too late, and so when the director asked me to be co-director I just replaced their small roles with cartoon people projected on stage. It was a chaotic and highly silly play but immense fun and time well spent with some great people. It’s been a really long time since I did anything like stage work, and I’ve often toyed with the idea of getting into it again. but I think not. It takes me forever to set up a stage for a Lego animation, let alone anything bigger. Still, I do have ideas for some Lego animated Shakespeare (that isn’t three hours long) that I would like to do some day, but right now, I’m just enjoying having a new floor, never mind a stage.

My page is my stage. I like to think about the act of urban sketching in relation to performance, both the physical act of being out as part of the urban environment and also the creation of art on the page too. Years ago I would hide away, under the cloak of invisibility, until the first Symposium gave me the confidence to be part of the scene itself, and not worry if people came and looked at what I was doing, but to embrace it. The act of seeing other people out sketching can be a catalyst to go sketching yourself – someone else is doing it, I should not be afraid to do it too. There’s a whole road of ideas I’ve been thinking about on this subject, the crossover between performance/theatre and urban sketching, particularly the relation between community sketching events such as sketchcrawls and interactive theatre. The act of several sketchers positioned around a scene such as a few stalls at the Farmers Market turned those stalls into something else, a performance to be viewed, it doesn’t have to be a scripted performance but we are watching it, and recording it, telling its story through sketches. There’s a lot to unpack and I might get around to writing it all down some day; it was a topic I was going to explore in a talk at the Hong Kong Symposium this year, before that was cancelled, but I’m still developing the ideas. In the meantime, as the local shelter-in-place order starts to draw to a close, I’ll finish drawing around the house and finally get back to sketching outside.