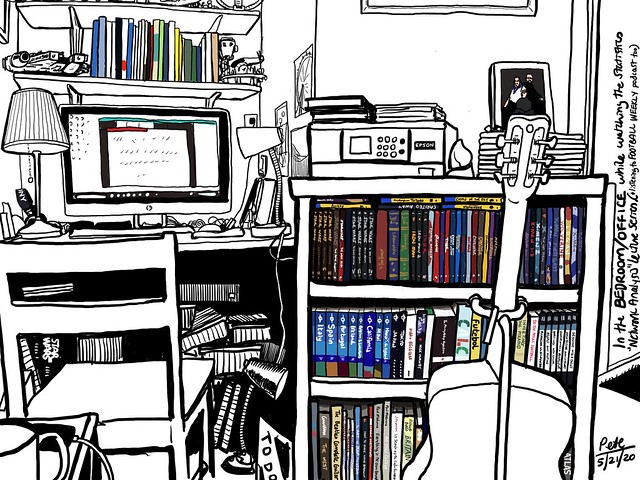 A couple more on the iPad drawn in the bedroom, or the Bedroom Office as it now is. Both drawn before we got our living room back (which was over the weekend, hooray!) so this was also the dining room and watching tv room. It’s also where I draw and write (haha, I hardly ever write at the moment), and it would be where I do my Lego animations but I’ve not done those in a while either. I felt like installing a running track around the bed and using it as a gym too. With all stuff from downstairs shelves all over the floor it would have been more like a hurdle track. Ah well, it’s where we are right now. I notice from some of my fellow sketchers in Europe that things are slowly beginning to open up there, and I think that they will here too soon, but extremely cautiously. Well most of us, some aren’t. I also can’t wait for the shelter-in-place to be over, because then the walking and running paths around here might not be so busy, people might stay in more. I don’t know, I want to go places, get on a train and wander about the City, but I don’t know how we’ll all feel. I have a nice mask. Lately I’ve been obsessed with the idea of going on week-long hikes along the national trails of England, as if that should ever happen. I used to think about that sort of thing when I was young but never got around to it, except my time in Cumbria when I was 17 doing the Outward Bound thing. In the meantime, stay at home, it’s very hot outside again in California. These two sketches were done on the iPad, sat on the bed, the one below while watching Revenge of the Sith (I do love ‘Sith’, one of my favourite films), the one above while monitoring an online seminar/workshop for our department. The bookshelf was moved from downstairs during the flood but I am going to keep it there as I like having books close by my bed. I have already moved the dvd shelf downstairs and replaced it with my old collection of Fighting Fantasy books. And right now, I’m watching the Bundesliga, as football has returned to Germany, albeit in empty stadiums. Unlike the quiet first round of games, the Dortmund-Bayern game has crowd noise pumped in, and the tv cameras are angled to show as little of the empty stands as possible. I’ve watched so many old World Cup games lately it is nice to watch some actual real new games. I feel like a teenager again, when I would rarely leave my room, just stay in there drawing and watching football or Star Wars or reading. Still on top of the recent flood which left us without a living room for a month, one of the cats got sick and was in hospital a couple of times, he’s recovering now the poor thing, but he did wee all over my side of the bed one night. Go home 2020 you are drunk! One thing all of this disruption and time at home has given me is time to go through things and organize stuff, get rid of what I don’t need, and one day I might get started on that. 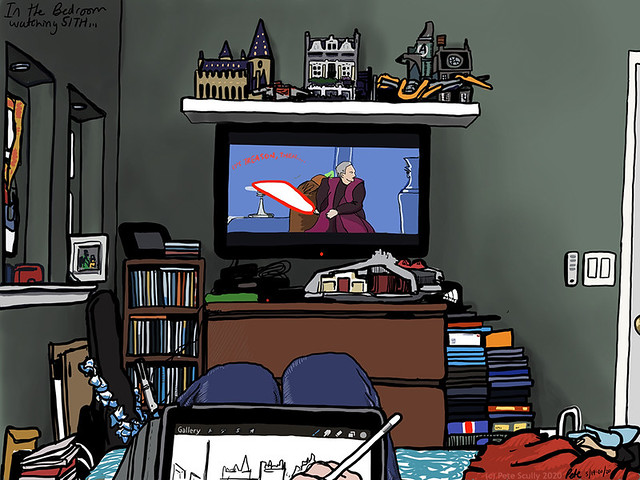 In the meantime I’ll draw round the house. Tomorrow our local sketching thing Let’s Draw Davis will have a virtual get-together, less of a sketchcrawl and more just the show and tell bit, showing what we have drawn while stuck at home during this whole thing. I had an idea over the weekend that I might put a video together of my stay-home sketches, and the I thought I could do a series of YouTube videos giving a tour of Davis through my sketches, focusing on a different area or theme each time, make about 8-10 of them. Summer project.

One thought on “the bedroom days”