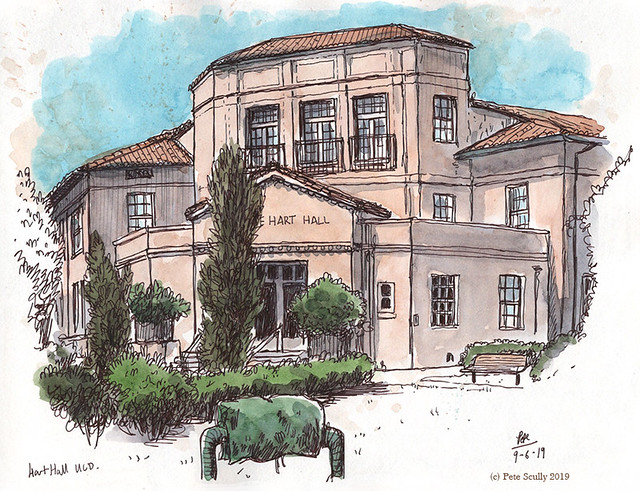 And so it is April. I pity the Fools. No seriously this year is not the year for that, read the room folks, read the planet-sized room. Well I’m still at home and sat at the desk, so let’s plod through the rest of 2019’s many many sketches. It was my most sketchingest year yet. 2020 is pretty sketchful as well, though I’ve barely started scanning. I have decided that I bunch the rest of the 2019 sketches together thematically, such as those on campus, those from downtown, those from sketchcrawls, those from trips I took (Portland, London, Hawaii), iPad sketches (I only started iPad sketching in the autumn, I’ve posted some already). So to get us going,  here are the sketches I did on the UC Davis campus (or just around it) in the second half of last year. These encompass a lot of lunchtime sketches, in the usual places I have sketched before. Above is Hart Hall, which is not (as I have pointed out to you before) names after Tony Hart. Not everything is named after Tony Hart! Hartbeat was, but Heartbeat (with “Every Loser Wins” singer Nick Berry) is not. Take Hart was named after him, but Hart To Hart (with Bobby Wagner and Steffi Powers) was not. Similarly the body parts called the “toe”, the “knee” and the “heart” were not named after him, nor was he named after them. Same goes for RC Willey. Ok so now that completely necessary explanation is out of the way, this is one of my favourite buildings on campus to sketch, but it does I admit always make me think of Tony Hart. I wonder what he did with all those pictures that kids would submit to The Gallery? It’s why I never sent anything in to him. I used to imagine that maybe he ate them in some sort of ritual to steal their essence, though I can’t connect that theory to why Mr Bennett kept getting his foot stuck in a bucket. Look I used to watch that show a lot when I was a kid alright. 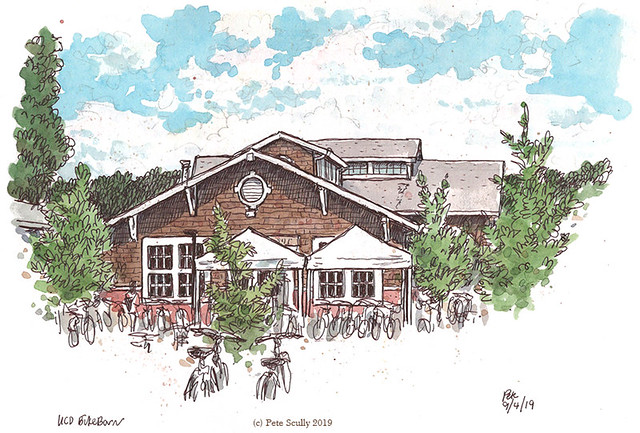 The UC Davis Bike Barn, drawn many times by my hand. Oh by the way the Bike Barn is NOT named after that other British TV show for teens, Byker Grove. It’s not even spelled the same. However if you should look it up on YouTubem you;ll get the Byker Grove theme tune stuck in your head, and every time you walk past the Bike Barn you will start singing it to yourself. I do anyway. Don’t tell anyone. 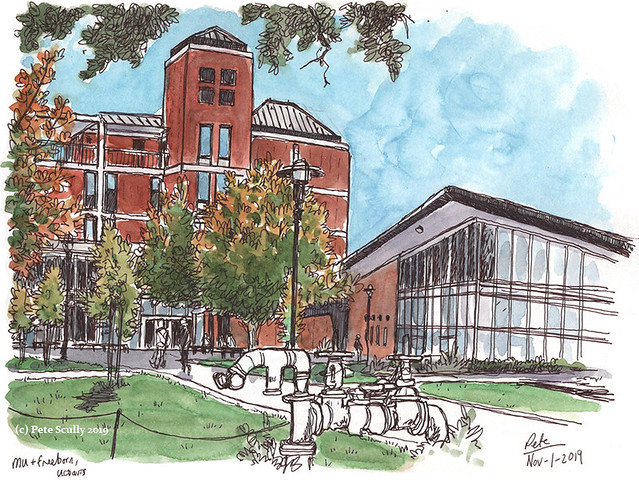 Here is Freeborn Hall (on the right), which is actually scheduled to be torn down at some point, if they ever get round to it. It’s pretty historic. Bob Marley played there. I was saw one of my favourite bands Art Brut play there, but this was not a good venue. That’s ART Brut, not HART Brut. Though they might be named after Tony ‘Art, I’ll have to check. They are nor named after Brut after shave, nor are they named after British kids TV show Art Attack, hosted by youthful Mersey matey Neil Buchanan. Neily B was the younger brighter more “1990” Tony Hart, though Neily was really really small (like Morph) and would present his shows among normal sized paintbrushes and felt-tip-pens which looked gigantic. It was probably just a trick of perspective thinking back on it. Anyway this is Freeborn Hall and it’s scheduled for destruction. I mean demolition. 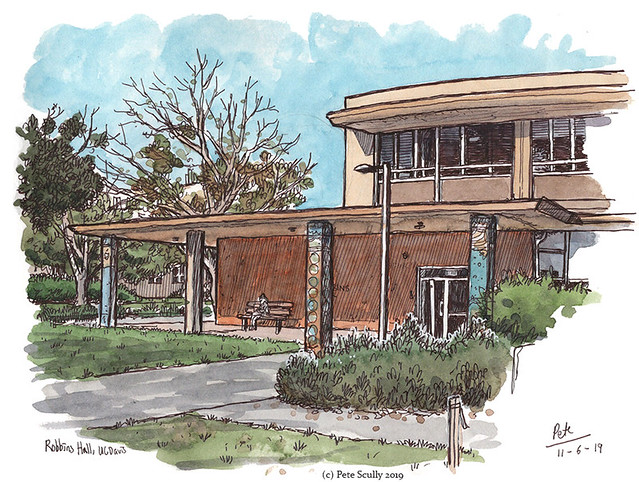 This is Robbins Hall, not far from Hart Hall, just on the other side. It is not named after Robin Hood, though I can see why you might have thought that. Speaking of Robin Hood do you remember that old British kids TV show from the early 90s “Maid Marian And Her Merry Men”? That was a fun show, it had Cat from Red Dwarf in it, and Baldrick from Black Adder as the Sheriff of Nottingham, several other people. Maid Marian was the brassy main character while the Robin Hood character was some wimpy yuppie. Elmo from Brush Strokes was in it too. It was much beloved. I liked all that sort of Robin Hood stuff back then, especially the more silly stuff with music. I even liked the really silly Kevin Costner version with Alan Rickman playing Baldrick’s character from Maid Marian, even though it came packaged with that Adam Bryans song that was number 1 for fifteen years, “Everything I Do (But I Won’t Do That)”. I liked that stuff so much that for a school drama project I wrote and performed a short four-song musical called, imaginatively, “Robin Hood” (I didn’t believe in silly humourous subtitles, I wanted it to be taken seriously ok), with the highlight song being called “Don’t Fuck With Me I’m Robin Hood” (which was actually based on a dream my friend Terry had, although later he told me that he had made that up). Anyway, Robbins Hall is the sketch above. 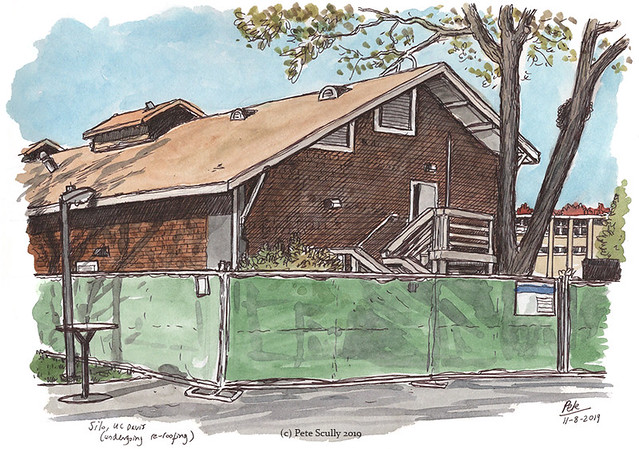 Ok above is the Silo which has been under a lot of refurbishment for a very long time now. Outside they usually have a truck for Peet’s Coffee. Peet’s is a chain of coffee shops here in the US, and I made them change their name to Peet’s because Pete doesn’t drink coffee, he drinks Tea. Speaking of Tea, did you ever watch that show T-Bag? It was another British kids TV show from the late 80s or so. All of these references are like 30 years old. That particular show was a bit mental, I never really liked it much. There was one kid called T-Shirt, he used to creep me out a bit, a bit too “TV kid”. The witch was funny. I liked the shows with witches in it. Grotbags (from Rod, Hull and Emu); Rentaghost, they had a witch in it I think; erm, Wizbit, Paul Daniels is in that and he did magic; yep, all the witches, I liked witches. Anyway folks, this is the Silo. Sometimes I come here for a sand-witch. 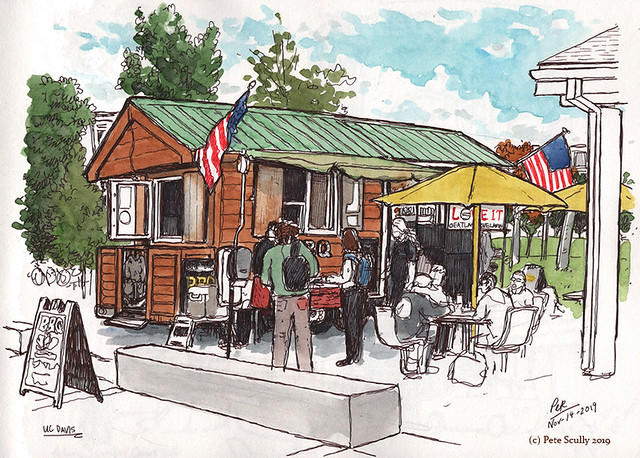 This is also at the Silo, one of many food trucks that park here. This is one of the food trucks they decided was a good idea to park right in the way making it conveniently harder for people top walk past. It does BBQ which stands for Beef, Bacon and Queues. I don’t eat meat like that so I don’t know if it’s any good by it does smell nice so I sketched it and breathed in the meaty aroma. Hey speaking of food, do you remember the old British TV cartoon called the Poddington Peas? It’s another one that had an incredible catchy theme tune. “Down at the Bottom of the Garden, with all the Birds and the Beas, a Little Lotta Little People, they’re called the Poddington Peas…” You remember that surely. I must admit I didn’t really watch it, I just liked the theme tune. The great thing about living in the 21st century now though is that rather than simply remembering all these theme tunes to impress people with later (and I know Americans who have never heard of any of these things are genuinely impressed, or at least an impression was genuinely made), you can just YouTube them to find them. I didn’t watch shows like ‘Raggy Dolls’ or ‘Rosie and Jim’ but I remember their theme tunes vividly, so I think either my sister or my nephew watched them. 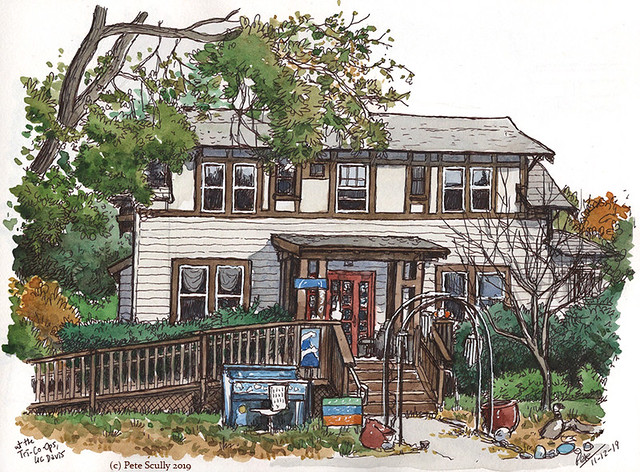 This here is the Tri-Co-Ops building on the UC Davis campus. I especially like the blue piano sat outside. I always think to myself, if Yoda were here he would name this the “Do-Co-Ops”. That blue piano reminds me of, for some reason, Rod Jane and Freddy. They were the musical trio from Rainbow, popular 1980s kids TV show, the one with Zippy and Geoffrey and co. It’s actually Rod, Jane and Freddy, not ‘Rod Jane’ and his friend ‘Freddy’, though if I ever become a country and western singer I would take ‘Rod Jane’ as my stage name. Commas are important. I wonder how many other acts have been betrayed by their lack of comma? ‘Son, Knee and Cher’ for example, or ‘Bat, Man and Robin’, or the other Byker Grove musical three-piece, ‘P, J and Duncan’, who mysteriously killed off one of their members when they transitioned to ‘Ant and Dec’ I’m thinking that maybe Ant ate J, or maybe J is buried under Dec’s deck. Anyway this is the Tri-Co-Ops house, or the Tri, Co and Ops House if you will. 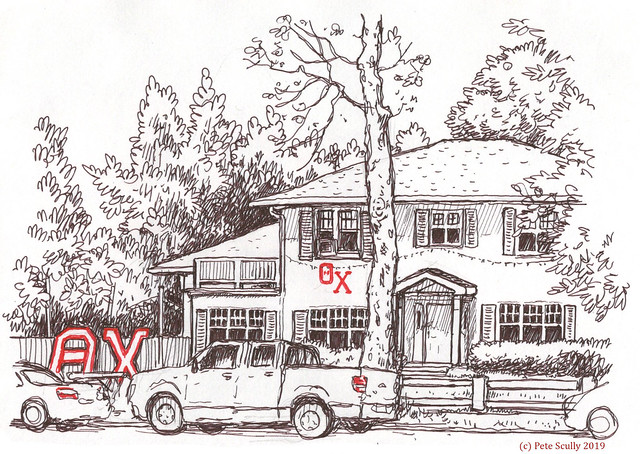 And finally just on the edge of campus is the frat house of Theta Xi. No not ‘The Taxi’. Although it does look like it just says “OX”. Which naturally reminds me…ok this show wasn’t British I don’t think but it was on kids TV in England during that same time period, “Ox Tales”, starring Ollie the Ox. It was Dutch/Japanese I think. Ox Tales was a hilarious show I genuinely used to watch and love, and the theme tune is truly one of the greatest of all time. They should have called him Ollie the GOAT. Anyway, not including the Walker Hall series, these are my sketches from campus (or campus-adjacent) in the second half of 2019, plus a whole bunch of silly half-baked memories of 30-year-old British kids TV shows I didn’t even watch that much. I blame social distancing.

3 thoughts on “playing catch up”