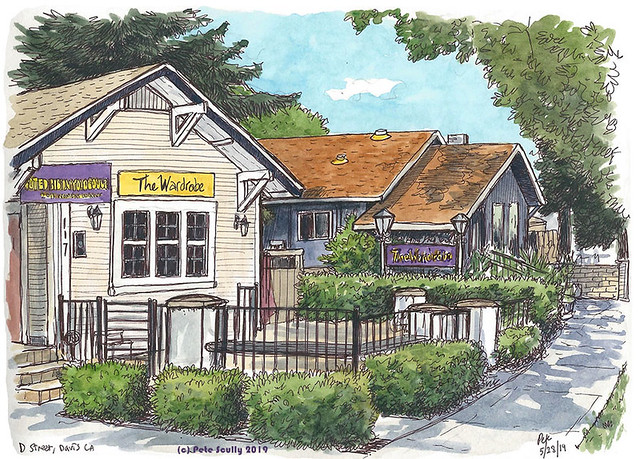 This is D Street, Davis, sketched one lunchtime (and coloured in later). The Wardrobe is a clothing store that used to be somewhere else in downtown Davis, E Street if very recent memory serves (I’m not generally a clothes-shop-goer, except if football shirts are involved) (have I ever mentioned I’m obsessed with football shirts? It may have come up) (if you follow me on Twitter I might have mentioned it in passing). When I think of the Wardrobe though, I automatically think of the Lion, The Witch and The Wardrobe. Which then makes me think about football shirts again, the Indomitable Lions (Cameroon), the Witch (um, Norwich? Ipswich? Luka Mod-witch?) and the Wardrobe (my one, full of football shirts). Ok maybe not. But since we are on the subject, let me tell you a bit about my own history with the Lion, the Witch and the Wardrobe. It was always one of my favourite stories. I adored the animated version from about 1979, it is still one of my all-time favourites and I used to watch it religiously as a kid. When I say religiously, I mean I used to watch it a lot, I had no idea that it was meant to be a fairly religious allegory by the very religious CS Lewis, which was why it was always on TV at Easter, but I was (as now) a very atheist kid who loved a good story. Especially if it involved a massive talking lion. It’s also why I love Turkish Delight. Arthur Lowe was Mr Beaver, and as Burnt Oak’s biggest Mr Men fan, his was my favourite voice in the world. The 1980s BBC live-action version was great as well, but I didn’t watch it over and over like the cartoon. Anyway, fast forward years later, to 2002, when I was living in the south of France. The English department at Aix-en-Provence held an annual play, run by the ‘lecteurs’ and the students, and as I was the drama degree person I was chosen to direct it. My job was to come up with a suitable play, one that could include a sizable and inclusive cast, and attract people to come and watch. I don’t know exactly why, but I got it into my head to adapt The Lion, The Witch and The Wardrobe for the stage, writing the script myself from the original novel, using a minimal set in which much of the props and scenery would be played by four neutral characters called “jokers”. At first suggestion the idea was ready to be turned down, and I’d be asked to do something more traditional, Midsummer Night’s Dream maybe, but I won them over, and we started auditioning. Eventually we found our Queen, our Aslan, our Peter Susan Edmond and Lucy, our Tumnus, our Beavers, our Professor, our Wolves, and most importantly, our Jokers. The Professor acted as the narrator, while the Jokers were the lamp-post, the Wardrobe doors, the falling snow, the reindeer, a window, and anything else that needed a little illustration. I made masks out of foam, props out of cardboard, and costumes out of whatever material I could find. The Queen’s Dwarf wore a blue and white bathroom mat as a robe. The large set-piece battle towards the end of the play between the Witch’s baddies and Aslan’s goodies was my favourite part, because the wolves had lightsabres while Peter and co had French baguettes. I had to leave the baguettes in the sun for a few days to get really hard so that they wouldn’t fall apart in the sword-fighting. I thought about throwing in a pun about a ‘pain’-ful ending but thought better of it (though I did include a bit of Pulp Fiction when the Wolves were interrogating Tumnus: “What does the Queen of Narnia look like? Does she look like a WITCH?”. There was a degree of mispronunciation of English phrases by the non-English cast that have always stuck in my mind, even years later: “phone” instead of “faun”, “Sow” instead of “thaw”, and the brilliant “you’ve been a noyty boy!”, spoken by the chief of the Wolves. While I’d spend a lot of time helping with pronunciations, I deliberately left some, like that one, in, as they added something to that character’s voice. Overall it was hard work, very silly, memorable and hopefully fun to watch, but I do know that one of the faculty had an eight-year-old son who absolutely loved it, it really worked on his imagination level, and wanted to talk about it loads whenever we saw him and his mum afterwards. Not sure if the adults enjoyed it as much but as they French say, tant pis. I loved it. So, I’ve always loved that story. I really enjoyed the modern film adaptation, even if Ray Winstone’s very good Beaver was still not quite Arthur Lowe, and Aslan was the Force-reincarnation of Qui-Gon Jinn, I loved it. I would like to go back to that story somehow, perhaps make a Lego animated version of it. If I do, I am keeping in the phrase “you’ve been a noyty boy!”

So yes, when I see the word ‘Wardrobe’, I think of all of this.

3 thoughts on “the world of wardrobes”