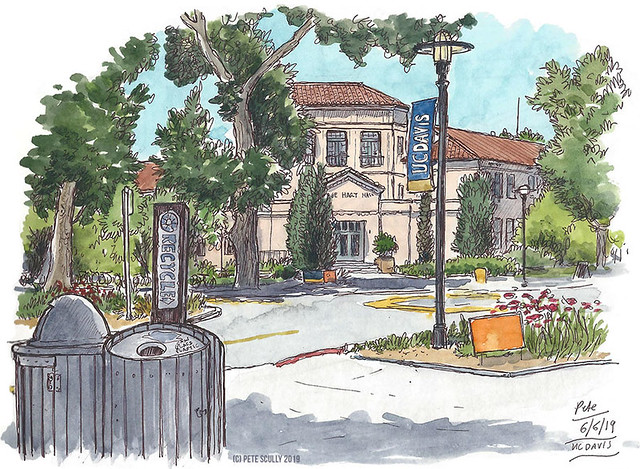 It is that time of year again when I draw Hart Hall again. This was sketched last week, stood in the shade of the Shields Library at UC Davis, the weather is getting more Davisesque and roasting my brain away. I was supposed to go to a meeting today in this building, but I was in a different meeting instead so I forgot. The meeting I was in was far more important though, and didn’t require walking through hot heat. I want to go out and draw more at the moment but the heatful weather is giving me reservations. If I were in another hotted up place like Seville or Rome I would have no compunction about sketching the hot city but when it’s over a hundred in Davis my brain says No, Don’t Bother, You’ve Sketched It Before. The initial flurry of sketchtivity this year has tailed off a bit, and my busy weekends have meant a lack of sketchcrawl organizationing. There will be some upcoming monthlies I promise you, though the one I had planned in San Francisco will not take place for a while longer yet, maybe in the late Falling Summer or the early Autumnal Fall. I’ve been planning a themed sketchical history tour in North Beach, I’ve been drawing the map and everything, but alas life finds a way, so I am putting it on the backbencher for now. I’ve also been planning a Sacramento Sketching crawl as well, mostly because I want to sketch there again but also because it is fun to meet other sketchers there. It is always hotter in Sacramento than Davis though, I find. I did go to the new Star Wars land at Disneyland last weekend though, that was fun, I will post the couple of quick sketches I did there at some point. Anyway, this is Hart Hall, which is not despite the name named after my old drama teacher at school, whose name was Mr Hart. I don’t think Mr Hart thought too highly of me, if I’m honest, I don’t think he thought I was altogether serious about the dramatic arts. He may have had a point, given that I wrote and performed two musicals at school with songs like “Don’t F**k with me, I’m Robin Hood” and “Get Lost, Dracula”. To be fair, they were obviously genius. I remember him getting very cross with me and my friend Terry once though for coming up with very serious characters in class, but giving them silly names like Freddy Ready and Todd Cod. I mean, what is wrong with Todd Cod? If I ever meet someone called Todd Cod I am going to be so pleased. I did work with a guy once whose last name was Reddy  but I can’t remember his first name and it definitely wasn’t Freddy. I have met people over the years with much sillier names. I won’t name names here, but they definitely existed.

One thought on “hart warming”