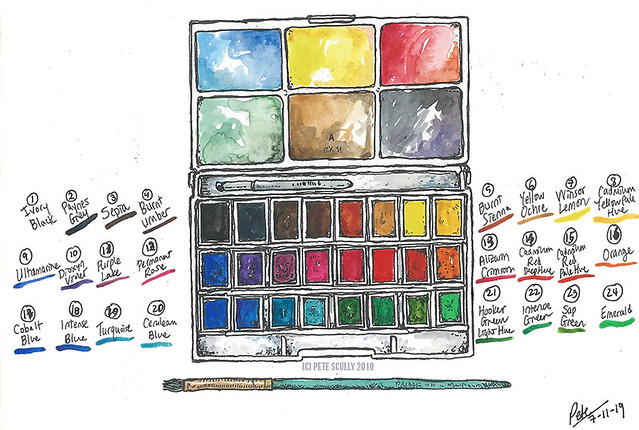 Ahead of the Amsterdam Urban Sketching Symposium, I decided I needed to deal with my paintbox. I rearranged the colours, took some out, added some in, refreshed them all, and this is my paletter this summer. These are all Winsor and Newton watercolour paints, mostly Cotman but with one or two Artist’s ones in there too. I like using this, the deluxe sketchers box, it fits into my hand or attached to the other page of the sketchbook with a rubber band pretty well. I needed to make a guide to the colours in case I forget, so that’s what this is. This could be a new advent calendar, 24 colours, actually that is not a bad idea. I have some new brushes I just bought as well, bigger than I usually use, so that I can paint on bigger paper for some of the workshops I am taking. I got some 11×14 Fabriano paper, which is not I must say really urban sketching material, being really big an not able to fit into a small bag. However I’m keen try something new, and the big pad of paper just about fits into my gym bag (but it only barely fits into my new suitcase, which is small). This paint set however is very small and compact, and fits a lot of stuff in there, the way I like it. 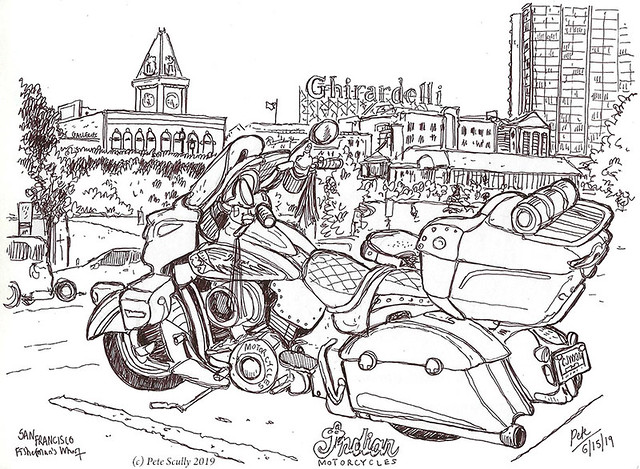 I was in San Francisco a couple of times recently, one with the family (to watch Hamilton) and one by myself (to sketch loads of stuff). On the first one, we stayed over in Fisherman’s Wharf (not always my favourite part of town, but there is lots to see). I only managed one sketch, as I spent a lot of my time playing X-Men vs Street Fighter at the Musee Mecanique. I love that place. Also, it was cold! We were escaping the heat of Davis, but the city was pretty chilly. I drew this one sketch of a very elaborate looking motorcycle parked near Ghirardelli Square. “Indian Motorcycles” is the manafacturer. I was going to colour ir in, but it was cold and I was getting tired standing there. I try to be more conscious of my body saying “time to rest Pete!” these days. Yet I am still keeping up being more active, with the gym and exercising thing. We did go to Ghirardelli’s that evening, and I had this enormous chocolatey sundae thing called a ‘treasure island’ which amazingly did not derail my diet. See, you can diet and still eat massive chocolate indulgences every now and then. This was after I had pizza and beer for dinner. The pizza-beer-chocolate sundae and arcade-games diet – hey, it’s working. Now, the only other sketch I did that weekend was while waiting for ages at SFO for my Global Entry interview. Global Entry is like a fast-pass when I come back into the country. However I had to wait quite a while for my turn, so we missed out on going to Alcatraz. At least Hamilton was really good, very entertaining. 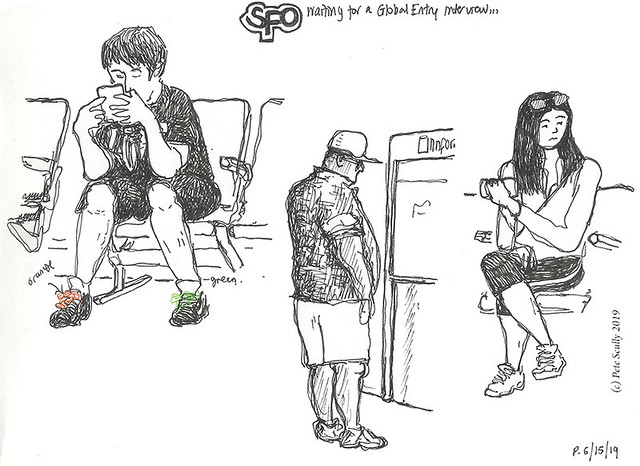 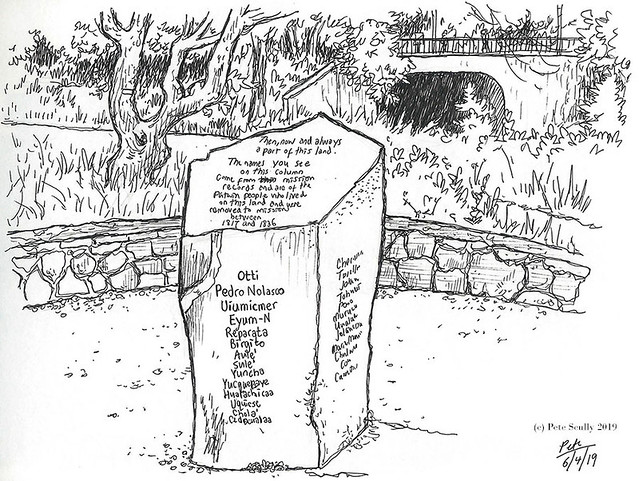 This is a nice spot in the UC Davis Arboretum, it is the Native American Contemplative Garden. This garden honors the Patwin people. Davis and the surrounding areas are part of the original Patwin land. The garden was designed by Bill Wright, a Patwin Elder, along with his family and students in the UC Davis Native American Studies department, among others. At the end of the winding stonework and path is a small column of rock inscribed with the names of Patwin people who lived on this land and were removed the missions between 1817 and 1836. Around the garden are stones with some Patwin words inscribed on them, such as “Ye’te we” (“Dream”) and “Mi muho” (“You sing”). “P’atwin means people”, as it says on one of the stones. I had never sketched here before, so I came along to sit in the shade and try to imagine California’s past, before the Europeans came along. 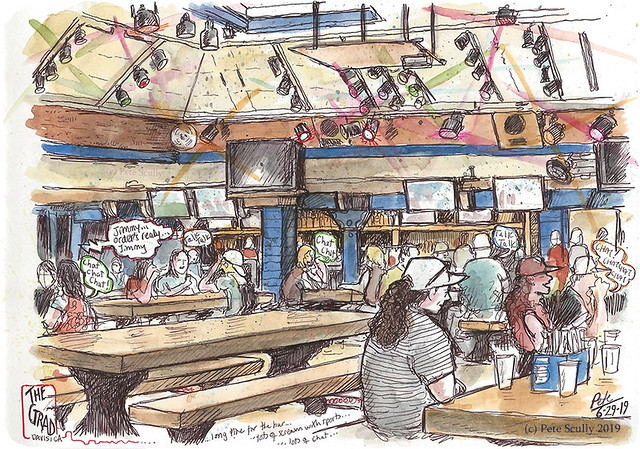 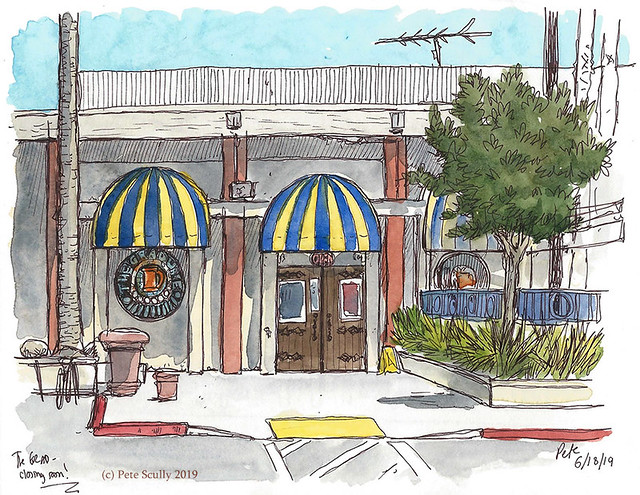 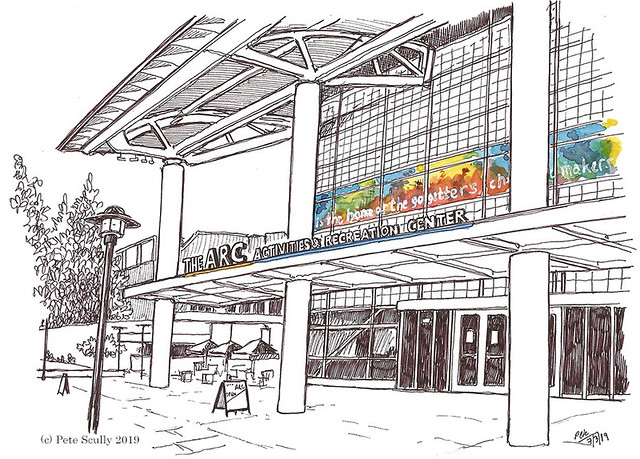 I have a lot of sketches to scan, but I’ve been a bit scanning-shy lately. I did a load of sketches in one evening at the Mondavi Center, which will take me ages to scan. But, I’m back. Anyway, this is the ARC, the main activities and recreation center at UC Davis. I was never an ARC member (gym? what is that?) until just recently, when I decided I needed to lose some weight so that I could fit into some of my less baggy football shirts. I set myself a target, 20 pounds in three months, with today being the target date. I had a plan to make changes to my diet, not overdoing it but keeping more track of it, drinking more water, not snacking during the day, not skipping meals. I also decided to walk more, which has been amazing. I used to walk loads, back when I lived in England, I loved walking. I ride my bike here in Davis, but because of the heat I usually say, ah no walking for me, too hot. The past few months I have been walking to work (and back) and now I think nothing of it. I’ve been going on long evening walks around the North Davis Green Belt, seeing all the other walkers and joggers, tut-tutting at the dog owners who don’t understand the Davis Leash Laws and think they don’t apply to them, listening to podcasts about 1990s football and formula 1, taking photos of the sky. I also started going to the gym, which was never ever a thing for me. The first time I went in I didn’t want to appear like a total newbie so I’m like, ah yes, the elliptical, yes, oh I know this, yep, definitely, yes I know it’s not working properly thanks, I’m actually just testing it for a minute before getting on this exercise bike, yes thanks I know the seat is too high I like it like that, I do know how to change it I just don’t want to. I’m more used to it now. I use the same three or four exercise machines, I haven’t touched the weights or anything like that yet, I might need to go to one of those beginner’s orientations. I like to listen to podcasts or even watch stuff on Netflix, I’m feeling quite comfortable about it now. I have my new gym bag. I even got, which was a very fancy step for me, an Apple Watch. Normally I use a Lego Watch so this is quite an upgrade. The Apple Watch tracks all my walks and runs and everything. It even tells me off if I have been sitting down too long or if it thinks I need to breathe. I actually love it. I’ve been hitting all my steps targets, and tracking my weight and calories, which has been fun, as I like to keep stats. Anyway today, July 4, I hit the target I was aiming for, right on time. I even had to buy new shorts. Happy birthday USA!