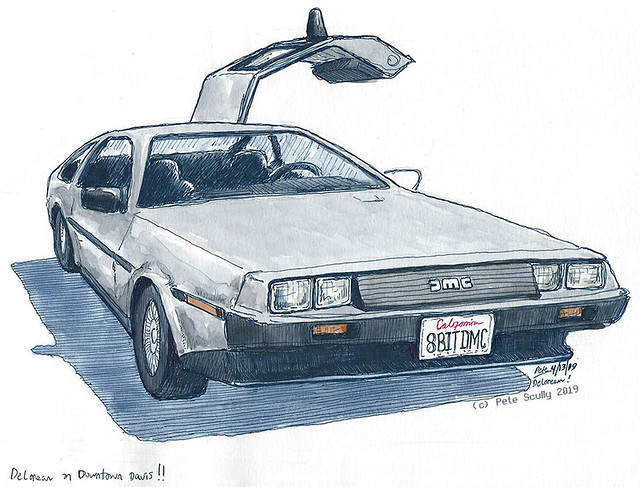 It’s not every day you see one of these! This is a DeLorean, in case you weren’t aware, a car from the early 1980s, made in Northern Ireland, but immortalized in some movie about time travel, you might know it. There is a DeLorean association in this area and on Picnic Day in Davis they are often part of the parade. After my son’s soccer game in the morning, we came downtown after the parade had already happened, and got ice cream. Well I didn’t get any because I am officially on a self-imposed diet. So, when we saw there were three DeLoreans parked along the sidewalk of E Street, I couldn’t resist stopping and sketching. Three DeLoreans! Well I assume there were three DeLoreans, it might have been one DeLorean visiting itself from the future (or the past). As I sketched, the owner of this one came by and we chatted, it was very interesting to hear about how the various DeLorean owners help each other out – owning a car like this you kind of have to become an engineer, and parts aren’t exactly easy to come by (the plutonium alone is tricky enough). As you can see I drew the wing mirror in on the other side before the car door was open; when they opened the door, well I just had to draw that. I’ve sketched a DeLorean once before, in the Automobile Museum in Sacramento. While I sketched, several young lads would come up and ask the owner to take their photos with it, even though they were born many years after 1985. My family came back, having eaten their ice-creams, and it was time to either go to campus for Picnic Day fun or go home for a nap. We chose the second.

4 thoughts on “DeLorean in Davis”