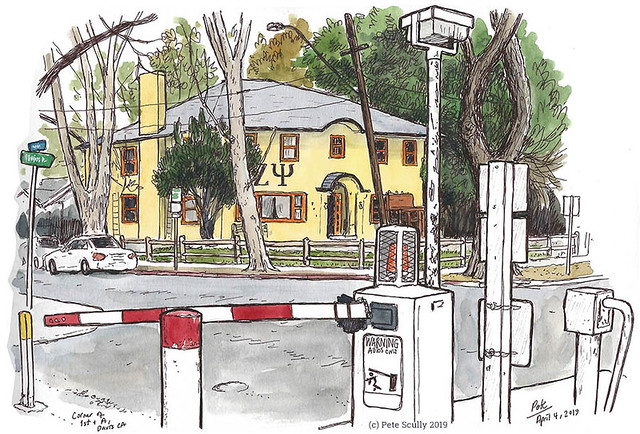 This is the corner of 1st and A. If Davis were a chessboard, this might be where you find the Rook. Davis would work well as a game of chess. In fact this might well be the middle of the board, because a game of Davis chess might be between the City of Davis and UC Davis, the natural delineation. Or it might be between the students, who spend just a few short but massively formative years here, and the residents, living here much longer-term and bringing up families. Or the chess game is the cyclists and the motorists (nah, in Davis the cyclists win that one). Perhaps it could be a chess game between the small businesses downtown and the big box companies just outside? Yeah, that’s been a game for quite a while now. Maybe the chess game is between the Davis Moms At The Park and Everyone Else. Or the chess game is between the Youth Soccer Teams trying to find a spot to practice at the park and the Youth Baseball teams trying to find a spot to practice at the park. Could be that the chess game is a downtown match between the Thai Restaurants and the Frozen Yogurt shops? Again, this could be happening. Or maybe the most thrilling chess game would be between the turkeys of Davis and the humans of Davis? Downtown Town would have been the king. I told you about Downtown Tom a long time ago, but come to think of it I never showed you the drawing I did for the Pence Gallery, I’ll have to dig that out. Downtown Tom, what a legendary beast, he was the Kasparov of Davis.

This is the corner of 1st and A. I have drawn this corner before, a few times, already. This building, a frat house (how could you tell?), was painted white before but is now custard yellow. I like the warning sign on the barrier, warning that it might drop on your head. It reminded me of the fate of Cyrano de Bergerac. “Mais on ne se bat pas dans l’espoir du succès, non, c’est plus beau lorsque c’est inutile!”