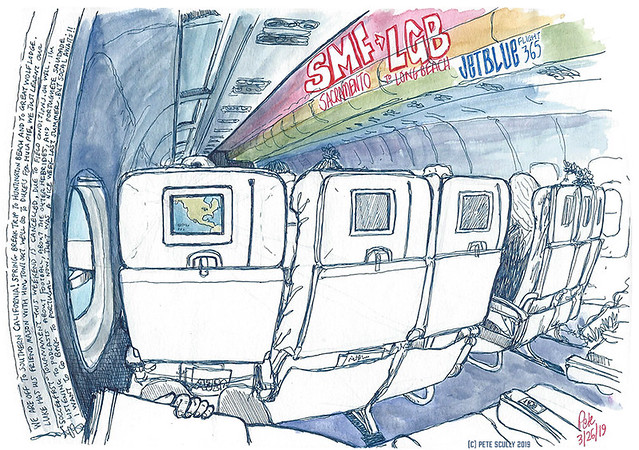 We went to Southern California, for a short Spring Break vacation away from the rainstorms we’ve been having. Tell you the truth, we thought it might rain in Southern California too, and were taking a bit of a chance staying right by the beach with a nice pool, but dangit it was a chance we were willing to take. Besides, our last night there would be at Great Wolf Lodge, an indoor water-park forest themed resort for the kids which would keep us out of the rain and yet still, oddly, soaking wet. As it turned out, the weather was gorgeous and sunny, so there was plenty of beach time and outdoor pool time in Huntington Beach (meanwhile, Great Wolf Lodge was a bit of a let-down, so we ended up going to the cinema). But first, we had to get there. I sat in the row behind la famille, so I sketched and listened to podcasts. We flew JetBlue into Long Beach. When we landed, I saw something which was just, well, WOW: 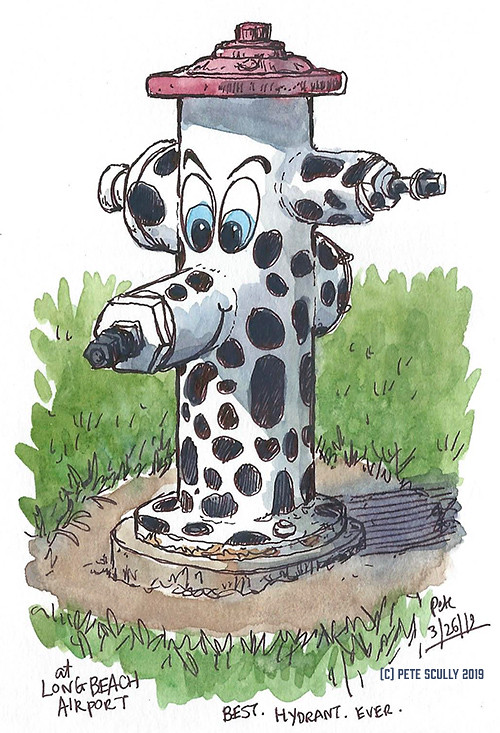 A doggie-themed fire hydrant!! It was in a little fenced off grassy area designed for pets to go pee-pee. Now as someone who sits sketching hydrants and getting t know them quite well, I’m always one to roll eyes at the boring tired cliche of dogs weeing against hydrants, but this is just amazing. Except actually I really hope dogs don’t wee against this one, gross. But isn’t this the best hydrant you’ve ever seen? I never thought I’d see one so cool. Another one to add to the collection.

Here is another JetBlue plane, which I sketched while waiting to board for the flight home. I’ll post the beach sketches later, just imagine them (yellow at the bottom, light blue at the top). This one was drawn, like the top one, in the dark blue uni-ball signo pen, it looks really nice on the paper. I have quite a few planes in this sketchbook now, and with those wings you have to draw them over a two-page spread. You can see where the page break is. I spend a lot of time in airports, on airplanes, up in the sky. I remember being a kid and being terrified of the very thought of flying (despite being obsessed with air force jet planes), I was so scared of planes that I would not let anyone else in my family fly. When I was six my older sister was going away somewhere, a school trip to Germany I think, and I wouldn’t let her leave the house, cried my eyes out, I was hysterical at the thought of her flying. She eventually went, and I’m glad she did, because from Germany she brought back this amazing stuff called ‘Nutella’ I had never seen before, and started my lifelong love of this mysterious ‘Nutella’. When I was 10, my family finally convinced me to fly, and I got in my first ever plane, flying to Ibiza off the coast of Spain. They took me to see the pilot in the cockpit (it was the 1980s, they probably would have let me fly the plane), and I’ll never forget the pilot asked if I wanted to see out of the window, and I said yeah, and so he just tilted the whole plane sideways! I thought that was cool, but everyone back int he cabin were freaking out a little bit. After that, I was fine. No idea how many planes I’ve been on since. I don’t really like flying, but it’s more that I don’t like the hassle of airports, I’m not a fan of taking off and landing, but the bit in the sky I’m totally fine with.