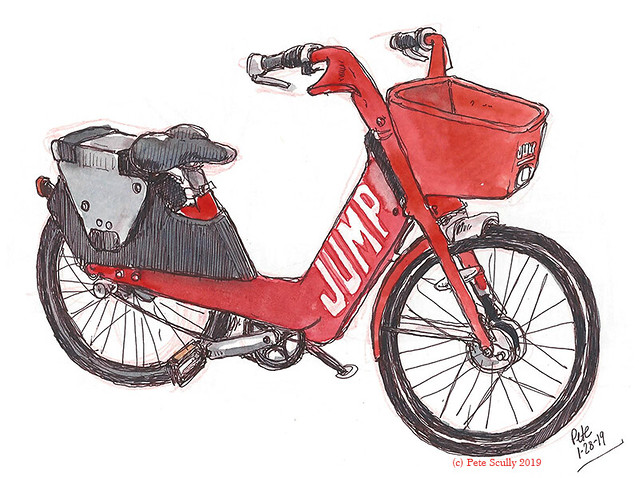 These red bikes are everywhere right now. “Jump” Bikes they are called. I don’t know much about them except they are apparently rentable and work with some sort of app. Oh and you don’t have to bother parking them in proper bike racks, you can just leave them wherever you want, like on the sidewalk or by the doors of any building, like you’ve not noticed the bike racks that are like right there. Certainly seems that way. Do they go faster than a normal bike? Seems like it. I wouldn’t know, I’ve never ridden a Jump bike, for all I know they are smooth as martinis (I wouldn’t know that either, I’ve never drunk a Martini, for all I know they are smooth as Dr. Pepper) (I’ve never drunk Dr Pepper either, I could go on all day with other things I’ve never done, it’s a long list). I don’t think these Jump bikes actually jump either, I would have assumed they bounce down the street like Tigger, but they don’t. They aren’t particularly pretty, being bright red with those rigid shapes and fixed on basket (why can’t it bounce around uncontrollably like my wire frame one, coming off its hinges every time I go over a bump?). Haha, here’s me talking about these Jump bikes, I’ve never ridden them, I can’t even really draw them (seriously why do I even bother drawing wheels, I can’t draw circles while standing holding a sketchbook) and I know nothing at all about how they work. This is how people do it now though isn’t it, just say ill-informed stuff online when it would take 10 seconds to find that information out, if only we had instant access to like the entire world’s information in our pockets on little electronic devices or something, that would be a great idea. (Like British Tory MPs who tweet incorrect information about the Marshall Plan which is so easy to call out, almost like he knew that already and was trying to get attention for himself) (errrr…no, I’m not doing that. /Shudder!/) Alright fine, let’s look up these Jump bikes. /Googles Jump Bikes/ Ok, so they are, wait let me get this right, ride-shares? Owned by Uber apparently. They were introduced to Davis and UC Davis in May 2018. Here’s an article about them which explains them more.  Unlike those bikes they have in London they are dockless which means you just leave them anywhere (apparently you get fined $25 for not locking them up in a proper rack). They do have an electric assist which is probably what the ‘Jump’ means. I don’t fully understand the fee structure but $1 for the first 15 minutes then 7c a minute after that seems to be the thing. So, you leave the bike. Ok, does that mean if someone else wants it they just take it?  Do you have to look for another one? That’s great, when you wanted to ride home and oh man, they are all gone – better call an Uber…oh I understand now, they’re owned by Uber. Now you are probably reading this thinking, you dinosaur, I love these, my life is so much easier thanks to Jump bikes, get back to 1985 Marty McFly. To which I say, these don’t hover, they don’t even jump. I’m sure these work for a lot of people but I think I prefer just having my bike, I think I’d feel a bit stressed out by these modern contraptions with their fee structures. Of course when I get a flat tyre and these Jump bikes go whizzing by me, I’ll be like, noooo!!!!! Curse you Jump bikers!! Now I’ll have to walk!!

4 thoughts on “you say jump i say how high”