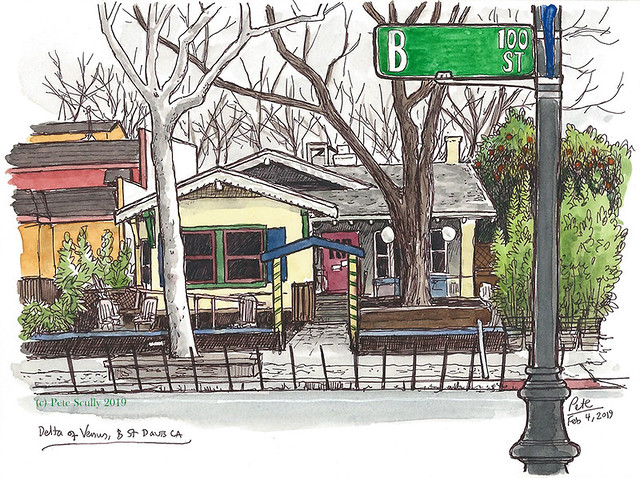 This is the Delta of Venus on B Street, Davis. I sketched it over lunchtime while the weather was taking a quick break from the winter storms. It’s been rainy, it’s been windy. In fact I had to stop this sketch before I could colour it because the rain started up again, along with very small hailstones. I added the paint later on while my son practiced soccer. Delta of Venus is not a place I go very often – actually I don’t go anywhere very often, but it’s been a few years since I last popped in for a sandwich – but I have sketched it once before. Not much has changed. I’ve been spending a lot of time lately looking over my massive file of Davis sketches. I have done a lot of drawing since I moved here at the end of 2005. It’s almost annoying looking over it. Here is another like so many others, a building, across the street, something in the foreground. There will be more just like it. However this summer I will be going somewhere very different – Amsterdam! I was able to secure registration for the 10th annual International Urban Sketching Symposium. I’m pretty excited – I’ve not been to Amsterdam in twenty years, and never ever sketched the place. For sure, there will be some time in Belgium as well (I’ve not been there in a decade). It’ll be great sketching Amsterdam, it’s so different from Davis. Amsterdam is flat and full of bikes whereas Davis is… more drink! That’s a Father Ted reference for those who need footnotes. There will be more just like it.