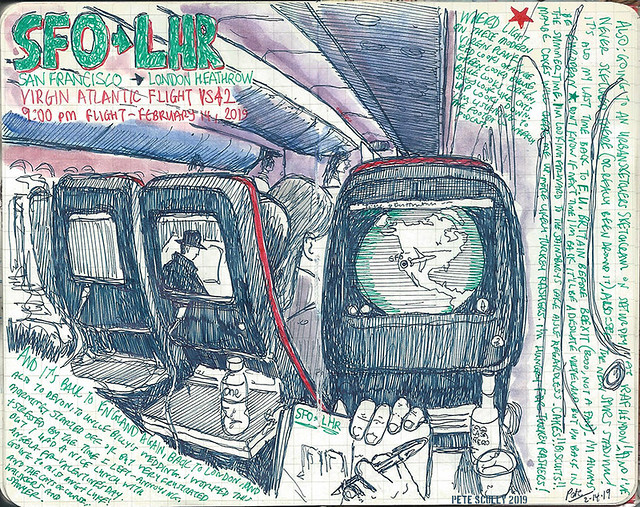 I took a quick trip to England for family stuff, and any trip of course means getting out the little ‘Lapin’ Miquelrius notebook which has for many years now been dedicated to the in-flight sketch. The paper is fun to draw on, less good to add paint on (and I’m getting less good at painting on it). Both flights were Virigin Atlantic, the outbound one was one of the newer flights again, I sat by the window, I didn’t get up, my legs hurt. I find it so uncomfortable to sit on those seats now for long periods, or rather I find it uncomfy when I try to sleep. I watched ‘Jurassic World Fallen Kingdom’ on the way over, which I suppose was like being asleep. When I landed at Heathrow my body ached, and then I sat in slow stop-start traffic for a couple of hours across London which was worse. I need to get one of those lie-flat seats in upper class. The flight back was in one of the older planes, and those seats are actually more comfortable, though the legroom is still minimal. And I love how people have massive hand luggage that can barely fit in the overhead lockers, and also bring another bag that definitely can’t go under the seats. My immediate neighbours were not those type, thankfully, and it’s always a sigh of relief to have good flight neighbours. The flight itself was smooth on the way back, the food was good (which I’m glad about, as I rushed to the flight, only just making it, and didn’t pick up a sandwich from Boots on the way). I used the opportunity to add some paint to my London sketch from the night before, a pub sketch from Soho, and I discovered that my airline seat was exactly the same width as my Stillman and Birn Alpha landscape skecthbook. It was great to be back home in London, my favourite city, and also to spend time with family in Devon, and it was also great to be back home in California. 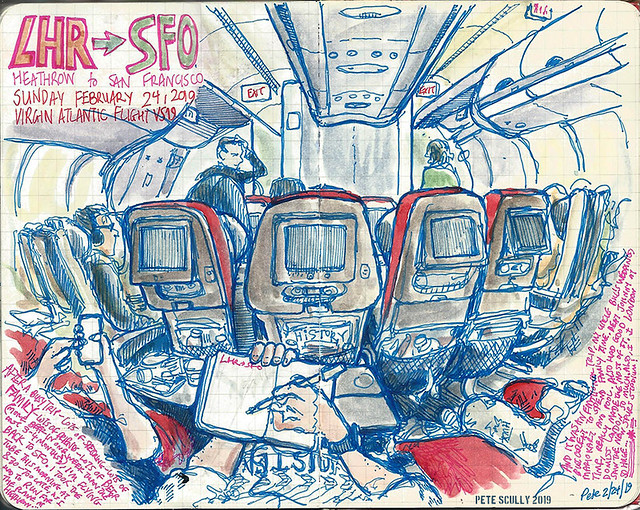