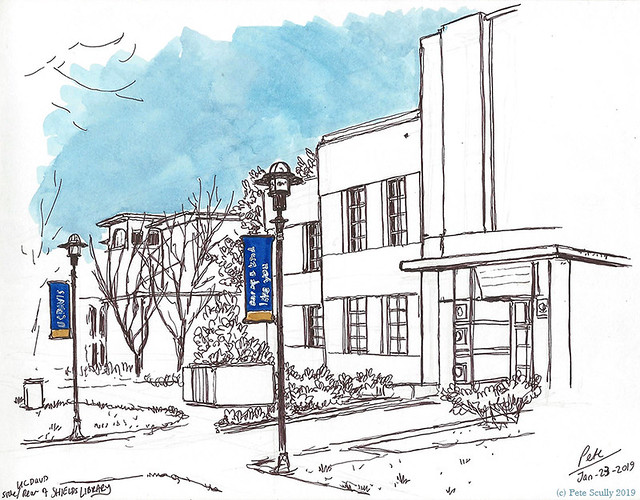 Another quick one from campus, this is the rear/side of Shields Library, a very big library full of academic books. January was very long this year wasn’t it, don’t you think? I know it has the same number of days as every other month with 31 days, and there are even a couple of holidays, but it just really dragged on. Like looking at your watch and seeing that it’s still 2:41. Nope, still 2:41. I’ll check again now, at least ten minutes have pa- still 2:41? What’s going on? January is like waiting for your food at the restaurant only to be told they lost your order. January is like those endless commercial breaks during any primetime American TV show. January is like those but actually it’s election season so the ads are all repetitive and political nonsense (actually no, January is nothing near as bad as that). January is like when you get stuck on a delayed Eurostar and they have to make announcements every ten minutes in English, French and Dutch. January is like a meeting where it feels rude to be the only one getting up to leave at the end but someone always has an extra question to bring up and they take a really long time bringing it up even though it has nothing to do with anyone else but them but you still have to sit there and pretend to listen out of politeness, and then you start piling up your notebook and pens and then they go into an all-new topic and nobody seems to want to wrap it up. January is like being stuck on the freeway in traffic for hours after time spent away from your home and all your stuff but your phone and iPod batteries are dead and the only thing on the radio is Wait Wait Don’t Tell Me. I could go on but January would be like one of my blog posts where I just say whatever comes into my head, like this. January goes on forever. And then February is like, ok now it’s March.

One thought on “so long january”