Another panorama intended for colouring in but ultimately left as is, due to running our of time. This is the last one for London, then I have another post from elsewhere in England, and then it’s Davis all the way. It was the day of the England v Croatia semi-final in the World Cup. The evening before we were in Stratford-upon-Avon, watching France eliminate Belgium, and when we got back to London I took the tube down to central London for some last minute sketching and shopping, ahead of our trip to the Iberian Peninsula. This is Seven Dials, which is a junction of seven narrow streets located between Shaftesbury Avenue and Covent Garden. It’s one of my favourite spots in London, being right by the London Graphic Centre (where I stopped by for some replacement paint half-pans). That’s one of my favourite shops in London. The other is just around the corner, Stanfords, the cartographers and travel book store. I love a map. Ironically I get lost quite often. I think I see maps like art, beautiful objects of winder and magic that I just can’t understand nor explain. I always get there in the end, even if takes a long time. Seven Dials in London reminds of Seven Dials in Brighton (aka London-by-the-Sea), where in the early hours of one New Years Day a couple of decades ago I got terribly lost trying to find my way back to the indistinguishable house I was supposed to be looking for where my companions were staying. Brighton I thought is an easier place to navigate because there are only three directions – North, East and West, with South just being The English Channel. Haha, you foolish boy. I could not remember the name of the street I was supposed to be on, just that it was one of the ones going off of Seven Dials. Hours of walking around each of the ‘Dials’. I did have a mobile phone (this was 2000, well 2001 by that point) but it didn’t work very well and I may have been out of pay-as-you-go credit. I found it eventually, and forever have an amusing Brighton anecdote to tell.

But back to Brighton-by-the-Land (David Devant reference), I stood here sketching a panorama as people walked by, many heading to the pub to start drinking ahead of cheering on England. A lot of people, I noticed, were wearing yellow clothes. Yellows skirts, trousers, shirts, the occasional hat. I don’t think this signified anything, and certainly has nothing to do with the football. Perhaps yellow is ‘in’ this year. I don’t know fashion, but once thing I do remember about living in London, people would say, “oh green is ‘in’ this year,” or similar. “Brown is the new Black.” Football shirt fashion I understand, but real clothes, well I just wear navy blue and black mostly. Anyway I did notice this trend of wearing yellow, but I didn’t add anyone to my sketch in a yellow blouse or anything, so forget I mentioned it. The only colour I added, well you can see for yourself. The Union flag stands out. England were in the semi-final, and while it’s been a few decades since this was the flag waved at England games, it still seemed nice to include it.

I went home to watch the game with my family. England lost to Croatia. That’s that, then.

By the way, you might be interested in seeing the last such sketch I did in this neighbourhood, four years ago at the end of Monmouth Street, looking toward Seven Dials, below. This is one of my favourite sketches I have done of London.

Ok and one more for luck, this is a sketch of Seven Dials I did a few years ago around Christmas-time. At least in this one you can see the top of the coloumn. London can be beautiful sometimes. 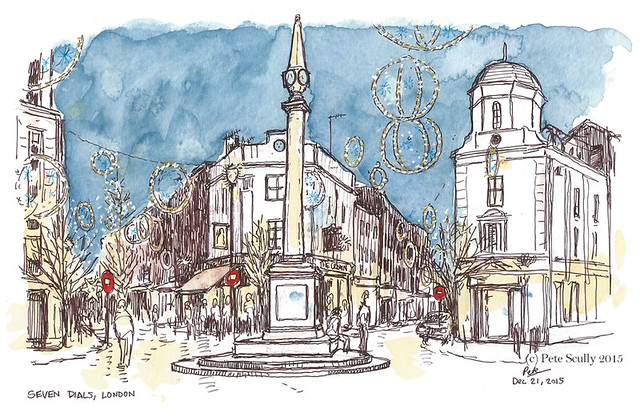