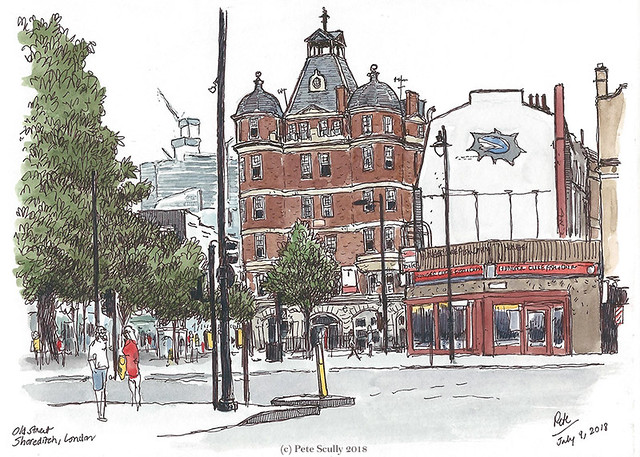 London, early July. It was so sweaty. Air-conditioning is a thing that happens to other people. This was, I was often told, a heatwave to rival the one that happened in the year I was born. That summer was legendary, a long mid-70s sun-fest. I was too young to complain about it then but I’m sure I gave it a good old go non-verbally. I’m not a hot weather animal, which makes it all the more surprising that I now live in the California Central Valley, which has Really Hot Summers. “Dry Heat”. Not so much in humid London. While the temperature is lower than back in Davis, London summers can be unbearable. Specifically, London summers when you have to use the tube, especially when it’s packed, which is often. We went down into central London to go to the British Museum. I figured, it will be nice and cool in there, among all the marble. What we got was a ridiculously sweaty British Museum with no air-conditioning, with a large greenhouse in the middle. I tried to do some sketching in the Greek rooms but was sweating too much. Eventually we left, got back on the sticky tube, and went over to Old Street to find a very special store. I’ll tell you about that in a minute. Above, I managed to sketch this scene of Shoreditch High Street. It was hot and sticky but it was mostly overcast, so at least there was no baking sunlight. In the background, new buildings going up in the City. London is changing, always changing. 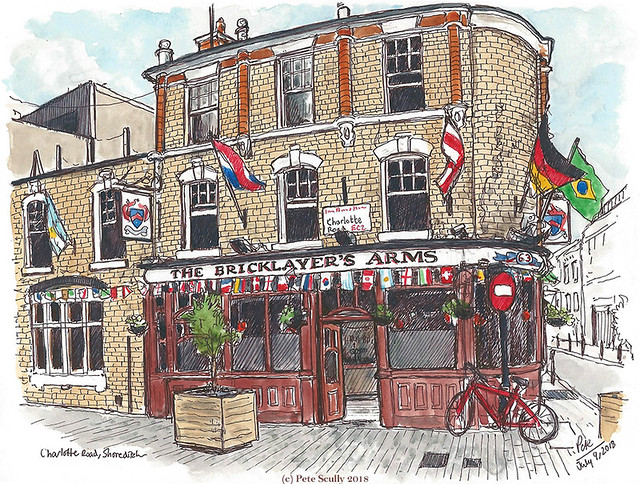 This is nearby, the Bricklayers Arms. I’d wanted to sketch an old pub, old pubs are becoming a little rarer each time I return (at least the ones that remain get a little older each time I come back too, if you think about it). I’d never been here before. I never really went out around Old Street and Shoreditch before, except a couple of times years ago. I wasn’t really Cool enough for this part of town. That was my excuse. I really liked sketching this – colourful flags, and lots of bricks. After I was finished with the sketch I popped in for a pint before heading home.

But before I did this…further down the street was (during July only) the pop-up store of Classic Football Shirts. This was on the back of an exhibition of old football shirts called ‘Fabric of Football’ which had taken place in London this year.Now if you know me you know that I am obsessed with two things: fire hydrants, and football shirts. Ok I’m obsessed with old languages, travel, Formula One, noodles on toast, Marvel comics, Star Wars, Tottenham, and obviously drawing, but if you’ve ever followed my Twitter feed during football tournaments or any other time you’ll know I’m in love with those colourful uniforms. I pretend I know all about things like tactics and player fitness, but I’m usually just saying words I’ve read in a Jonathan Wilson book to sound clever. With football shirts though I feel like I do at least Know My Stuff. So it was a pleasure beyond pleasure to come here and browse through the old shirts, mostly the ones from the 1990s, such as that great Nigerian shirt from the 1994 World Cup (never mind the 2018 one, the home and away from 94 were the real classics). I was also pleased to find they had the very shirt I was wearing (1993-95 Spurs home shirt) on display outside the store. I got a few compliments at various times on this trip for this shirt, by the way. The 1990s kits have made a comeback in a big way (still amazed all my 90s shirts still fit, actually…). Anyway this place was a highlight of the trip! Check out their website at: https://www.classicfootballshirts.co.uk/. I didn’t buy myself anything (all the things I wanted were a little bit expensive) but I did get my son an AS Roma shirt from 2016. 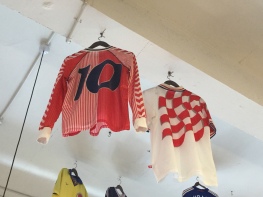 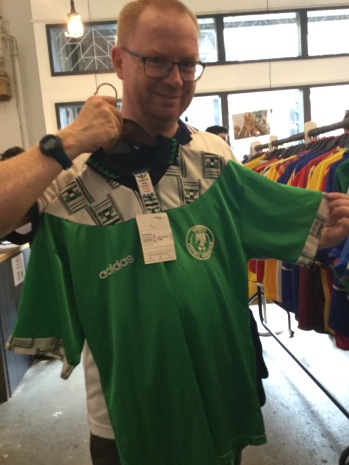