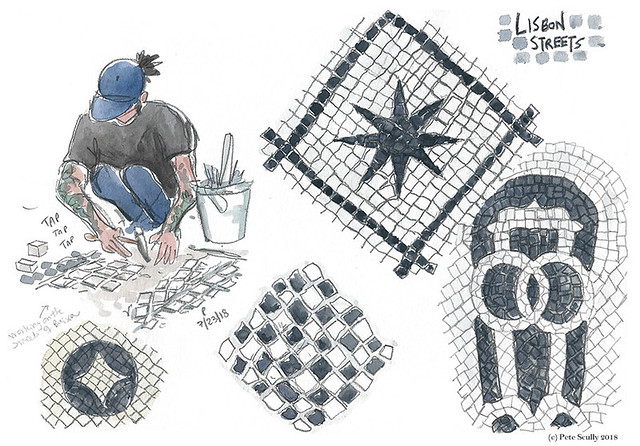 I intended on waking up early, as I like to do when I travel, and wander Lisbon’s streets in the dawn light, try to find a little bakery with amazing delicious pastries. However my bed was just too comfortable, so I stayed there. It was the last full day of my three-week trip before I would be flying back to America. I’d been to London, Warwick/Stratford-upon-Avon, Madrid, Toledo, Porto, and Lisbon. I was overdue a long lie-in. But I had a Lisbon to sketch, so eventually I dragged myself out from the comfy covers and headed towards Alfama. I walked through the long grid system of Baixa, which owes its layout to the massive rebuilding of Lisbon after its devastating earthquake in 1755. That earthquake really was devastating – it is estimated to have been between 8.5 and 9 on the Richter scale, and resulted in the deaths of anywhere between 30,000 to 40,000 people in Lisbon alone, most of whom died in the resulting firestorm and tsunami caused by the quake. Lisbon was rebuilt, but the Baixa area is sometimes called Baixa Pombalina, after the Marquis of Pombal who led the reconstruction and was responsible for a more earthquake resistant architecture. Now I didn’t end up do any sketching around here, except for the man above, a workman repairing some of the mosaic pavement tiles. So I also drew some of the various mosaic pavements I came across in Lisbon. This style is ubiquitously Portuguese, black and white square tiles, often laid out in intricate patterns, a feature especially common in Lisbon but also found in far-flung former Portuguese colonies, like Brazil and Macau. 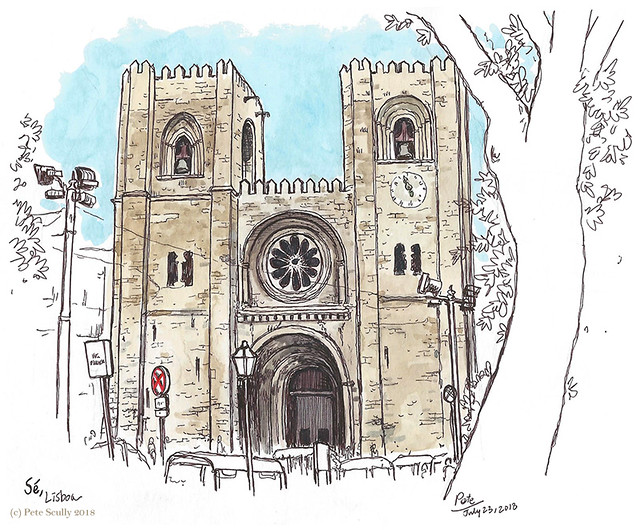 I passed into the Alfama district, which I did not visit back in 2011, and headed up to the cathedral, the Sé. You’ll remember that the cathedral in Porto was also called the Sé. IT is related to the English word ‘See’, as in the ‘Holy See’. Do you see? Anyway it shares some similarities (or “Sé-milarities”, eh) with the Sé in Porto, well I think they look alike, I don’t care what you sé. Anyway I sketched outside next to a statue of a famous actor (I’ve never heard of him) and walked around inside. It turns out the proper name is Santa Maria Maior de Lisboa and it dates back to 1147, when the city was retaken from the Moors. Actually the cathedral was built on the site of the city’s largest mosque. The doors were interesting, and as you can see from the inscription on the metal part, they date I think from 1933, made by a bloke called Vicent Esteves, aka Vince Stevens, old Vinnie Steves. I am assuming the doors are from 1933, that is, for all I know the cathedral was built then and the whole of Lisbon was built then too. In the post-truth era people might believe this. There was another symbol in the masonry on the wall, a circle with a greek cross, although it might be the view you see when being thrown down a well by four radishes. 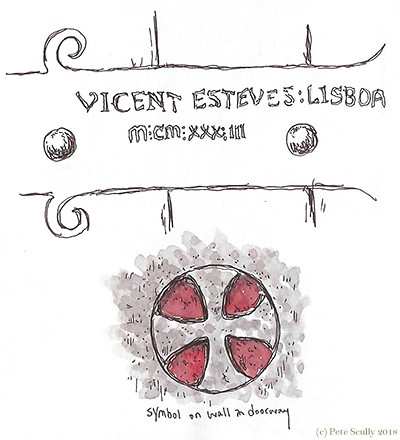 Ok enough cathedral based silliness. So I started walking around Alfama, an old windy-street hilly part of town with red rooftops and twisty alleys. Then I stopped and ate some sardines for lunch, the classic Lisbon food, I had forgotten how many bones are in those. I found this post-box, next to a similar looking blue one. I only drew the red one. Speaking of the post, can I just point out that I sent a postcard home from Spain and thus far it has not arrived, but we received the postcard I sent from Porto already so that’s 1-0 to Portugal in the postcard wars. Well, last year we sent a card from the Vatican City State which got here super fast, but thirteen months later we are still waiting for the Italian postcard from Rome. 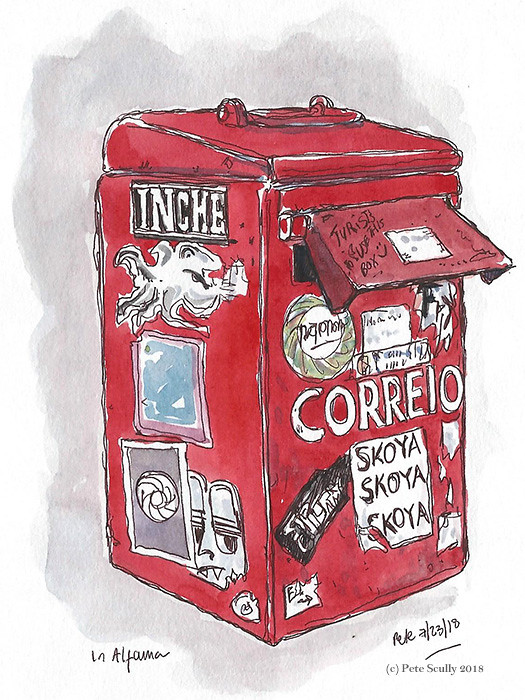 I liked walking around Alfama. There’s so much history around here, it’s hard to believe Lisbon was only built in 1933. Only joking. Actually much of this neighbourhood was apparently spared widespread destruction in the 1755 quake. This was the stronghold of the Moors, but they don’t live there any moor. (Travels with me is an endless series of admittedly excellent puns) Alfama the name is itself Moorish deriving from the Arabic “al-hamma”, which means thermal baths or fountains. Before them, the Visigoths. Before the Visigoths, the Suebi, the Alans (“Ah-Ha!”) and the Vandals (such as our old pal Vinnie Stevens), and before them of course were the Romans, when Lisbon was known as ‘Olisipo’. And before the Romans, it was the Celts who lived here. The area around the Castelo de São Jorge was (it is thought) home to a Celtic fortification, and archaeological excavations even suggest a Phoenician trading post here dating back to around 1200 BC. And before the Phoenicians, there were the Oestrimni, and the Beaker people, the old Bell Beaker culture. And before them, the Neanderthals, living around the Tagus estuary 30,000 years ago or so. I could go on but I’m just not sure which dinosaurs exactly had nesting sites in the Alfama area so perhaps we’ll just carry on our story from here. 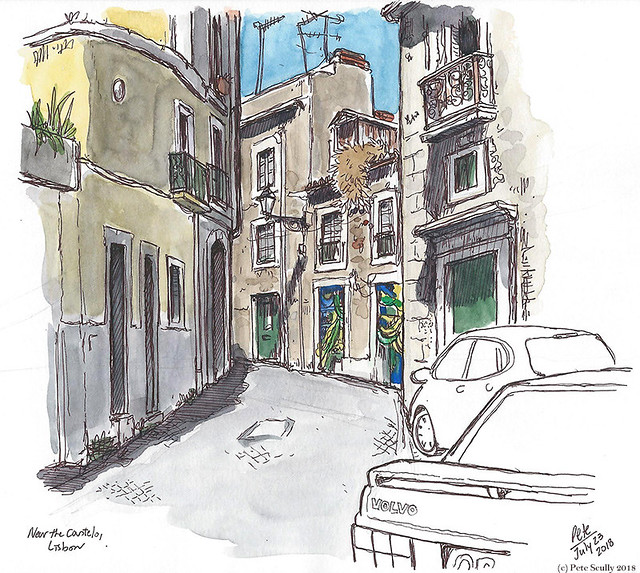 This scene was drawn near the Castelo, in the winding maze of streets around the castle hill. As I was drawing, I (again) bumped into fellow urban sketcher Genine Carvalheira, with her girlfriend. She may have thought I was just one of many Pete clones dotted around Lisbon with sketchbooks (I wish I had access to that sort of technology, can you imagine how many sketches I would get done?). It was a hot afternoon and I stood in the shade. 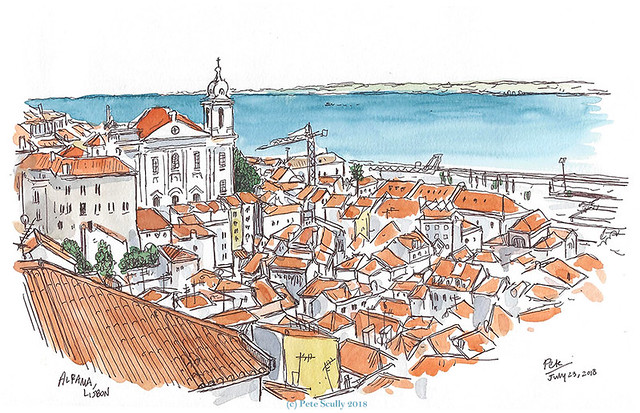 And here is the view from the shady leafy gardens of the Miradouro de Santa Luzia. Those red rooftops of Alfama, that blue Tagus river, it was a gorgeous day in a gorgeous – and very historic – city.

7 thoughts on “lisbon and her histories”