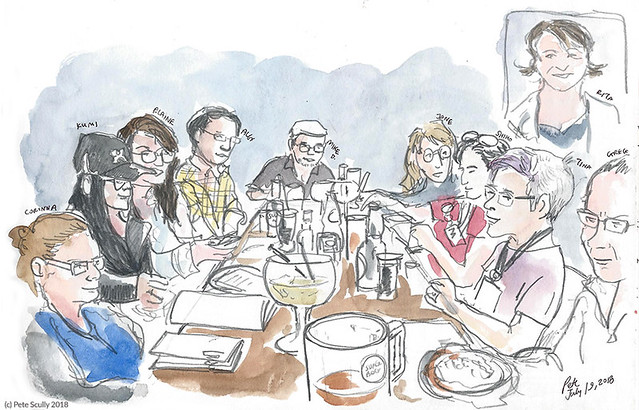 The Symposium always offers a chance to feel ok about drawing people. Everyone is doing it, nobody judges you about how unrealistic it looks, and nobody feels self-conscious about someone sketching them. Well, usually. I mixed up sketching the public with sketching the participants, and tried to keep it fast (far less than the ‘five minutes’ per person!) and tended to stick to pencil, with a bit of watercolour for effect. I used a Palomino pencil that a pal of mine sent me from Japan (cheers Tel), it does wear down fast though, I had to keep sharpening. Pencil moves fast though, so is good for those really quick people sketches. Above, dinner on the Thursday evening with several of my old sketching buddies. You can see Kumi Matsukawa (from Japan), Shiho Nakaza (from Santa Monica) and Rita Sabler (from Portland), all of whom wrote chapters in my 2015 book ‘Creative Sketching Workshop’ and all of whome I met in the 2010 symposium, which is also where I met Mike Daikabura (from Boston), at the end of the table. There’s also Tina Koyama (from Seattle) who of course I have met at other symposia, great to see her again with her partner Greg, and Corinna from Germany, who I did meet briefly in Manchester. Others at the table are Jane (from LA who was in Portland, but I’d never met), and Elaine and Alex, who I didn’t speak to. It was a nice gathering for the “Drink’n’Draw”. The Drink’n’Draw events were generally done at the Ribeira square next to the river, and were generally hundreds of sketchers messed all over the place, so the fact I actually found several sketchers that I already knew was nice. It was a nice evening. 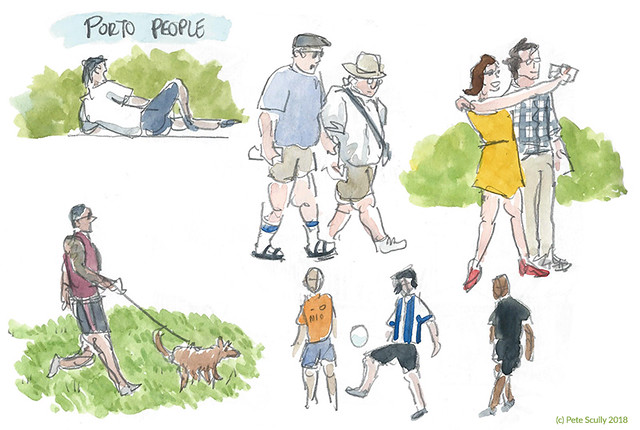 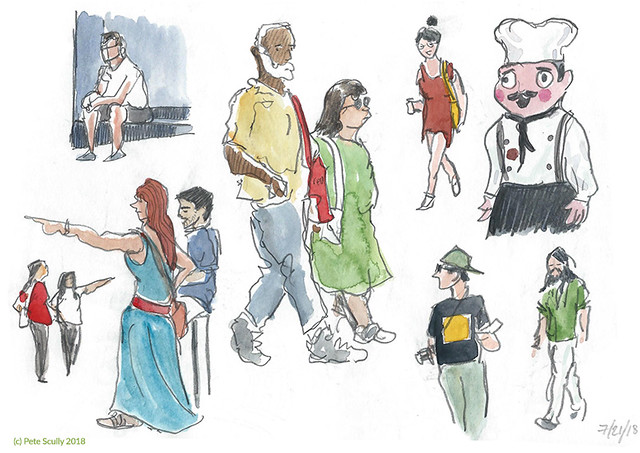 Above, sketching the locals. And the tourists. I stood in a couple of spots and tried to capture people as they passed by. I liked the lads in the Porto kits kicking the ball about up the Alfandega, I kinda wanted to join in. The bizarre looking Chef with the big eyes is actually not a person, nor a Frank Sidebottom mask, but a large figure in the window of a restaurant. Below, some people I sketched while waiting for my Francesinha. 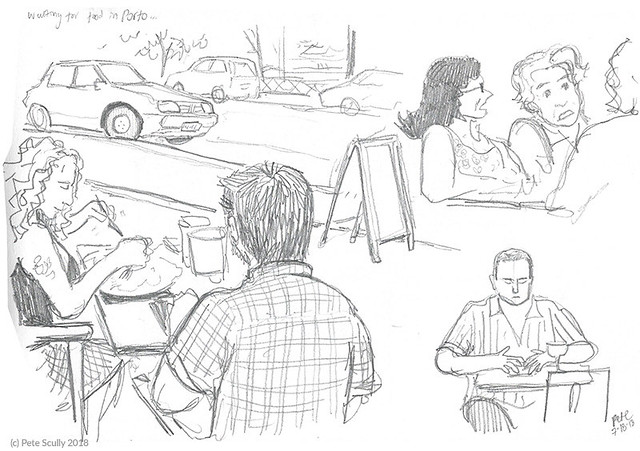 Below, some other locals or maybe tourists, eating dinner at Ribeira. The woman on the right, I might have drawn her head slightly too small. The giveaway is that the person behind her has a larger head. As does the person sitting opposite, who is further away from my POV than she is. Now unless they are wearing Frank Sidebottom heads, I’ve got that wrong. Ah well. 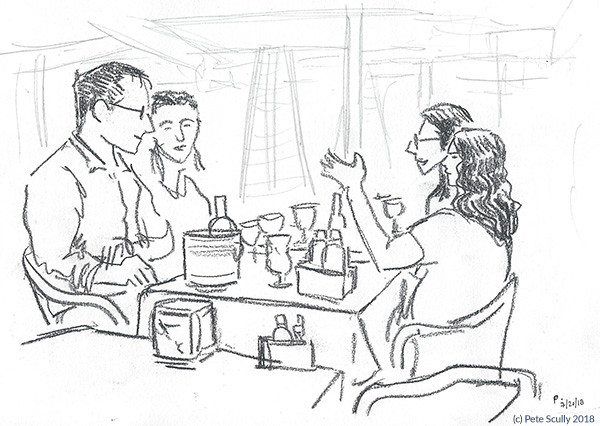 And below, two fellow sketchers I enjoyed a beer with on Friday evening, Aglaia and Joel, both from the US. Joel I had met in the Manchester symposium, he was busy during this one with accounting and money stuff for Urban Sketchers. He’s wearing his red Chicago symposium shirt, from last year’s event (that I missed). Aglaia teaches history at a university, so we had a long discussion about history and what not. At one point they mentioned they had seen the Beatles film A Hard Day’s Night again recently, and asked about the Wilfred Bramble character and why they kept saying he looks ‘very clean’, which is a reference to steptoe and Son that many Americans these days would probably not get, so I got to do an Harry H Corbett impression and say “you dirty old man!” Also I think I may have done a Simon Schama impression or two. A fun evening. 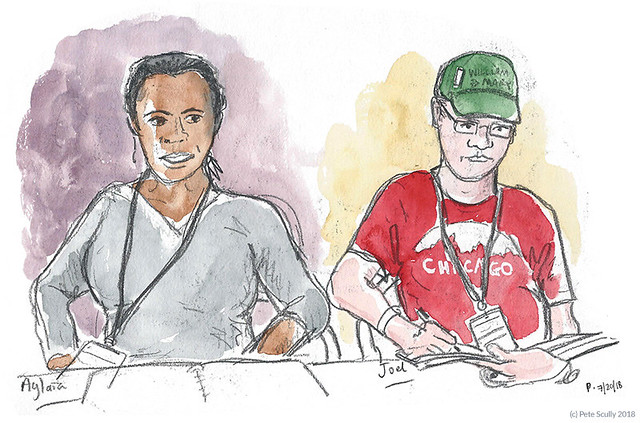