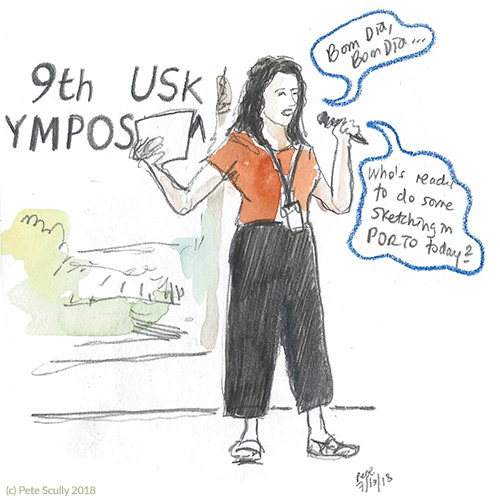 The reason we were all there in Porto was for the 9th Urban Sketching Symposium. “USk Porto 2018” as it is known (see the hashtag #USkPorto2018 on the various platforms) was the largest one yet – 800 registrants, with a similar number descending on Porto just for the ride. Urban Sketchers is quite big now. The first Symposium back in Portland in 2010 (check out my Flickr album, or look at my Portland 2010 blog posts) had less than 80 people, many of whom had only ever met each other online and never in person, and yet we all seemed to get to know each other. The ‘Woodstock of Sketching’ Matthew Brehm called it. With 800 people it was hard enough to find the people you knew! Yet I still managed to meet new people, though for sure, it was a really big crowd. Above, the current Urban Sketchers President, Amber Sausen, sings to the gathered Thursday morning crowd before they set off for their workshops. Below, Amber introduces the Symposium at the Wednesday evening reception. There was a show of hands; over 50% were first-time symposium participants! 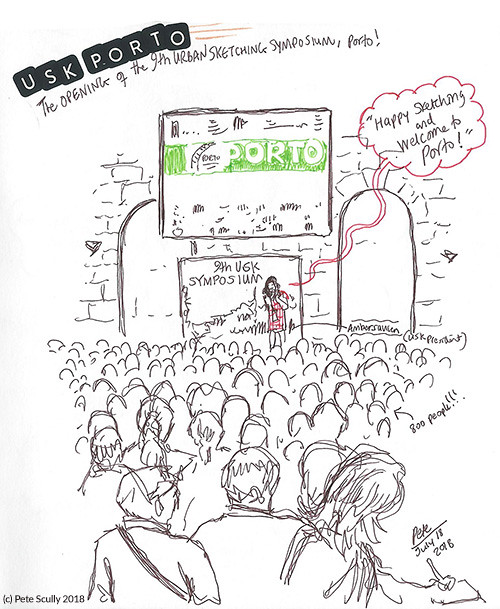 One aspect of the symposium this year were the demos. There have been demos before, but this year we had to sign up upon registration and choose whose demo we wanted to attend. Most were held outside on the streets, in the urban setting, our little groups shepherded by friendly volunteers. I went to the demo of Gabi Campanario, Seattle-based journalist and the founder of Urban Sketchers. I’ve not seen Gabi in person since Lisbon 2011 so it was nice to see him again. He was the one who invited me to be a correspondent on the new blog ‘Urban Sketchers’ when it was first launched, back when it was tiny, so it is great to see a decade later just how big and popular it has become. Gabi’s style of sketching is very particular, he works fast but gets in a lot of information; he sketches for a newspaper after all. I’ve always been in particular impressed with his approach to perspective, and it was this that he helped to demonstrate first. He usually draws fairly small, but sketched on a large pad for the demo so that everyone could see. I drew the group watching and learning. 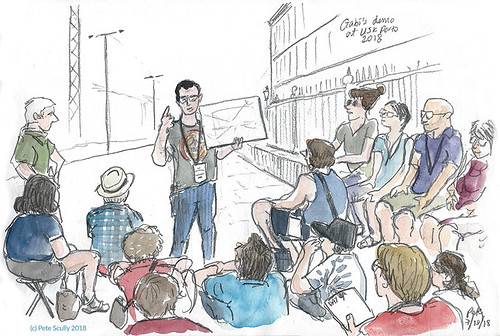 We were on the Alfandega, which has a lot of very interesting vistas to sketch, so Gabi continued his demo by showing us a bit about how to go about composing such a sketch. I like the poses he gives. The demo is very much a performance, a piece of street theatre that is both instructive and interactive. 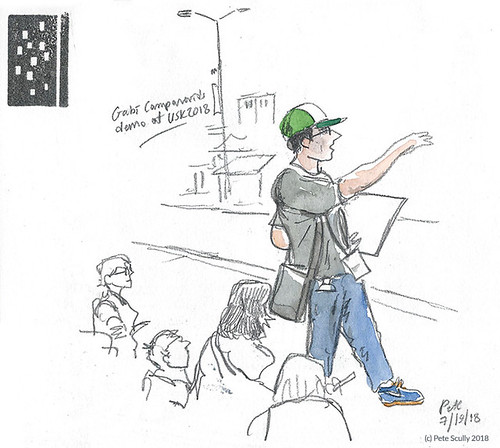 Finally, here is another sketcher, called Paula. I will post more pictures of the other sketchers I drew, though to be honest I don’t feel like I drew enough of the other sketchers this time. There were 800 other participants after all, plus about that many who just joined in the crowds in Porto. I don’t think she minded me sketching her; it’s expected at the symposium, you will be sketched. I’m including this though because she was very much in the act of sketching (actually by this point I think she was checking her phone). I have always wondered about the line between sketching and performance. 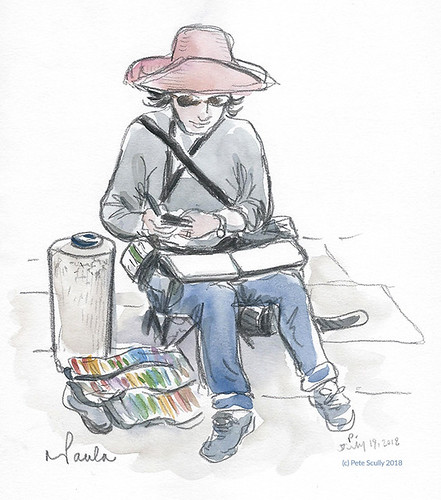 On one hand we are working in our private journals, they are our business and not really anybody else’s. You aren’t under any obligation to show anybody anything you have drawn. On the other hand, there is an unwitting performative element to the urban sketcher. I think it’s one that fascinates the public. This is something that I would love to explore further; years ago I used to do interactive theatre, and so many of the workshops and skills and ideas I picked up in those days have informed my attitude to urban sketching. I really want to explore this somehow. When we as sketchers are out in public, creating art, we are in fact engaging in two kinds of performance art. There is the result, the sketch that we share online (and we usually do, as part of Urban Sketchers). Then there is the act of sketching itself. Once I stopped finding a place to hide when I sketch, I started to lose my fear of being watched while I sketch. Why do people watch? They are fascinated that you are creating something. So many times people will come up and say, oh wow that is beautiful, and I have literally drawn five pencil lines and spent ten minutes squinting up at a building. Is that really the thing that is beautiful, or is it the act of going out and actually trying to draw something that is beautiful? I think it’s more often than not the latter. “Wow, did you draw that?” I know artists who get very upset with that statement; in the early days, I would often imagine sarcastic responses too, and mumble them under my breath, but that’s not what the person is asking. They aren’t asking if you drew that. They are making an exclamation of wonder, often not even of the drawing but of the act of drawing, of the bravery that it takes to attempt the drawing in public, the performance. Honestly I could write a long article on this, and go back to my old drama degree theory stuff, Eric Bentley (A plays B watched by C). It is worth thinking about though, when you are next out sketching, how much of it is personal and how much is public performance, albeit of a quiet kind. If that is the case, USk Porto 2018 was one of the largest pieces of public theatre I’ve been to in ages.