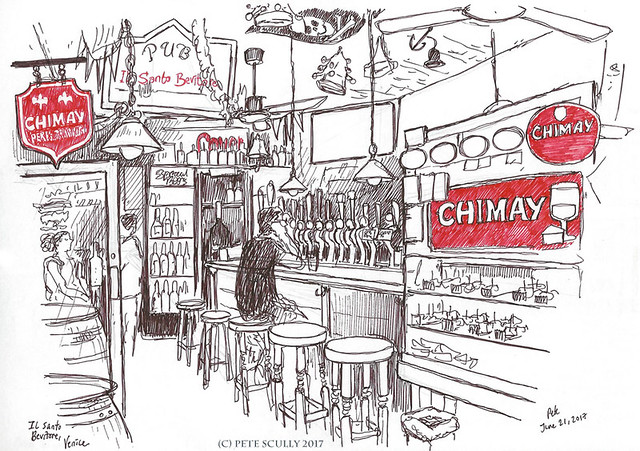 A short two-minute walk from our apartment was a small local bar called Il Santo Bevitore, quietly perched on the canalside, and when everyone fell asleep after a long day’s Italian travel I went for a stroll in the sultry lagoon evening, thick gloops of summer rain plopping down unexpectedly, while the dark water crept up from the canals and over the pathways and into doorways. Venice is no stranger to humidity. My previous visit had been on a baking hot August weekend in 2003, when no end of Fanta Citron could quench my thirst and three or four showers per day were the norm. After a stroll through the dark narrow Venetian streets (I have always felt Venice after-hours to be a bit spooky, I prefer it in daylight, preferably early morning) I stopped into Il Santo Bevitore to have a beer and some of the little Venetian snacks, pieces of bread topped with various foods, fish, cheeses, all sorts of things. This was definitely a bar I wanted to sketch, and I had enough time to do a full sketch with colour, but the fans were not on and they didn’t exactly have air-conditioning, so sweaty-in-Venice I was once again. I probably lost loads of weight in sweat sat sketching in that place. I put some of it back on with those little snacks though, they were so good. I had just the one pint and gave up the sketch, going back to the apartment to cool off by the fan (with a couple more of those little snack things, I wish I remembered their proper name; one that I really liked was called “Baccala’ Mantecato”).

This was the ‘Formaggio Cremoso Rucola’

Venice by night; this was the alley to our apartment