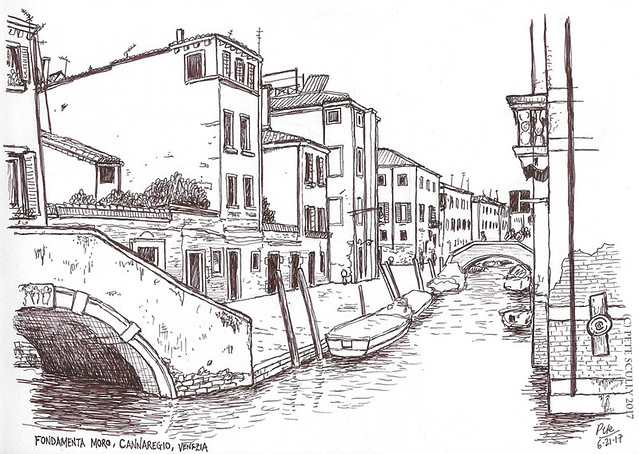 We stayed in Cannaregio, the northern quarter of Venice, a neighbourhood of canals north of the Grand Canal and east of the train station. I kept spelling it Canareggio, which is wrong. I also spelled it Cannareggio, which is also wrong. I never spelled it Canaregio because that just seemed obviously wrong. We arrived on our train from Rome in good time, that trip across the lagoon making the old heart thump around with excitement. We were staying in an apartment we had booked online, and we had the address, and we had even looked for it on maps online, and here is the thing – Venice makes no sense to anyone except Venetians. They don’t have streets, you see. That might seem obviosu, because they have canals, but they literally don’t have streets – what they have are Calles and Fondamenti and Campi, but if you have an address it’s not like, 52 Gondola Road, Venice. Instead each address is a number, followed by the name of the area. For example, the address of the church Madonna dell’Orto is Cannaregio 3512. It’s a bit like saying you live in “Willesden 4586” without giving any street name or other distinguishing feature – people just know where it is, and to locals it makes a lot of sense. To the outsider however, it can be very confusing, and Venice is like a labyrinth anyway. In fact, while all those Calles and Fondamenti have big signs letting you know at least vaguely where you are, it turns out those were added by the Austrians years ago to stop themselves getting lost, Venetians had never needed them. 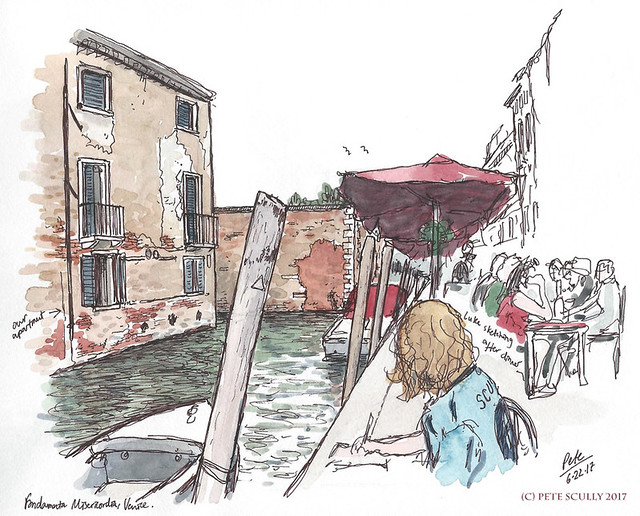 What I am saying is, yes we totally got lost trying to find the place. ‘Fondamenta Moro’ is also very similar sounding to ‘Fondamenta dei Mori’, two canals over. We hadn’t been to Venice in 14 years and I think had forgotten how much it can turn you around. We got there in the end, and it was a nice neighbourhood not too far from Strada Nuova, which actually is more of a street and has a good supermarket for stocking up on supplies (dio mio, I love Italian food!). It was an apartment we reached through a dark and slightly slanted covered alleyway, and the narrow canals were right outside our windows, boats and gondolas drifting by quietly. It was a world away from the Rome apartment with its spectacular view and exhausting staircase, but peaceful and homely, with a row of canalside restaurants and gelaterias nearby. The top sketch was done out the front of the building, stood by the bridge in the early evening, Venice at its most serene. The sketch in color above was done at dinner, and you can see the back of our apartment on the corner of the building’s ground floor. That’s my son, sketching a boat. We ate at the Trattoria Misericordia, and the food was decent (not as good as Rome but pretty good), but the waiter fancied himself as some sort of comedian, but came across as, well, not a comedian anyway. We ate while the sun cast long yellow streaks in the sky and then walked home across the bridge. 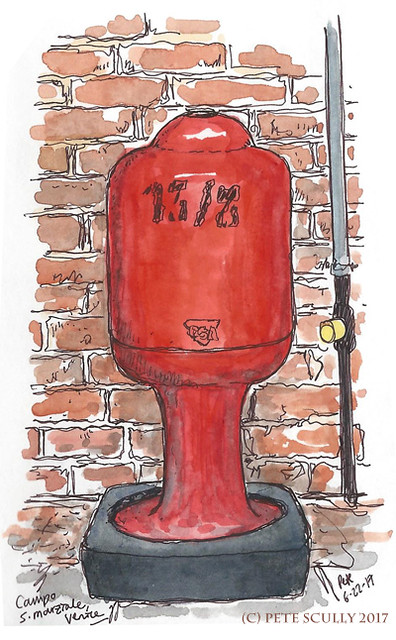 Cannaregio means ‘Royal Canal’, as it was the main route into the city before the railways were built across the lagoon. These days it is the northernmost of the ‘Sestieri’, the six areas of Venice. Above, a Venetian fire hydrant, covered up like those ones I drew in Lisbon years ago, remember? Now it isn’t the exact same one as below, which was nearby on the Campiello Diedo, but I thought you might like to see it because it is quite similar in many respects.