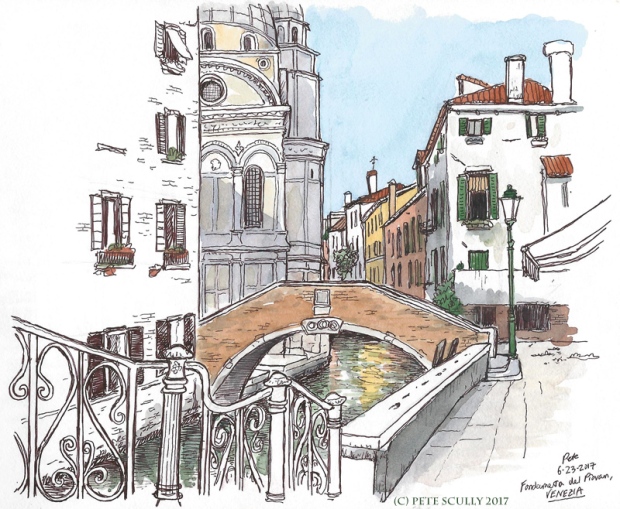 I wonder what my Venice ‘limit’ is? How long could I be in Venice before I got bored by the bridges, confounded by the canals, tired of the tourists, frustrated by the flooding, and hounded by the humidity? Maybe never, and maybe always? Maybe all of that is the charm of Venice, and maybe it is something I don’t notice when by myself but becomes more prominent when with others? It’s hard to tell. I’ll always love Venice, always be amazed by its very existence and history, that is is an eternally crumbling yet living and breathing beauty? I could spend a long time there wandering and sketching, but even Venice would end up feeling small and familiar. Other cities may not be as pound-for-pound beautiful, but may have a more lasting attraction – Paris, for example. Over the course of three days however Venice is magnificent and divine, and every scene is a potential watercolour. The morning light in Venice beats everywhere I have ever been. The sketch above was done on my second morning in Venice, while wandering about the narrow paths of the sestiere of Cannaregio, looking for a specific spot which I knew to be nearby the place we stayed in 2003. I found it – the shiny marble church known as Chiesa di Santa Maria dei Miracoli, which I remembered to be surrounded by cats the first time I saw it. There were no cats this time. I sat on the steps of a bridge on the Fondamenta del Piovan and sketched the above scene, painting the colourful reflection in the soft morning light, before wandering back to the apartment, Venetian breakfast pastries in hand. 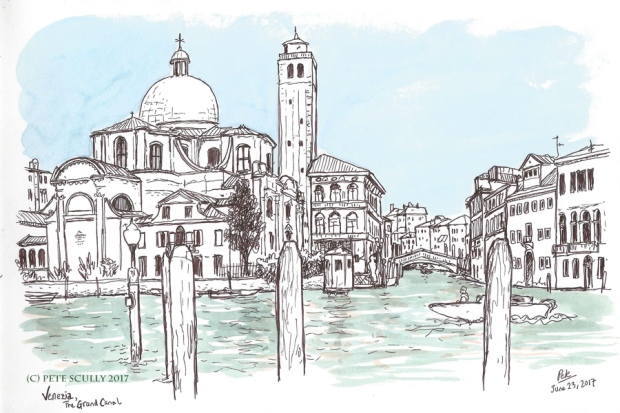 Later that day, we had a morning and afternoon of slow wandering around the two sestieri on the other side of the Grand Canal, San Polo and Santa Croce. We took a traghetto over, looking for the natural history museum, but spent ages getting lost among the alleys and courtyards. This was a much more residential area than I had expected, and while we were lost (because we were a bit lost, we never found that museum) my son watched local kids playing football in the small squares (though he was a bit shy to join in). I did get one sketch done, looking for a route to the Grand Canal, sketching the magnificently domed Chiesa di San Geremia across the wide turquoise canal. Scenes like this make Venice feel like a made-up city, a pretend place, but it’s very real, and boatmen moored up bringing their goods onto the fondamenta. This was actually my last sketch in Venice and tired feet were not looking forward to the journey back to England, but we were all ready to come back by that point. Venice is beautiful and fun, as is Rome, but there is a lot of walking. Our next vacation will involve a little more beach and pool. 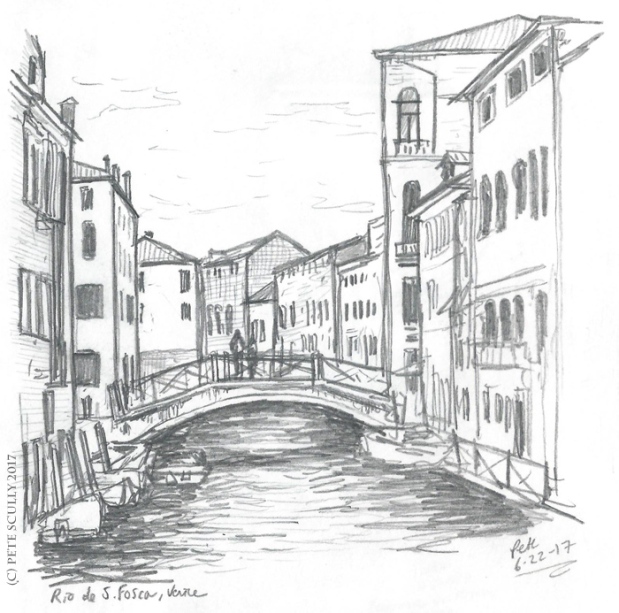 One last sketch though, a quick pencil sketch of the Rio de S. Fosca, in Cannaregio, drawn quickly the evening before, after dinner. I didn’t want to be out sketching after dark so drew this as the sun set and went back to settle into the apartment with thoughts of future Italian trips in my head. Next time, Florence, Tuscany, and maybe the Italian Lakes. I’d like to visit the Ligurian coast, all the way down to the Cinqueterre. Genoa has always sounded interesting to me, and Bologna. Naples scares me a bit, but I had a pen-pal from Naples when I was about 13 (we never met, but she would write to me all about the south of Italy, and I’d write back all about London). Similarly, Sicily always seemed wild and distant, but I would love to explore its villages and coastal towns. I don’t know; I want to go everywhere, I guess. At least we were able to go to Rome and Venice, and that was worth it. Arrivederci Italia. Ciao! 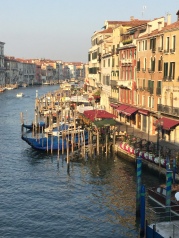 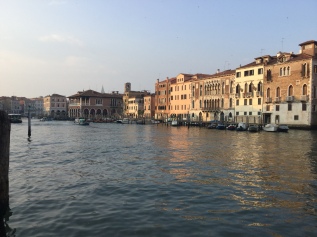 2 thoughts on “sense and serenissima”