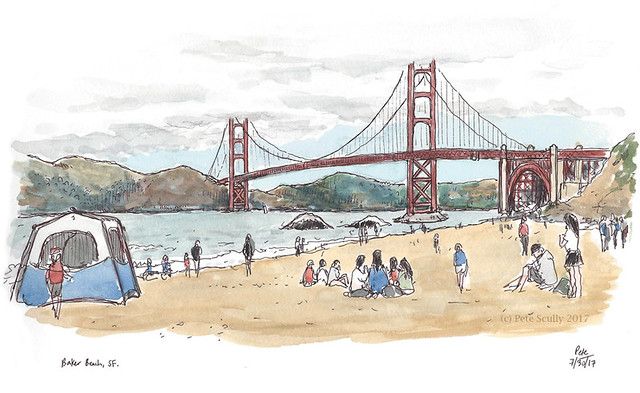 Summers in Davis, California are ridiculously hot. I know that to you back in Blighty that means little comfort while you have the usual soggy British summertime, but it’s honestly too hot in Davis. Oh it’s a ‘dry heat’ which means you don’t sweat constantly, as we do when it gets hot in London, but still it’s too hot to do anything. You don’t want to leave the cool air-conditioned house, which can then make you go stir-crazy. Davis is too hot. The first summer I had in Davis back in 2006 was so hot that air-conditioning units crashed the local power grids several times; though ours was fine, many people in Davis would escape the hot evenings and go to the bookshop I was working in, just to cool off. Even my nice office was not immune during the day – the power would go down, and the building would gradually heat up, until everyone was just sent home. Davis summers don’t see as many power outages these days (usually they happen during storms now) but the summers are still ridiculous, and our PG&E bills certainly reflect that. However there is one way to beat the heat – get out of town and drive west to the San Francisco Bay Area. That first summer, it was on a Davis day of 115 degrees Fahrenheit that I first realized how different our climates were, the Central Valley and the Bay Area – on that day it was around 65 – 70 degrees in Berkeley. Quite a difference. And so, a few weeks ago, we decided to leave the boredom and heat and drove one Sunday down to Baker Beach in San Francisco, where the air was cool and the sky was blanketed with fog. Yes in California we leave the sunshine and heat and head to the coast to cool off beneath overcast skies and this is normal – I truly have moved across the world, and found my people. There we all were enjoying the foggy skies, in full view of the magnificent Golden Gate Bridge – full view, except for the top, obscured by rolling waves of fog. It was heaven. Of course, those harmful rays can easily get through that fog (I only ever get sunburnt in San Francisco, it’s deceptive) so we were still lathered in sun-screen. We hung out at the beach for a few hours until we got hungry for cheesecake, and then attempted to drive home. That took a very, very long time. First of all, we left the beach at 3:30pm, but did not reach the Golden Gate Bridge until 5pm, and you can see how near it is. Traffic was completely stuck. Over the bridge we stopped for dinner at the Cheesecake Factory, hoping the traffic would ease off, but it didn’t – after another long wait in unmoving traffic we abandoned all hope of crossing the Richmond – San Rafael bridge, and headed north to sit in more traffic along Highway 37. We weren’t home until 9pm, five and a half long hours later. And of course, Davis was still hot. So it is worth it to get out of town and cool down, but you might end up in a car for a very long time.

4 thoughts on “cooling off at baker beach”