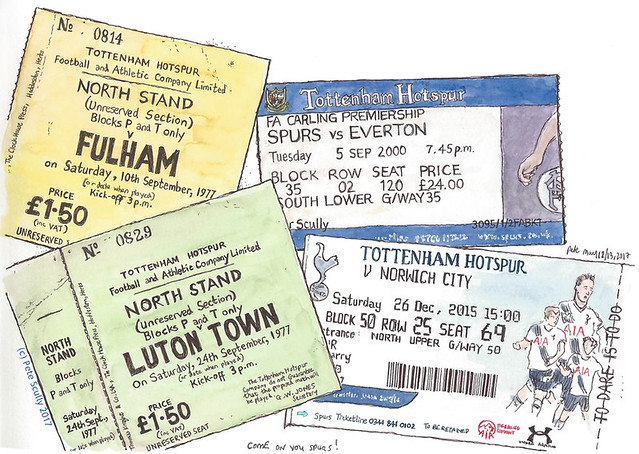 I’m so sad. My beloved team, Tottenham Hotspur, are playing at their home White Hart Lane for the very last time. Kick-off against Manchester Untied is in about an hour, a selection of my many Spurs shirts are hanging around the living room, and my head is in all the memories from down the years. Tottenham have played at White Hart Lane since 1899, but we need a big upgrade, so we are moving to Wembley Stadium for a year (“Spurs are on their way to Wembley…”, Ossie’s Dream is one of my favourite songs), while the new stadium is being finished. The new stadium is actually on the site of White Hart Lane so we’re not really moving permanent location, but the ground is just next door, currently being built, about the swallow the old ground within like a giant Pac-Man. The old Paxton Road North Stand is where the new South Stand will be in the new stadium; I wonder if we’ll still refer to it as the Paxton end?

I love being a Spurs fan right now. We’ve had a lot of lean years since the 1990s, but the past decade we have been building a much better consistency and this year in particular we’ve been better than any time in my life. It’s just, Chelsea were a bit better, so they won the title on Friday. We have thus far gone the entire season unbeaten at The Lane (first time since the mid-sixties), and I really hope that record continues today against Manchester United. I don’t think it will, I think the occasion and the fact we are mathematically unable to catch Chelsea will have an effect on the players but that’s just me being an experienced Spurs fan. We have been incredible this year (and finally came above Arsenal, confirmed with a 2-0 victory in the last North London Derby at The Lane – I wish that had been the stadium’s Finale!).

I drew these tickets that I have lying around at home. The newest was from a game I went to with my older brother John, nephew Leo, and son Luke; my final game. the one above was from a game against Everton that I went to with my mate Terry in 2000. The other two aren’t mine, I think they were my brother’s. It’s through my big brother that I became a Spurs fan. The early 80s had Ossie Ardiles, Glenn Hoddle, Steve Archibald, Garth Crooks, Ricky Villa, my heroes. “When I grow up, I want to be Ossie Ardiles” I wrote once at school. My brother took me to my first game at the Lane in 1983, a 2-1 defeat to Everton (Mark Falco scored for us, Johnny missed it because he went to the toilet). I will never ever forget the first time, approaching the ground, the long walk up Tottenham High Road from Seven Sisters tube station, hearing the crowd roar as the Lane comes into view, but its emerging from the tunnel, seeing the green of the pitch, the sound of the thousands of fans (the swearing, the songs about Arsenal…), the players I’d only seen on TV or in football magazines actually there moving about in front of me; it was like magic. It never really stopped being like that either, every time I would go. I do love a football stadium, but none more than The Lane. My brother used to go to every game (ever-present in 80-81 and 81-82)  and started taking me, but we couldn’t afford to go too often; I do remember one game, an evening cup match against Birmingham, we turned up late to see if we could just be let in, but the only places left were in the member’s area, so Johnny spent his last few quid getting us memberships so we could get in (Spurs beat Birmingham 5-0). Because we got membership that year (I was a Junior Member, got all the fun stuff in the post), we were able to go to the FA Cup Final at Wembley (my first Wembley experience; we lost 3-2 to Coventry, I was devastated). We went a few times that year though, 86-87, watching Clive Allen score a bunch of goals. The years of Lineker and Gascoigne came, followed by the Sheringham, Anderton, Barmby, Klinsmann years, followed by some truly pants seasons with the likes of Ramon Vega and Sergiy Rebrov turning out for us. I would only go once every couple of years, tickets being pricey for my meagre budget and always selling out. The stadium changed a lot though – while I’m sad about the departure, the stadium looks totally different from when I was a kid (the North and South stands used to be much smaller, and back then we had standing on the Shelf and big barriers; I spent a lot of time on the shoulders of taller fans!). Since we moved out here to America I’ve been to a couple of games on trips back, to make sure my son got to experience The Lane, seeing Harry Kane, Dele Alli, Hugo Lloris, before we inevitably moved into a 21st Century ground. That will come, we hope, in 2018. It’s still “at” White Hart Lane, you still go to exactly the same place to get there, but it will be different. One corner has already been taken down; the rest starts coming down tomorrow. We will always be Tottenham, Super Tottenham, We are Tottenham, FROM THE LANE.

Goodbye White Hart Lane! Thanks for all the memories! COME ON YOU SPURS!