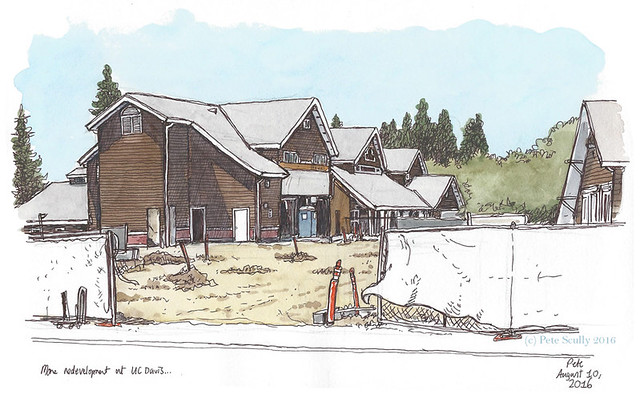 Well, what else has been going on on the UC Davis campus this summer? Building work, hot days, Delta breezes, summer sessions classes, and lunchtime drawings in a post-Manchester-symposium sketching-energy spike. Actually more of a pre-UC Davis-Design-Museum-Sketchbook-Exhibition sketching sketching-energy spike. Yes, my sketchbook exhibit is opening next month, it will be called “Conversations with the City” and will run at the Design Museum in Cruess Hall from September 19 to November 13. So exciting! See http://arts.ucdavis.edu/exhibition/conversations-city-pete-scully-urban-sketcher for more details. I will be displaying sketchbooks ranging from 2006 to 2016. The exhibit is Curated by James Housefield and Tim McNeil of the UC Davis Design Department, and I will also be giving a talk about my urban sketching work (and why you should keep a sketchbook) on Thursday October 6th, from 6-8pm. I will place an announcement in the sidebar on my website, but if you are in Davis then do come by!

In the meantime…here are some recent sketches of UC Davis. Above, the South Silo, undergoing a major refurbishment and upgrade of that whole area. New eateries will be going in, the paths will be widened to create a new vista, already we have seen some big improvements (despite the removal of an old funny-shaped tree, which was kind of in the way – it’s easier to cycle around Bainer now). You can see the oft-sketched Bike Barn there too on the right. It will be fun to see how different it all looks here. Below, part of the same building, still functioning despite the big renovations next door, the UC Davis Craft Center. I drew it one lunchtime before taking a Diversity training class in the building opposite. I added the paint later on.Not a lot of shaded spots to sketch this view from but I stood beneath a small tree. 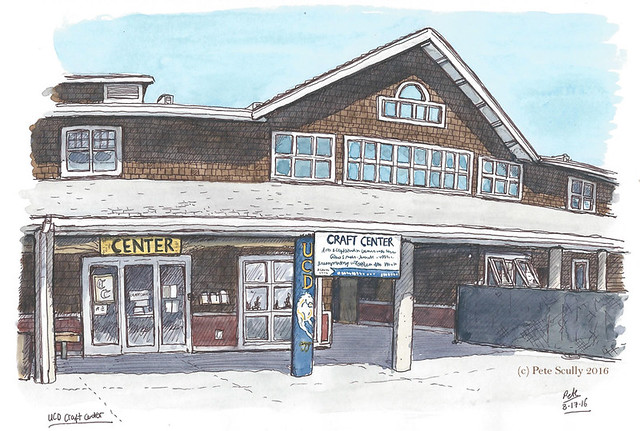 Below is Nelson Hall, which is home to the Della Davidson Performance Studio. It’s on Old Davis Road, next to the Arboretum, and this used to be called the University Club. Last time I was in here was during the UC Davis Centenary celebrations (2008-09); in fact I took my new staff orientation here a decade ago. I’ve been on campus a long time now. I always felt like these little snapshots of Davis were my ‘postcards’ being sent back to those I left in England, so they can see where I live now. After almost eleven years in California there have been a lot of these postcards… 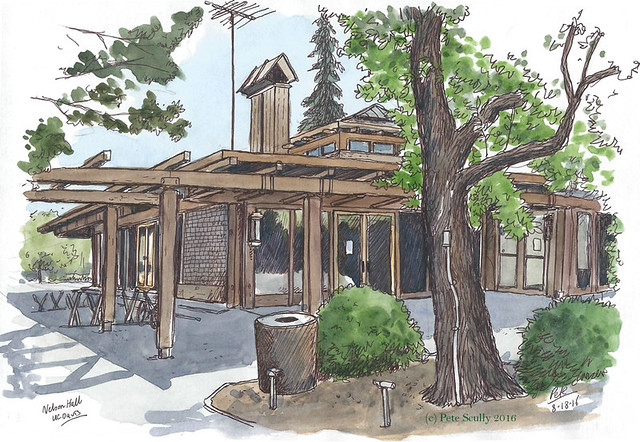 This building below has been on campus a lot longer: TB9, aka Temporary Building #9. It’s long been an arts studio and home to decades of ceramicists such as Robert Arneson. Fun story, first ever sketchcrawl I did in Davis (Dec 2005) I ended up outside here, sketching sculptures in the back yard area. Recently, TB9 was placed on the National Register of Historic Places – see the news announcement – due to its importance in art history. About time I sketched it properly then huh! It is right next to the Pitzer Center so has cropped up in the background a few times. With the Pitzer Center no longer being a big closed off construction site I was able to get stand off the road and get a better view without being run over by trucks. 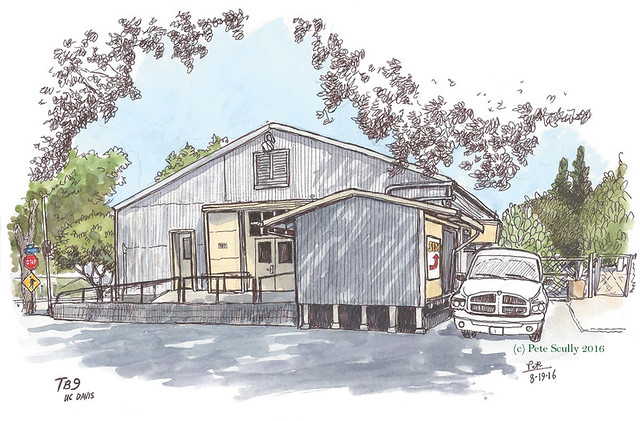 Even older still is Wyatt Pavilion Theatre, below, a decent-sized performance hall built in 1907 (that’s right, 1907! Here is some history and info). I came and saw a play here a few years ago, Richard III; I really should go and see more theatre. I do have a degree in Drama you know. Ah that explains a lot I hear you say. Well it was French and Drama if you must know. I actually did a fair bit of foreign language acting when I was at college, though usually in German. Acting in German is way more fun; you get to do Brecht! 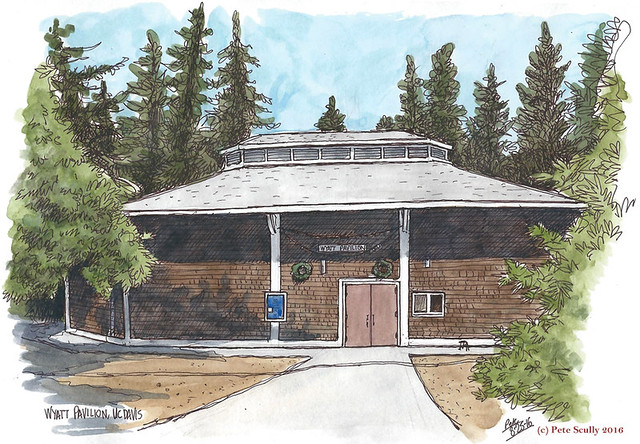 See that blue poster on the wall of the Wyatt? That is actually advertising my exhibition! Among other things, my that is at the top, which is exciting. So anyway, come and see my “Conversations with the City” when it opens, and take a peak at my sketchbooks. I hope you like it.

2 thoughts on “answers on a postcard”