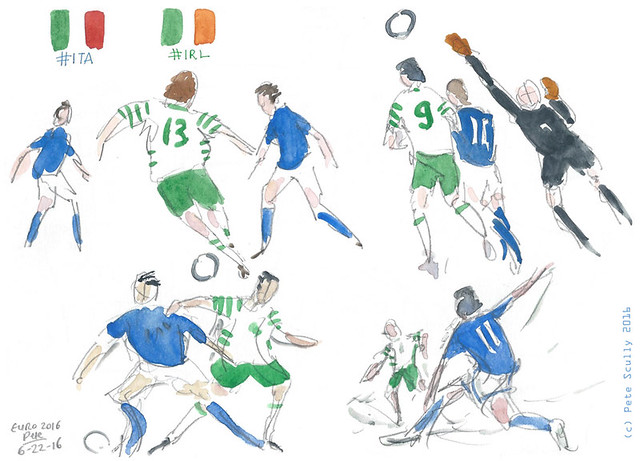 I love this Euro 2016 football tournament. I love Europe in general, let me be clear about that – I was born European, and will remain European. The EU referendum news is fresh, new and bitter – and Cameron just resigned a few minutes ago – so to cheer you up again, I’ll bring it back to the football. I’ve often been frustrated by the European Football Championships, the less fun little brother of the World Cup. Perhaps it was the Years of Hurt – as a fan of both Ireland and, yeah, England disappointment went hand in hand. I still have a celebratory t-shirt from the famous Ireland victory over England back in 1988 (“These boys made history” it read, my mum got it for me from the Irish festival in Willesden Green). Despite some World Cup fun times since, the Republic of Ireland have either not qualified or just been rubbish at the Euros. England, well, Euro 96 was a fun ride, with a depressing end. These Euros have seen Wales, England, Northern Ireland and now the Republic of Ireland qualify for the knockout stages in dramatic fashion. Kind of pales into insignificance now with the political earthquake of “Brexit”, but while the two final group matches played yesterday lunchtime I sketched them both simultaneously (I do love split-screen). Ireland beat Italy 1-0 with a late winner, and I leapt off my seat, fist pumping. Even the Italians celebrated with the Irish. Both Ireland teams in the next round! Wales and England too! And Iceland, who are close enough to Scotland! Another of the teams I like, Belgium (I lived there for a year, during Euro 2000 funnily enough, I lived opposite the stadium where England beat Germany) beat Sweden, and I sketched some of them to, Belgium in their cool away kit. The outcome was finely balanced, but Belgium scored about 20 seconds before the Irish did, and suddenly Zlatan Ibrahimovic’s international career was over. There he is there, looking rather like a comic villain, Dick Dastardly but without the evil smirk. At least he wasn’t throwing on-pitch tantrums like Ronaldo was (though at least Ronaldo looked more like he cared, and scored a couple of goals out of it – not free kicks, of course). Zlatan has left the building – “Zlexit”, as I’m calling it. 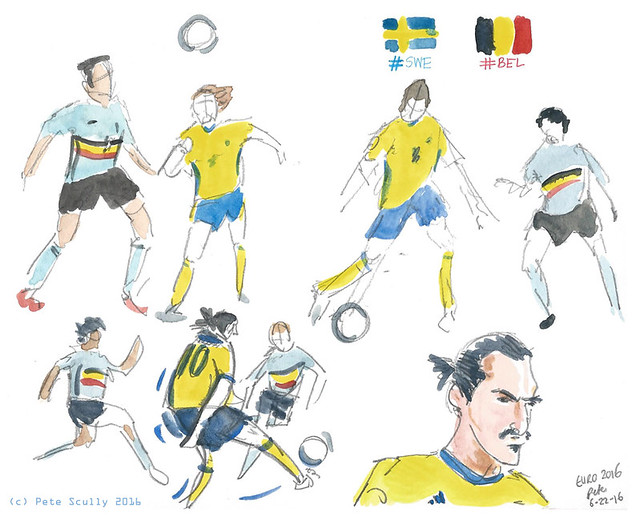 I sketched these partly for practice. I just finished writing a book about sketching people in five minutes (coming out in the Fall!) and one section is about sketching people playing sports, live, so these are my efforts. There’s no football tomorrow, either. Well it’s already tomorrow now. But two days without football, just as all these teams celebrate staying in Europe, and what goes and happens? It all starts up again on Saturday – Wales v Northern Ireland! – and then the big one for Ireland against France on Sunday (6am wake-up for me), with England v Iceland on Monday. Allez les Euros.

8 thoughts on “how to stay in europe”