Euro 2016 has begun! While the British hold a referendum on whether to leave Europe (‘Brexit’ is such a stupid contraction by the way, and concept too), most of its constituent countries (except for, er, Scotland) are going to be spending the next few weeks trying to stay in. For those who aren’t aware, the European Football Championships are taking place in France as of today. I love it. We already have our Panini sticker album, I’ve made a wallchart, my son and I have made paper mosaic flags and hung them up on the wall, and now it’s time for me to start looking at the kits. I’ll do this over the tournament, but post them by group – A and B first, then, yeah. You might remember I did a similar thing for the last World Cup. All of these are made with old-school MS Paint, except for those with complicated gradients, where I’ve used Photoshop to create it and exported it into Paint. MS Paint is still awesome. And so let’s begin! Disclaimer: this is a fairly long and wordy post that makes little to no reference to the actual football and is of no interest whatsoever.

The host nation. My tip to win it (sorry France, you won’t win it now, I’m never right). I have the last French shirt, I wear it all the time, and this one is nice enough, but nothing special. Two shades of blue, and then for some reason, blue shorts instead of white. Come on UEFA. The away kit looks nice but those different colour arms will look a bit annoying after a while. So France, I lived there for a year, and back then they were the world champions (they never ever mentioned it ever, never came up), but I’ve got a lot of love for France. I met my wife there. I remember watching the 98 World Cup there, particularly the Brazil-Holland semi-final in the Place de l’Hotel de Ville. I read “France Football” (or used to when I could get it). Strasbourg is one of my favourite cities in the world. I had a nice few days there last summer with the French Urban Sketchers. I speak French, albeit terribly badly. For all my French friends, for all the stuff France has dealt with these past couple of years, I hope they win it. Well if Ireland don’t, or Northern Ireland. Or Wales. Belgium would be nice too. England too I suppose. But otherwise, Johnny Halliday, “Allez les Bleus!”

Albania, sorry I don’t know how they got in here, of course Albania aren’t playing at the Euros. What? They are? Albania? Yes, it’s true. And Iceland, and Wales, and all these other teams who you don’t normally see at these tournaments (like Scotland, no hang on). Good luck to them, they have a few good players, like that one guy, who plays for, you know, that team. I remember Celtic had an Albanian player years ago. I don’t know any Albanian players I’m afraid, except that one who plays for Switzerland. Anyway…the kit (and they have three, one for each match they’ll play probably), it’s pretty smart, has a graphic meant to resemble the two-headed eagle. I met a woman from Albania once many years ago in a pub, “oh you’re from Albania, ah right. I met a waiter at a restaurant from there once.” That was pretty much the entire conversation. I know one word in Albanian, which I cannot pronounce, which means hello I think.

The all-yellow of Romania, that was so exciting back in USA 94 wasn’t it, the years of Hagi, they were great in the 90s. They switched to red shirts for a while, but are back in the all yellow now which for me is their thing. Joma do a nice kit too, they make this year’s Sampdoria shirt that I own. How will Romania do? No idea. To be honest I’ve not really followed international football lately, I don’t even like it. I like the kits. I like talking about the kits, rather, or how I don’t like the kits. They have Chiriches who was utterly useless for Spurs but is supposed to be decent (sorry Vlad). I’ve never been to Romania but my mum worked with a Romanian guy when I was a kid, Ovidio, had who escaped Ceaucescu.

Switzerland are always decent, they have a lot of handy players and while they won’t win it, they might do alright. I like Switzerland the country, been there a few times when I was a younger man, and I love their chocolate. Remember when the current England manager Roy Hodgson used to manage them? My favourite Swiss manager was Christian Gross, who was utterly useless for Spurs (sorry Christian) back when we had a Swiss defender called Ramon Vega, also utterly useless for Spurs (sorry Ramon) (though he got a fair few goals). Right, sorry, the kits. Nice enough but looks like Arsenal. Away kit is nice though people might think they are ambulances. Hey, once I went to St. Gallen in Switzerland, to the Abbey library, and read the ‘Abrogans’, an original 1200 year old manuscript which is actually the oldest thing in the German language. I held it in my hands. As they say, “Dude”.

Let’s get this out of the way – I actually like the shirt. Everything is a bit wrong with this kit, but the shirt by itself, actually one of the nicest ones they’ve had lately. I know, you’re thinking, “you know nothing Jon Snow”. But even with those unnecessary little blue stripes it looks…fine. The white shorts though I don’t like, and red socks, just go home Nike, you’re drunk. Same with the all red away except socks, which is just wrong. Brimming in wrongability. England, I’ve been there yes, well I was born there, spent most of the first 30 years of my life there, go back every year, sometimes more than once. My family are all there. I speak English, better than I speak any other language. I like their chocolate too. But this year, some of Spurs’s amazing and totally opposite of useless are in the team – Kane, Alli, Dier, Rose, Walker. So for those guys, Pete’s heroes, I hope they do well. Just get some blue shorts, dammit!

Russia. From Russia with Love. Home kit is dark red and gold, meant to be like the old Soviet kits, while the away kit is like Russian kits from the 90s and 00s. Also, Adidas, can I just say thank you for starting to put the stripes down the sides instead of the shoulders and sleeves? Classy move. They have done it before, but I like it. The three stripe shoulder motif was getting so boring, it needs cupboarding for a while. Right, Russia. Are they any good? I literally have no idea. They will want to do well before their World Cup in two years though. They won’t win the cup though.

I went to Slovakia in 1998 for literally an hour. It wasn’t a layover, I actually went to visit. I was in Vienna, and took a quick train to Bratislava. I say quick, the train stopped at the border and you had to get a bus. It was hot, sticky, and I really didn’t see much when I got there. The bus took so long that I didn’t have time to go and explore, and was a bit afraid of getting lost. I changed up 10 Deutschmarks – about $5 – and got back a wad of notes so big I could have wallpapered a shed. I bought a bar of chocolate which melted away upon contact, looked at my watch, and had to jump back on the bus to Vienna, completely confused. One day I will go back, as I know it is very pretty, but I’ll need more than an hour. As for the Slovakian kit, meh. One of those boring Puma all white templates with the Puma sign in the middle. The away kit at least has some vaguely interesting details.

I’M SO EXCITED ABOUT WALES!!!!! Honestly, I’ve waited years for the Welsh to get to a major tournament. All those great legends from the past, Giggs, Rush, Speed, Elvis Criddlington (ok maybe not him), all missed out, but now…BALE. I’m so stoked for Bale’s success post-Spurs and would love it, just love it if he took the Welsh all the way in this tournament. I have no personal connection to Wales, no Welsh family, I have never been there and have only met a few Welsh people in my life but it’s Wales dude! As Ali G famously said, Wales is only 400 miles from England. Actually I had a history teacher when I was 17 who was Welsh but he left teaching to become a pop star with his Welsh-language band called, er, “Ian Rush”. This is not made up.Their kit is an old school Adidas outfit like what they would have worn in the early 80s when Rushie was the goal monster, while the away kit is HOLY TOM JONES grey and dark grey with lime green trim? Dear UEFA, and your love of all-white away kits, Wales are in town now and they will do what they like. I cannot wait.

Join me again sometime for Groups C and D, then E and F. 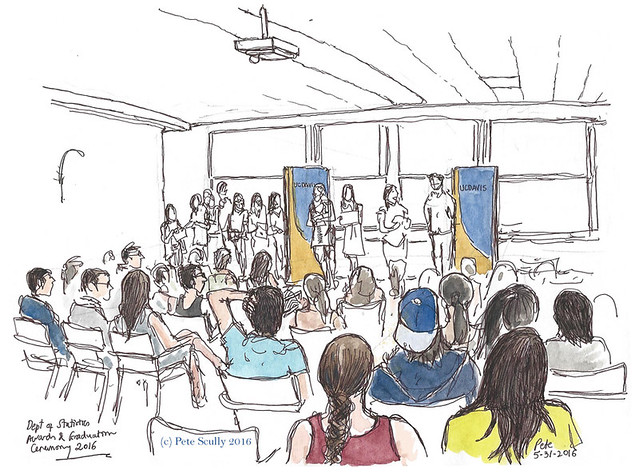 Here in the world of academia, this week is graduation week. Thousands of students undergrad and graduate receive their hard-earned degrees this week and step out into the world. In our department at UC Davis we held a special awards and graduation ceremony a week before the official commencement, honoring our young statisticians and biostatisticians. I did a couple of sketches at the event, but mostly got award certificates ready and took photos and applauded enthusiastically. Great job, everyone! 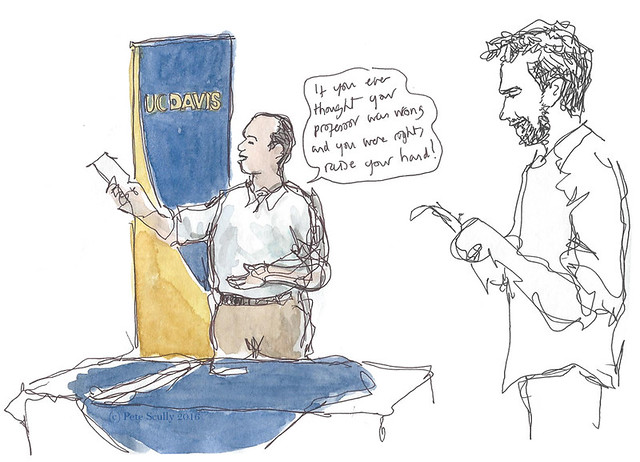 And a few days later, on by far the hottest day of the year, we held our annual Spring Picnic, and I did this one sketch below. The banner is part of a poster I had made to advertise the event. It was really, really hot, but we had a good turnout, and it was a nice way to round off the year. And so, on towards summer… 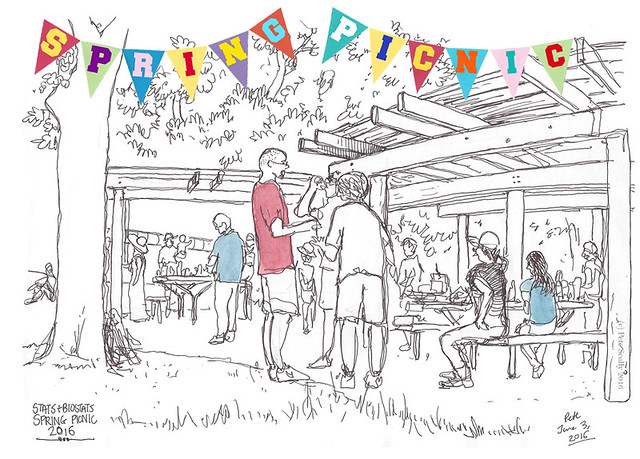