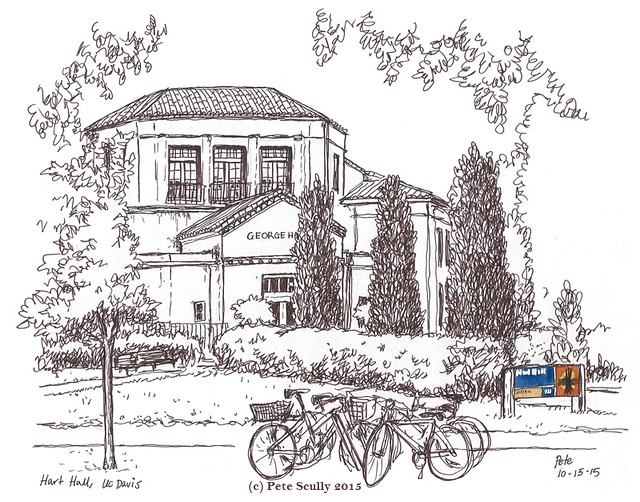 Hart Hall has a new sign. I have sketched this building many times, so this is a bit like telling an older joke that I have told before but with a slightly new twist. I’m all for that as you know. Maybe new people heard that joke for the first time and laughed. Maybe the same people heard it again and laughed again. Maybe nobody laughed at all, either because it wasn’t funny or because they just didn’t get it? Maybe I need to tell it again and again until people do get it. Well it’s the same with drawing Hart Hall (sort of), but this time there is an added detail, the new sign, coloured in to show it off. I like these new signs on campus. It took more than three years to get our new sign and it looks nice, nicer than the old plain orange one. Hart Hall. I used to have a drama teacher called Mr. Hart, he was not a fan of my jokes let me tell you. Once he angrily stopped a performance I was doing in class, in which I played a pretty spot-on and (I felt) serious performance as a down-and-out, just because when another character asked me my name I had said it was “Freddy Reddy”. I know people called Reddy! And Treddy! Ok maybe not Freddy Reddy but it’s not an entirely inconceivable name for a real person. It’s not like “Fredo Play-doh” or something, that would be ridiculous. Honestly, he just shut the whole thing down because I said my name was Freddy Reddy, because he assumed I wasn’t being serious. Not my fault everyone laughed inappropriately, including me. Poor old Freddy Reddy. I wonder what would have happened to Freddy Reddy if his character had been allowed to grow and develop, he might have made something of himself, picked himself out of the gutter, turned the laughter into nods of respect, but alas his life was cut short by an angry drama teacher in a purple top. So when I see Hart Hall, among the many many other things I think of (I have known much better Harts since then), I do think of Mr. Hart, and of good ol’ Freddy Reddy.