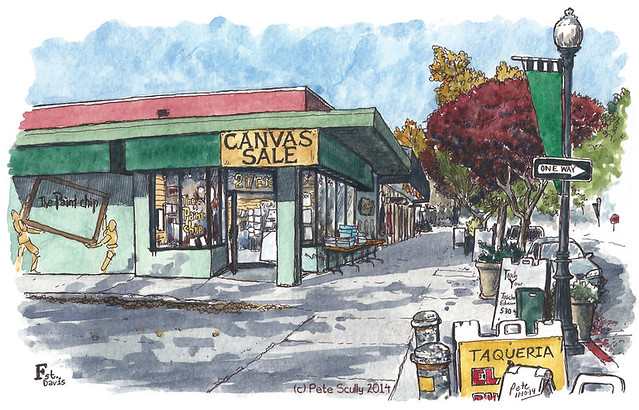 The Fall colours are here in Davis in their brief glory, brief because they take so long to arrive (stupid too-long summers) and then a little bit of Central Valley wind comes along and blows them all over the place…I really need to get out and paint some of these leaves while they are still up above me. Hey speaking of paints, this is the Paint Chip, a friendly art and framing store in downtown Davis, on the corner of the 3rd street block of F St (opposite the old City Hall). I had to sketch one lunchtime and I’ve never drawn this spot before. The sketchmapping of Davis continues. I’ve nearly sketched everywhere, nearly. I considered extending this panorama across F street to include the City Hall Tavern, because then I could have used the extremely hilarious pun-tastic title “Chip and Ale”. Unusually for me however, I decided not to keep on drawing a complicated panorama just so I could use a cheap joke. I have a history of going out of my way just so I can somehow have a not-even-that-funny line to use if the need ever arose. When I was 19 I actually went all the way to the Danish city of Århus, took a long train journey and everything, just so that if anyone ever asked me where Århus was, I could say “in the middle of Årstreet”. Hey I was 19 and it’s still funny all these years later, folks, I’m still getting mileage out of that one, sure I live in America and people don’t know Madness or Denmark or understand anything I say but it’s still funny, that long train journey with only twenty-five quid in my pocket was worth it in the long run. Anyway where was I? Oh yes, the Paint Chip, nice shop, you should go there some time.