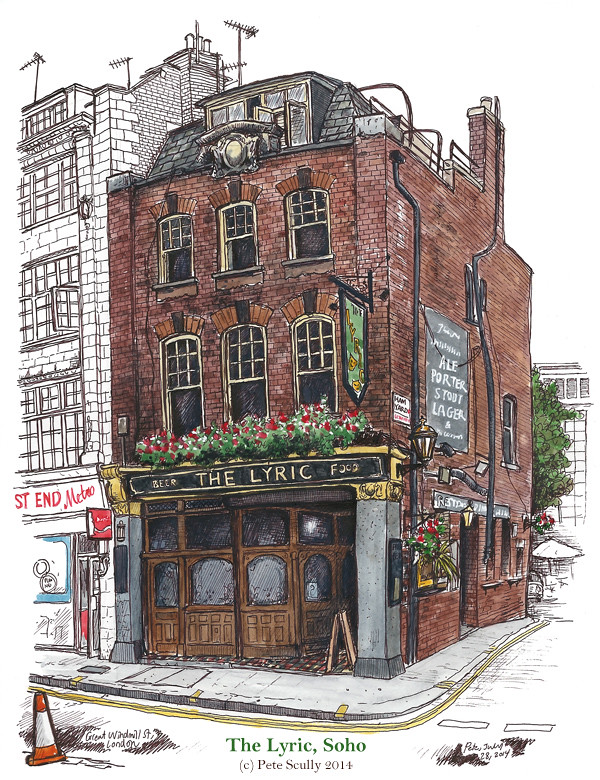 One of the missions I set myself was to draw old pubs in Soho. Pubs…they are a dying breed these days. Remember pubs? they’ll say one day. Pubs were great. So many are closing down, old ones like the Nellie Dean, an old favourite of mine, and those that remain are often modernising, sterilising, losing their uniqueness. I say that, but still I managed to find many great old pubs in London, and people still drink a lot, despite the massive hikes in the price of a pint. Wow, beer is dear now. But for me its the existence of the pub, and the old architecture of the British public house, that I’m drawn to (I actually don’t like a lot of beer in London these days, I prefer the brews of the west coast of America). While back, I did stop by an old favourite, the Ship in Wardour Street, for a great evening. This pub, The Lyric in Great Windmill Street (http://www.lyricsoho.co.uk/), sits on the cusp of Theatreland, and while I’ve never actually been in I have walked by many times wanting to sketch it. So on my first day back I made sure I drew it. I stood opposite on an extremely narrow pavement while delivery vans stopped and started and a local workman, presumably some sort of security guard, I wasn’t sure, stood chatting away on the phone the entire time, joking with his colleague about something called a “jelly cab” whatever that is. He was friendly, and asked if I was an architect, I said no, they work longer hours than me. I did most of the inkwork and some of the paint, but finished off the paintwork later. It is nice taking sketches home to colour in, it gives me more time to sketch other things! Which I promptly did. Anyway I am very pleased with the result and here is another London pub added to my collection. I love Soho. 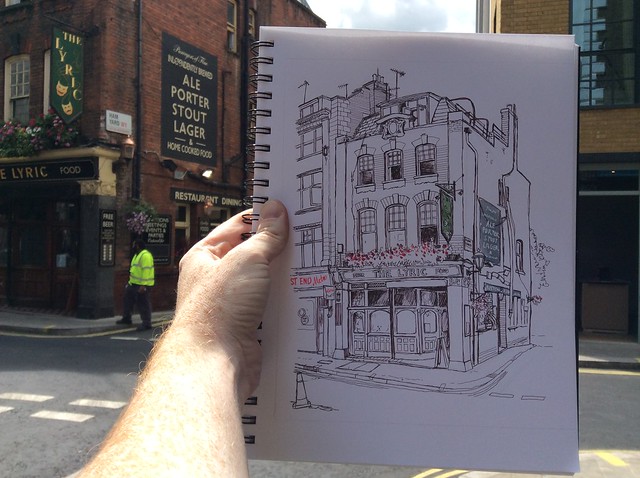