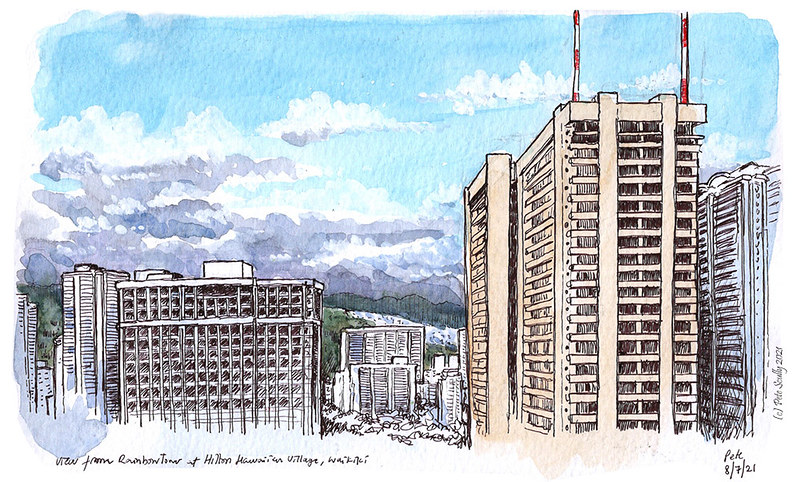 In Hawaii we stayed at the Hilton Hawaiian Village in Waikiki. It’s a historic older resort, Elvis used to go there, so did Michael Jackson, and so did about 15% of the population of the United States at the same time as we were there, I think. Since Hawaii reopened up, everyone wants to go, and they all told us it’s packed. Impossible to hire a car, reservations needed at all restaurants, and a surge waiting to happen. For the most part we did pretty well avoiding particularly crowded areas, although being on the 24th floor, the elevators were a bit of a stress. The ‘four person max’ rule was never enforced (at one point I saw fifteen people get out) and despite the signs that masks had to worn under state law, many people assumed that meant “everyone but me, brah”. On the whole though it was ok, and we loved spending time in our room with the views of the ocean, and the skyline of Waikiki and downtown Honolulu. Above, I drew the view inland, from where many moist clouds would roll out, evaporating before reaching the ocean. I like drawing from high up, but these clouds were the main focus, and I used the white gouache paint on top of the regular watercolour. That’s not something I have done much before, but I saw someone doing it online in a painting video and thought, that looks good. Just poking the brush into the tube itself rather than squeezing the paint onto my already dirty watercolour-box-lid palette. You have to let it dry a bit, but it didn’t take too long. Drawing the windows was a bit tedious so I left that until a couple of days later, you get the general idea. The wind off these hills on this balcony was pretty strong (we had two balconies, as it was a corner room) so I didn’t sit on the balcony to draw, just looked through the big windows, while sat on a comfy chair inside. With a big cocktail, probably. I do like a Blue Hawaiian. 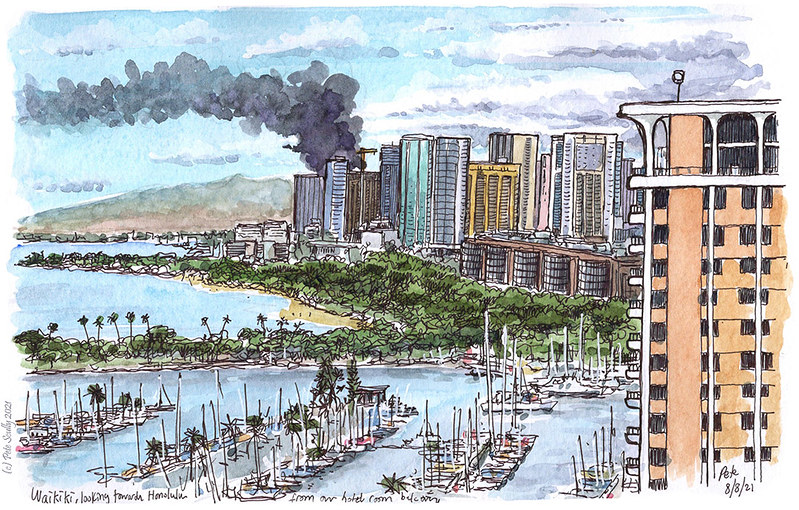 We tended to sit out on the other balcony )called a ‘lanai’ here) which face the view of Honolulu, and the ocean. I would sometimes sit out on the lanai and play my ukulele gently, above the sounds of the city below, or listen to the luau that would take place on the big green next to the lagoon. On the second morning, I woke up and sat out there looking at the view, while what appeared to be a big fire in Honolulu harbor brought a dramatic pillar of black smoke into the sky. Before coming out to Hawaii we had rewatched the series ‘Lost’, which was filmed here, so of course we said it must be the smoke monster. I painted the scene , and eventually the smoke dissipated. I never found out what it was; I suppose I prefer the mystery. Speaking of Lost, wherever you go on Oahu there are places where the show filmed scenes, and the marina in the foreground, very close to the Hilton Hawaiian Village, is one that was used several times. It’s called the Ala Wai Harbor. It’s the backdrop of Desmond and Penny’s photo, and where Desmond got shot by Ben before then punching Ben’s lights out and throwing him into the water, also where the some of the Oceanic Six meet up at night to say “we have to go back tot he island” “no we don’t” “yes we do” etc, and also where Charlie and Desmond (him again) drive a car into the water in the flash-sideways. Spoiler alert if you haven’t seen it, none of that makes any sense, even if you have. Immediately below, not appearing in this sketch, is the lagoon at the Hilton Hawaiian Village. I totally went paddle boarding there, twice. It was the first time I had tried stand-up paddle-boarding, and loved it. I haven’t done it in the ocean yet, next time maybe. I was pretty good at it, I didn’t be falling in or nothing. I should try surfing. When I was a kid I thought I might do lots of surfing when I got older at some point, go to Australia or somewhere far away (not exactly a lot of surfing culture in Burnt Oak), but when I get there the ocean always looks so big and scary, with those waves grabbing you like gigantic wet hands. Still, the paddle-boarding on a shallow lagoon with no current was thrilling enough for me dudes. 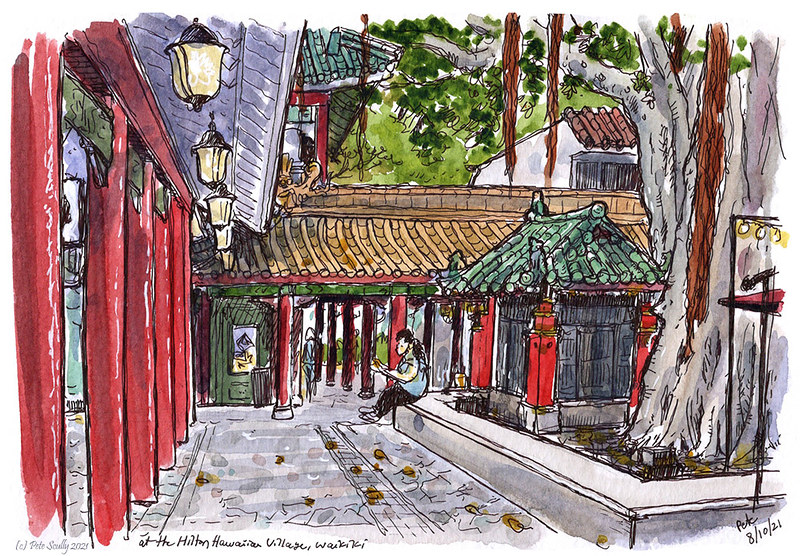 Back down on the ground, this was in the ‘village’ of shops and restaurants at the resort. There was a very Japanese feel to the architecture, but that was far from unusual in Honolulu. I stood in the nice shade and drew while people wandered into expensive watch shops or places selling Hawaiian tea towels or something. I really liked the Asian style architecture. It seemed like there was a lot of Japanese and Korean shops and restaurants in Honolulu. We went to one supermarket called Don Quijote which really felt like being in a Japanese store, with lots of colourful Japanese signage and products everywhere. I had to text my friend Tel who lives in Japan to ask what some things were. I had seen a lot of signs for ‘Mochi’ and it looked like it was popular, my friend Tel said it was very very very gooey. So I decided to get some, and I think he undersold how gooey it was. It wasn’t for me. I ended up getting some delicious poke instead, I do like that, it’s more Hawaiian and is made of uncooked sliced tuna, I got a couple of different kinds. One other day, we went to a nearby donut shop called ‘K-Pop Donuts’, which as the name suggests is Korean. That was a really interesting place, covered in sharpie graffiti from people who’d been there, and it sold a few varieties of these small round balls of pastry, which I believe were Korean donuts. I texted my friend Tel in Japan about them (he spent several years living in Korea before Japan) but he didn’t seem very familiar with them, and just commented on the K-Pop bit, which is some sort of Korean pop music. My son knows what that is. Anyway they were ok, pretty expensive for what they were, but not really somewhere I wanted to go to again. The donut things I did like in Waikiki were of course the ‘malasadas’ you get at Leonard’s, a famous place we went to on our first trip there. This time we picked some up hot and fresh from the Leonard’s truck in Hawaii Kai, south of Honolulu, those were delicious. One other famed local food place we went to for dinner was the Rainbow Drive-In. My wife was very excited to come here, and we grabbed some food and sat outside, although I wasn’t really impressed with my chicken sandwich, the gravy that came with the fries was pretty good. I did see a bloke wearing the new Nigeria football kit though so that was cool. I did however really enjoy both lunchtime visits to the lovely Hula Grill, above Duke’s restaurant at the Outrigger hotel. That’s where we stayed the first time we came to Hawaii and that’s where I discovered the magic of Hula Pie, the best dessert item in the world. It’s like a massive wave made out of ice cream with thick chocolate covering and cookie base and nuts and hot chocolate sauce, and takes about three people to eat it. Here’s a sketch I did of one back in 2017 (with a huge Lava Flow drink to go with it): 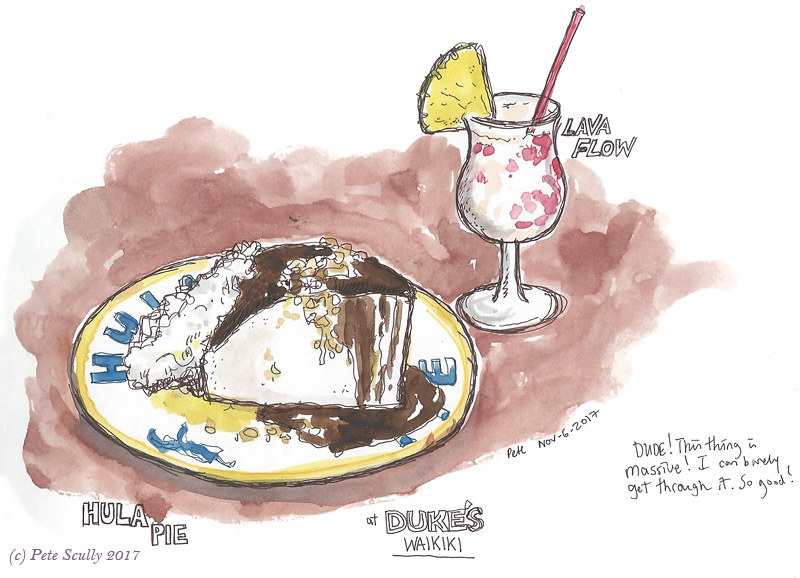 Pretty tasty. I bought one of those Hula Pie plates as a souvenir, as well as a t-shirt which only fits when I don’t eat hula pie. We did have lots of other food in Hawaii this time as well, and I’ll mention the extremely spicy shrimp on a future post, as well as some delicious cocktails, but I’m getting hungry for dinner now so I’ll leave the rest of the Hawaii sketches until next time.

3 thoughts on “Above Waikiki”