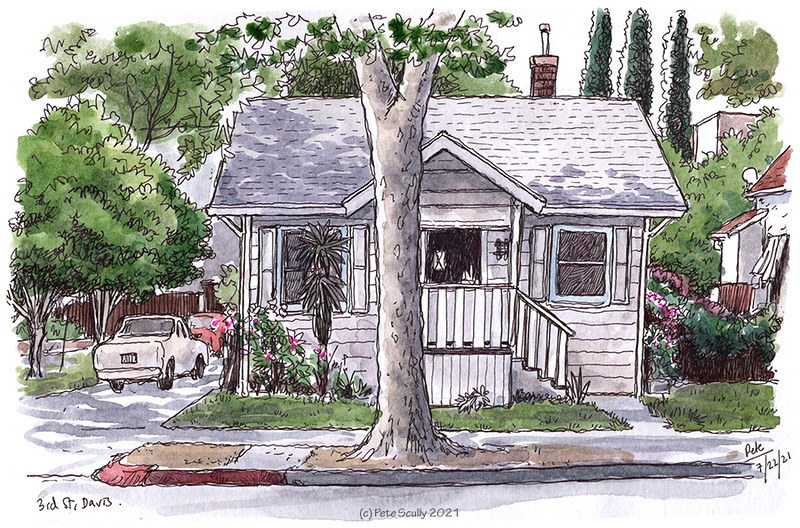 I’ve drawn Third Street a lot of times over the years. Some of it has changed, like the stretch between campus and B, some of it hasn’t, like those houses across from the shops between D and E. It was a hot day, I was downtown after leaving work a bit early to get something cold to drink (not easy on campus in the afternoons these days, those vending machines ain’t being stocked). I got a cold drink from Newsbeat and stood outside to drink it. I needed that cold drink, the hot weather has been too much to bear. I wonder sometimes why I moved to such a hot place, but that hot place is just Planet Earth in general these days. That ship has sailed, it has no choice there’s not going to be any land left if the sea levels keep rising. These long hot summers are depressing though, I don’t do well in heat. I mean, sunshine is nice but a day with some clouds feels like it’s taking a quick breather before the next wave. Today for example it was in the high 90s, but with a breeze and a sky of clouds, aaand tomorrow it’ll be 102, then 106 on Thursday, then 104… dudes, seriously, slow down. Chill out. I did chill out a bit the other day, I went to San Francisco, which was about forty degrees cooler, no exaggeration. Naturally that meant I came back with sunburn, despite layers of sunscreen it always gets through that fog. I’ll post my San Francisco sketches separately of course. I stood in the shade beneath a tree on that very hot day to draw this, because I just needed to draw. I can’t really explain the need to constantly draw stuff. I need the creative outlet, otherwise I get very grumpy. There was a period when I was younger when I kinda gave up on drawing. It was what I loved doing most but wasn’t really going anywhere, and I had so many interests pulling me here and there, music, drama, writing; I still drew, but not as much. When I decided, nah I’m not going to try art school, it was because I wasn’t actually that interested in Art. Or I was, but not as much as other things, like languages, history, travelling, reading, football, football shirts, playing the guitar, writing music, writing stories, girls. It took me a while to realize that even though I was so-so about art in general, I did still love drawing. At some point in my 20s I started drawing again and just kept going, like falling uphill, grabbing onto ideas as I did, and it felt like I was going back to the first thing I ever loved, just picking up a pen in that funny way and just drawing stuff. Yet, I’m never satisfied, there’s always more that needs to be drawn, more to see and put down on paper. So I yearn for big complicated drawings that make my fingers hurt, but sometimes I’m ok just drawing very familiar typical bits of Davis. Like this. A house, straight on, with a tree in front, other side of the street. My mind’s too overheated for anything inventive or envelope-pushing. This is my three-chord, no-nonsense fallback song, with the same old lyrics about the weather. But this is what Davis looks like, through my glasses.